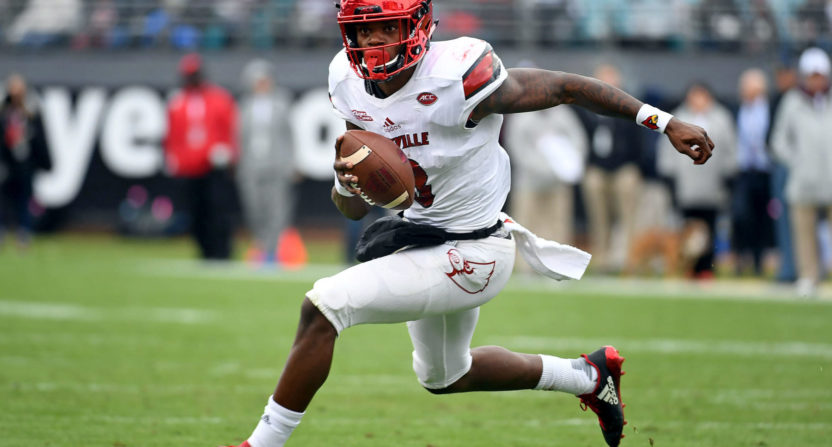 Lamar Jackson is a Heisman Trophy winner. He followed his Heisman season with, arguably, an even better 2017, then announced he was leaving for the NFL. Jackson is 6′ 3″, with the obvious ability to make plays with both his arm and his legs.

As with any college QB prospect, it’s difficult to know whether he’ll succeed in the NFL, although the success of players like Carson Wentz and DeShaun Watson (whose teams tried the novel approach of building an offense around what they’re good at) shows that maybe the transition is getting easier. And yet, predictably, there are teams who view him as a receiver, not a quarterback.

We need not rely on mere anecdotes. The Guardian found last year that black quarterbacks are drafted lower on average than their white counterparts but perform better in the league, suggesting they’re systemically undervalued. A Washington Post study discovered that draft scouting reports disproportionately mention white quarterbacks’ intelligence and leadership, while harping on black quarterbacks’ physical skills and mental deficiencies. It is an empirical fact that quarterbacks of different races are not treated the same in pre-draft evaluation.

Now, the combine is here, and predictably Jackson is being asked to run through drills as a receiver.

Via Jeremy Bergman of NFL.com:

Multiple NFL teams have requested for the dual-threat Lousiville quarterback to work out as a wide receiver, in addition to working out as a QB, Good Morning Football’s Peter Schrager reported Friday, per a source informed of the situation.

Jackson hasn’t announced yet if he will work out as a wideout.

Putting aside the obvious racial component for a second, this is just irresponsible talent evaluation. It’s the equivalent of a baseball team drafting a successful starting pitcher who doesn’t fit the typical profile (he’s too short, doesn’t throw hard enough, etc.) and immediately moving him to the bullpen in the minors. That used to happen, but it happens much less often now, because most baseball teams are smart enough to realize that a successful starting pitcher is worth more than a successful reliever.

Why give up on something that could work? The analogy is even more pronounced in the NFL, where quarterback is arguably the most important position in sports.

Andy Reid, at least, seems to understand that. From NFL.com again:

The Chiefs coach took the podium at the NFL Scouting Combine on Wednesday and sarcastically dismissed the idea that the 2016 Heisman Trophy winner would be best served by ditching quarterback in favor of a different position at the next level.

“Yeah, I think you probably want to try it there (at quarterback) and see,” Reid said. “He’s pretty good. I would. I’d give that a whirl. I could handle that, yeah.”

“Yeah, I’m not much on that,” Reid said (when asked his thoughts on other people saying Jackson is best-suited as a WR). “I want to bring him in. Let’s exhaust that other thing that we know he’s good at and see. I’m just saying in general. This is a general statement: Let’s get him in and let him wing it a little bit and see how he does. We’ll be able to fit some things in there I’m sure.”

Not everyone has been so logical, though. There’s been plenty of pushback against Jackson already, even from normally reasonable voices.

1. This is where an agent could really help Lamar Jackson

2. I get standing your ground and saying, "No I'm a QB" but I think you also run the risk of pissing teams off.

3. This tells us what at least some teams think of his prospects https://t.co/9DqHfVNKJ1

Yes, heaven forbid a player not genuflect at all times! Why would Lamar Jackson care about the feelings of an organization so backwards it would get upset by something like this?

Oh, and then, there’s this very reasonable point as well:

It's funny how we ask these cats to be competitive/aggressive,but when they do it in a way we don't like, we put labels on them. https://t.co/doGRhme1H0

i'm assuming he'll refuse, but i'm also curious which teams asked. if a team not looking for a qb asked, i wouldn't find it nearly as offensive as if, say, the browns or jets did. https://t.co/lFMqlrvMFl

Why is it racism if someone thinks Lamar Jackson is a receiver? It’s not. It’s just likely crummy scouting.

it might not be, but it's irresponsible to say outright that it's not. or that racism can't contribute to being a crummy scout. https://t.co/eS1EzZvzZ5

And that’s the crux of the point. We can’t know, and to assert otherwise (especially when it comes to black quarterback prospects) is just not the right line to take. Lamar Jackson wants to play quarterback in the NFL. His college career should earn him that chance. Hopefully at least a few teams are smart enough to give it to him.