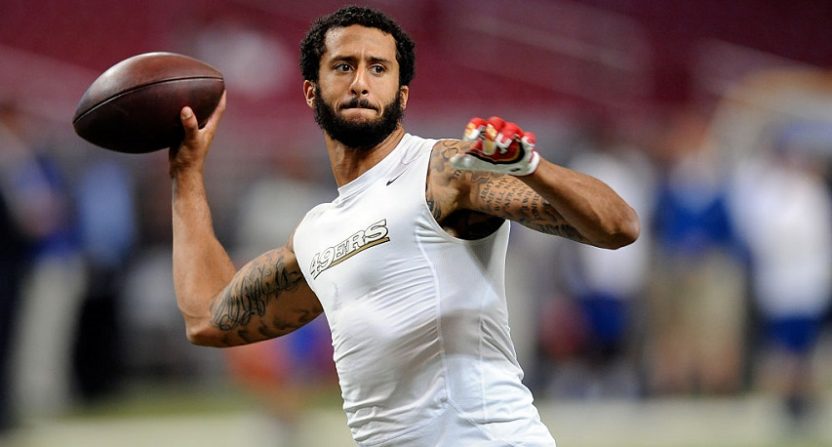 The Baltimore Ravens have been tying themselves in public knots in recent days as they decide whether or not to sign free agent quarterback Colin Kaepernick. The team even went as far as to issue a public statement over their wishy-washy decision making.

It’s more likely than not that the Ravens will pass on Kap as they try to head off any perceived pushback from fans over the embattled quarterback’s National Anthem protests last season while with the San Francisco 49ers. In fact, there’s a reasonable possibility that no NFL owner will be willing to take a chance on Kaepernick, who committed the egregious sin of taking a political and social stance during a football game. Unless, maybe, he gets a haircut.

Many have been quick to point out the hypocrisy in the decision. While Kaepernick may or may not be a capable starter anymore, he’s certainly talented enough to be a solid No. 2 on the depth chart (his quarterback rating of 90.7 last season was 17th overall in the league). Meanwhile, some of the same owners unwilling to sign him over his beliefs are more than happy to sign a player accused of sexual assault, domestic violence or other crimes.

It’s a hypocrisy that Philadelphia Eagles safety Malcolm Jenkins was happy to point out on Thursday.

“This is just some other teams being, quite honestly, cowards, to say that they’re afraid of backlash to sign someone to make their team better when fans’ input has never been in the equation when it comes to signing people in the past,” Jenkins told delawareonline.com. “It’s certain owners’ way of making an example out of [Kaepernick] to discourage anybody else from doing what he did.”

While Kaepernick received the attention for his kneeling protest, Jenkins was among a handful of other NFL players who also performed some kind of protest during the anthem. Jenkins stood but raised his fist while the song played.

“Four months ago, there was a debate as to whether [Kaepernick] is talented enough or whatever,” Jenkins said. “I think at this point in time when you look at the quarterbacks who have jobs around the league, and the amount of owners and GMs who have only spoken of what fans would think about his stance. I think it’s safe to throw out that talent argument, and basically focus on the fact that he doesn’t have a job solely because he didn’t stand for the anthem last year, even though he already expressed that he planned on standing this year.

“That message, to me, is loud and clear from owners as to where their priorities stand and how they go about picking and choosing who they want on their teams. It’s definitely unfortunate, but it’s shining a light on just how the NFL operates and what we deem as acceptable. It really has nothing to do with what’s right or wrong, but what affects dollars. That’s business as usual, but I think it’s an unfortunate precedent to set.”

Current Eagles wide receiver Torrey Smith, who was Kaepernick’s teammate with the Niners last season, echoed that sentiment but also said he understood where the other side was coming from.

“I think a team has to weigh that. That’s any business. If you feel like something you’re bringing in, what comes with it? But I would say that teams are willing to sign people who abuse women, people who do stupid stuff and get locked up, which is embarrassing. But the guy protested, and he said he’s not protesting again. He said he’s done with the protests. He’s still going to continue his work in the community. My thing is we have our priorities backwards. He protested. People are still mad at him for actually protesting instead of what he’s protesting for.”