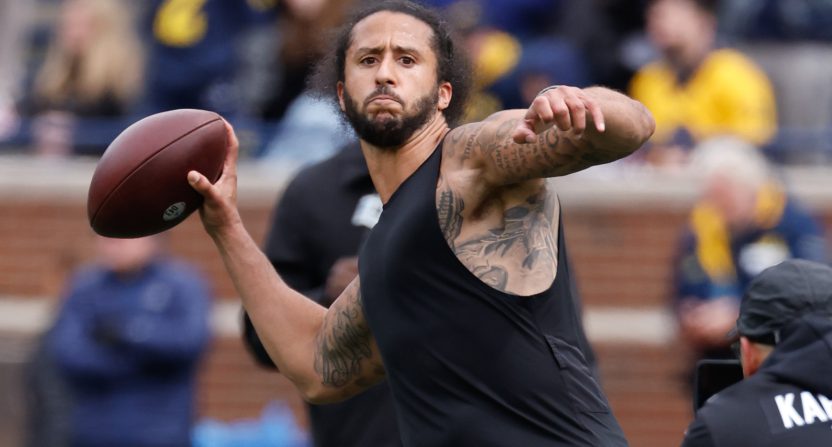 If Colin Kaepernick ever does return to the NFL, he’ll have the support of Las Vegas Raiders team owner, Mark Davis.

Speaking to Monte Poole in an Interview with NBS Sports Bay Area and California, Davis voiced his support for Kapernick returning to the NFL. He even added that he’d be fine with Kaepernick on the Raiders.

"[Kaepernick] sacrificed a lot of the things that he could've been doing in his life to get a message across about police violence and equity and inclusion in America, and I stand by that."

“I believe in Colin Kaepernick,” Davis said. “And he deserves every chance in the world to become a quarterback in the National Football League. I still stand by it. If our coaches and general manager want to bring him in or want him to be the quarterback on this team, I would welcome him with open arms. I think Colin is a very misunderstood human being.”

Davis’ words drew a lot of support from fans of the Raiders.

Would love to see this https://t.co/sWdj4mzEsU

he probably wouldn’t best out mullens but he definitely beats gilbert https://t.co/RzD35WH8s8

Kaep would be a sick #2 option, and I hope the Raiders do it. Be true to our roots of giving outcasts new life. https://t.co/xQvSNov4dv

There’s also a more cynical take that’s hard to ignore, regardless of what one’s feelings on Kaepernick are. Davis is the boss of an NFL team. Kaepernick has been out of the league for five straight seasons. If Davis supports him coming back to the NFL, how come the Raiders haven’t made that happen yet?

Empty words from Mark Davis, as the team has signed many backup QBs since Kaepernick last played. They even kept interception machine Nate Peterman on the roster instead of even giving Kaep a tryout. "every chance in the world"? Is LV not part of the world?

Kaepernick has been in the news recently for his throwing performance during Michigan’s spring game. He’s been linked to different teams in the weeks since that performance but has remained unsigned since the end of the 2016 season.

Kaepernick clearly still has arm strength. But given how long it’s been since he last played, it is fair to wonder how well he’d play against NFL competition. But given the number of below-average backup and even starting quarterbacks there are in the NFL, it’s also fair to wonder how much worse he could be.

The quarterback situation in Las Vegas is steady, with Derek Carr holding the starting position down. And while he’s not a good starter, Nick Mullens does represent a good backup option. So, the Raiders may not be the most natural fit. But if they brought Kaepernick in and gave him a chance to perform during the preseason, it would potentially open the door for an NFL return, even if that’s not with the Raiders.