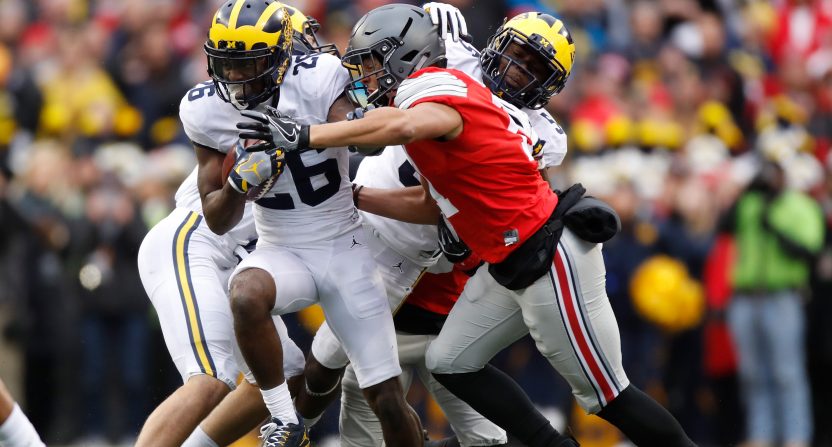 Jourdan Lewis, among the top cornerback prospects entering the NFL Draft next month, could be bringing some legal baggage with him. The former Michigan standout has been charged with misdemeanor domestic assault, according to a report from MLive.com on Wednesday.

Lewis has been accused of assaulting his girlfriend. Ann Arbor police responded to a call from Lewis’ girlfriend early Wednesday morning but were unable to confirm if an assault had happened or who would have been responsible for the assault. A more thorough investigation determined Lewis was at fault for an assault, resulting in a misdemeanor domestic violence charge.

Jourdan Lewis was not arrested last night. Police responded to a DV complaint and released him at the scene. Charge came later Weds.

Lewis took to Twitter to pretty much deny the situation publicly, seemingly suggesting his girlfriend is attempting to ruin his life.

The tweet, which has since been deleted, said “It’s sad that somebody would want to control you so bad they would ruin your life over it.”

Lewis will have to appear in court at a time to be determined, so we don’t know at this time just how long this situation will carry on. For now, it does nothing but hover a black cloud above Lewis and give him something he must address with NFL suitors between now and the draft.

Even if this is resolved before the draft, Lewis will still have to respond to it to NFL teams interviewing him, because NFL franchises will want to thoroughly vet the situation before they are ready to invest significant amounts of money in him.

Let’s be perfectly clear: There is never a good time to be charged for domestic violence because it truly is a disgusting and awful act that never should occur in the first place. But in Lewis’ case, the timing really could not have been much worse. Not with the NFL Draft coming up. Not at a time when domestic violence cases are gaining more and more widespread coverage and attention. Not when the NFL and its franchises are, in theory, more proactively confronting domestic violence.

Even if the charges against Lewis end up being dropped, the timing of when it happens could be critical. If he reaches the NFL Draft with this looming above him, his draft stock will likely take a hit. How severe a hit is unknown. Before the domestic violence charges, Lewis was projected as a second-round pick.

Lewis is certainly not alone in bringing a possible history of domestic violence to the NFL. The league is full of this kind of stuff, of course, and it figures to add more to the collection with Oklahoma running back Joe Mixon turning pro.