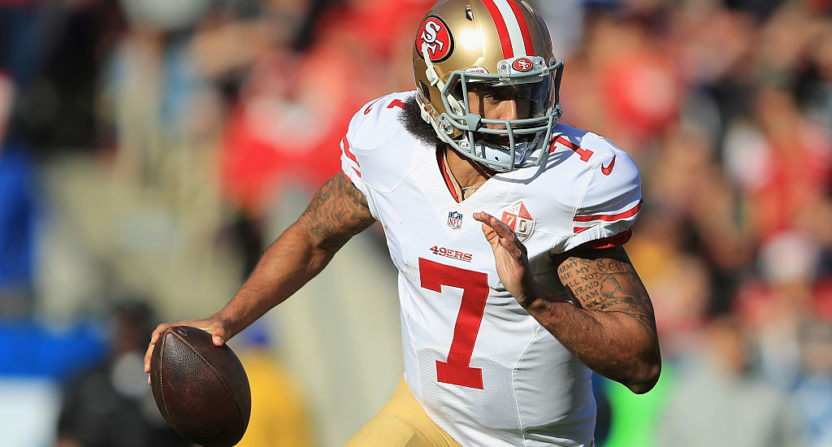 The NFL starts in two weeks, and Colin Kaepernick is still a free agent. In a survey of 50 NFL coaches, evaluators and executives conducted by ESPN’s Mike Sando, Kaepernick placed 29th among quarterbacks, ahead of six starters. That sounds like a pretty clear sign he deserves a roster spot, at least as a backup if not as a starter.

Last season, before Kaepernick began protesting during the national anthem, he ranked 28th in the same survey, suggesting his skill level hasn’t changed much in the eyes of NFL bigwigs. But as some anonymous quotes from Sando’s voters show, it’s more complicated than that, and the main reason why Kaepernick is still a free agent is because of his national anthem protests.

One exec told Sando that Kaepernick’s position hurts him. Franchises expect quarterbacks to be leaders who always put the team first, and Kaepernick pursued a personal agenda on the job:

“It is really not about his ability,” an exec said. “It’s about the risk of what happens to the team concept when you sign a guy — a quarterback — who has put his personal agenda ahead of what we are all charged to do, which is put the team first. As a team builder, I cannot risk that happening again, especially for a borderline starter who needs the entire offense catered to his style.

“Tom Brady or Philip Rivers would never consider making a stand on something like that, and it’s just because it’s not the place. I don’t disparage what he did. I understand and I’m all for people standing up for a cause, just not while they’re at work.”

While other players who have participated in anthem protests — we even saw a dozen Browns players kneel on Monday — haven’t faced the same level of controversy, that could be because they play positions that don’t spend as much time in the limelight and don’t carry the same expectation of team leadership.

One common argument for why Kaepernick should be on a roster is even if he doesn’t start, he’s skilled enough to be one of the league’s best backups. Sando’s survey shows folks around the NFL agree with that. So surely someone might still take him as a backup who’d sign for cheap, right? One coach attempted to debunk that theory:

“As far as his prospects as a backup, I don’t think he is being blackballed in terms of rich white owners saying, ‘We are not hiring this guy,'” a defensive coordinator said. “I think coaches are like, ‘Look, if this kid is not starting for us, why are you bringing in distractions not for a starter? We have a pretty good sort of locker room and mesh here. What is the risk-reward?’ I don’t think anyone is to the point of making him the starter, and that is the bubble he is getting caught in.”