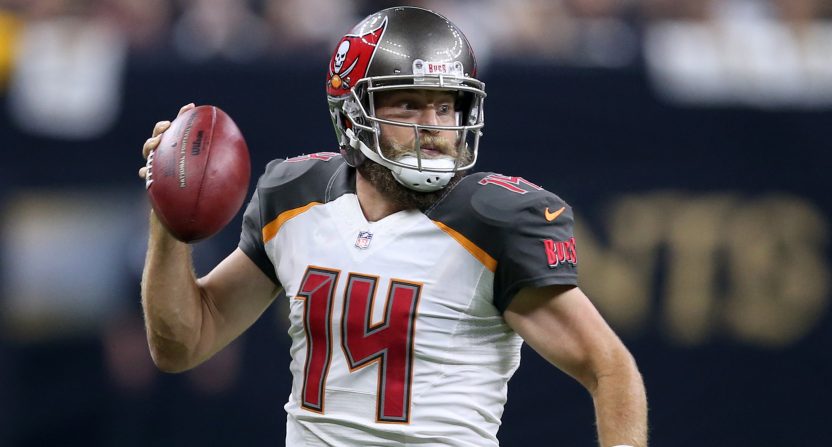 MVP talk after just one game? It’s never too early to start gauging the NFL MVP race, so we’re doing exactly that despite the fact the 2018 regular season is only six percent complete.

Some of the names listed here might look silly in the weeks to come. But here are the top 10 candidates that have emerged after Week 1.

1. Green Bay Packers QB Aaron Rodgers: He led one of the largest and most impressive comebacks in NFL history, and he did it on one leg. Come on!

2. Tampa Bay Buccaneers QB Ryan Fitzpatrick: The career backup was practically perfect while starting in place of the suspended Jameis Winston Sunday in New Orleans, generating five touchdowns (four as a passer, one as a rusher) in a shocking road victory for the underdog Bucs.

3. Kansas City Chiefs WR Tyreek Hill: The third-year speed demon scored three touchdowns and picked up 20-plus yards on six separate plays as a receiver/punt returner in Kansas City’s road victory over the Los Angeles Chargers. He finished with 169 receiving yards as the focal point of the most explosive offense in the NFL.

4. Denver Broncos OLB Von Miller: Hard to believe Miller has yet to win a Defensive Player of the Year award, but he might be the leader of the pack entering Week 2 after recording three sacks and two forced fumbles in a victory over the Seattle Seahawks.

5. New England Patriots QB Tom Brady: He threw a pick and they cut it a little close against a struggling Houston Texans team, but keep in mind that the reigning MVP had next to nothing to work with and still posted a triple-digit passer rating.

7. Washington Redskins QB Alex Smith: Last year’s highest-rated passer picked up where he left off, this time as a member of the Redskins. Completion percentage above 70 and a 118.1 passer rating in a blowout road victory.

8. New York Jets QB Sam Darnold: He received plenty of help from the defense and special teams, but the rookie No. 3 overall pick was essentially perfect after throwing a pick-six on the first snap of his career.

9. Chicago Bears OLB Khalil Mack: That first-half performance against Green Bay was legendary, but the legend lost some luster win he disappeared in the second half and the Bears blew a big lead. Still, he’s in contention with a sack and a pick-six.

10. Pittsburgh Steelers RB James Conner: Le’Veon Bell’s substitute carried the Pittsburgh offense against Cleveland, generating 192 scrimmage yards and two touchdowns. But the Steelers settled for a tie, and that might not have been the case had Conner not fumbled inside his own red zone in the fourth quarter.