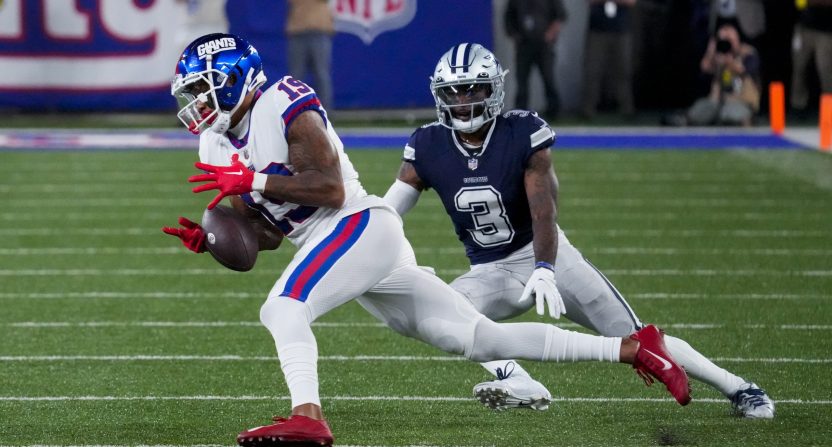 The Dallas Cowboys — led by backup quarterback Cooper Rush — took down the New York Giants 23-16 on Monday night at MetLife Stadium. It was another ugly performance by the New York passing game, and their final offensive play summarized how things are going, with quarterback Daniel Jones throwing an interception as wide receiver David Sills fell down (and wide receiver Sterling Shepard suffered a non-contact knee injury on the other side of the field and was carted off).

Zero of those completions were to Kenny Golladay.

Golladay was targeted three times, and he had a brutal drop in the fourth quarter. If he makes this catch, there’s a good chance he’s able to get a first down on 3rd-and-14 with the Giants trailing by seven:

Kenny Golladay drops it on third down, and the Giants will punt #TogetherBlue pic.twitter.com/BIJ8AddyfV

This comes after Golladay voiced his frustrations on his role in the offense to the media earlier in the week.

On Wednesday, Golladay said, “I don’t agree with it. I came here to play.” He added, “I should be playing regardless.”

Kenny Golladay can't complain about playing time and then do that.

Dropped pass. Could have gotten a few more yards and first down. #Giants will punt.

NFL Network’s Ian Rapoport reported earlier on Monday that the Giants could look to trade Golladay.

Could the #Giants trade WR Kenny Golladay if his situation becomes untenable? It's possible.

Before tonight's game against the #Cowboys, a look at how it could work and the options for what's next: https://t.co/nmXpt6Y3mz

“The Giants could trade Golladay to an interested party, and likely the only way it would work is if New York pays the bulk of his contract in exchange for a late-round pick, sources say. That is a possibility.”

After Golladay’s goose egg on Monday Night Football, the trade rumors will only increase.

Here’s a look at how the NFL world is reacting to Golladay’s MNF whiff:

He’s on the 2nd year of a 4yr/$72M contract. pic.twitter.com/PNZBfLOS6C

Golladay wondering why he only gets limited snaps. There’s your answer

The Golladay story is a fascinating one.

Kenny Golladay. What happened to this dude?

The refs just robbed Golladay of one of the 5 catches he'll have this season.

At this rate, the Giants are gonna have to send the Bears draft picks to take Golladay off their hands.