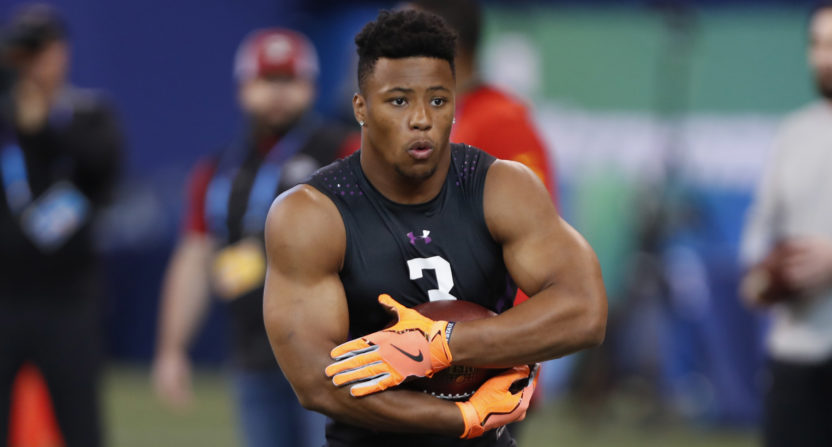 The 2018 NFL Scouting Combine finished Monday in Indianapolis, and a few stories emerged from the annual workout of college prospects.

Louisville’s Lamar Jackson defiantly insisted he was a quarterback, despite some teams wanting to see what skills he offered at wide receiver. With his bench press and 40-yard dash performances, Central Florida linebacker Shaquem Griffin showed he’s to be taken seriously as a NFL prospect. Oklahoma offensive lineman Orlando Brown had one of the worst Combine showings ever.

So what effect has the Combine had on the NFL Draft thus far? Yes, it’s still too early to predict which players will go where in the 2018 NFL Draft. No, we don’t care. Don’t be a parade-ruiner and just enjoy these inevitably off-base projections for the first 10 picks with the draft seven weeks out.

1. Cleveland Browns: Saquon Barkley, RB, Penn State — Barkley looks like a potential generational talent, the quarterback class isn’t top-heavy and I think the Browns would prefer to sign a veteran like AJ McCarron before pairing him with whoever they land with a later pick.

2. New York Giants: Josh Rosen, QB, UCLA — Rosen is the best quarterback in this draft, and it’s not even close. The Giants would probably love Barkley, and they could trade this pick. If they don’t and Barkley is gone, I think they go Rosen and groom him behind Eli Manning.

3. Indianapolis Colts: Bradley Chubb, DE, NC State — Time to finally land that elite pass-rusher, and Chubb is worthy of a top-three selection. The guy looks like a perennial Pro Bowler.

4. Cleveland Browns: Sam Darnold, QB, USC — I could see them trading down, but it’ll be hard to resist Darnold here. The squeaky-clean natural leader has the ability to become an NFL franchise quarterback quickly.

5. Denver Broncos: Quenton Nelson, G, Notre Dame — I could see them trading up for Rosen or Darnold or being damn pissed when they miss out on both, as I don’t think they want a boom-or-bust project like Josh Allen. That said, I think they’ll invest in a free-agent quarterback and take the best player available to better support whoever they use under center.

6. New York Jets: Josh Allen, QB, Wyoming — The Jets, however, are the perfect team for the somewhat raw but extremely tantalizing Allen. This is practically a lock if Kirk Cousins doesn’t come aboard.

7. Tampa Bay Buccaneers: Minkah Fitzpatrick, S, Alabama — Feels like a pretty clear-cut “best player available” spot for the Bucs, who could certainly use a presence like Fitzpatrick in the secondary. I also wouldn’t rule out a trade down here so that they could take an offensive lineman later in the first round.

8. Chicago Bears: Denzel Ward, CB, Ohio State — They’re getting Cameron Meredith back from injury and they’re reportedly in on Jarvis Landry. Meanwhile, starting corners Prince Amukamara and Kyle Fuller are about to hit free agency. Let’s see if they can get another Marshon Lattimore out of Ohio State.

9. San Francisco 49ers: Calvin Ridley, WR, Alabama — They’ve locked up Jimmy Garoppolo, now it’s time to get him as much support as possible. Ridley looks like the complete package and is ready to contribute ASAP as a three-year starter coming out of the SEC.

10. Oakland Raiders: Roquan Smith, OLB, Georgia — They’ll have trouble deciding between Smith and enticing former Washington defensive tackle Vita Vea. Regardless, they need to do more to bolster that defense beyond the edge-rushers. This helps.