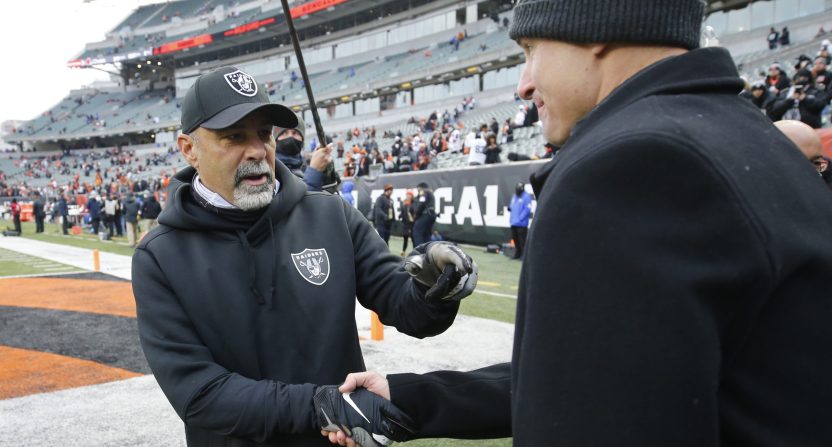 Rich Bisaccia took over as interim coach of the Las Vegas Raiders on October 11 after Jon Gruden resigned following the revelation of racist and homophobic emails he’d sent. At the time, the Raiders were 3-2 and had lost two in a row. Bisaccia led the team to wins in their next two games and they eventually finished with a 10-7 record as he became the first interim head coach since Bruce Arians in 2012 to lead their team to the postseason.

While nothing in the NFL world is ever certain, many assumed that since Bisaccia was well-liked by his players and he’d succeeded in getting to the playoffs, the interim label would be removed from his title and he’d get the chance to be the head coach moving forward.

However, it hasn’t quite worked like that for owner Mark Davis, who likely has his eye on a home-run hire like Jim Harbaugh or Bill Belichick protégée Jerod Mayo. Still, the drumbeat for the Raiders to maintain continuity and give Bisaccia the chance he’s earned has gotten louder in recent days. Finally, per Ian Rapoport, the interim coach is getting his chance to make his case.

The #Raiders will conduct their interview with interim coach Rich Bisaccia today for their head coach job, source said. His chance to stake his claim.

While some feel that Bisaccia shouldn’t even have to interview (what is he going to tell Davis that he already doesn’t know), others wonder if this is just a courtesy move before the Raiders select someone else.

Interview… shouldn’t they know him by now?? https://t.co/q4fzeMi5a2

His season should speak for itself. They would be wise to have him as their head coach https://t.co/sPw1ljsgWC

They should just give him a hand written thank you note & go get Harbaugh https://t.co/kY1sancxtP

It's insulting to Bisaccia that he would even have to interview for the job.. https://t.co/d2JgFDbP4p

No word on when the Raiders might make their decision but there will be a lot of people disappointed if Bisaccia doesn’t get the job.