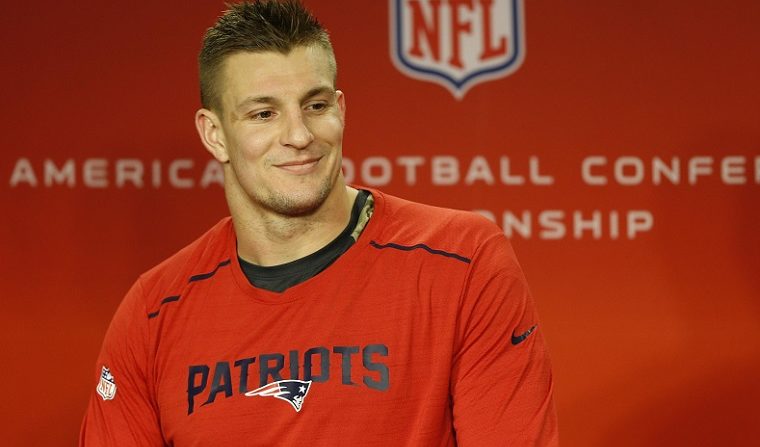 We’ve known for some time that New England Patriots tight end Rob Gronkowski has been giving thought lately to his post-football career. Following the Patriots’ loss in Super Bowl LII, Gronkowski wouldn’t commit to returning for the 2018 season, fueling speculation that he might retire.

Among the possibilities that have been speculated upon for Gronk are a stint in professional wrestling, where he would potentially be an instant star based on name recognition, or a jump into movies, where he could possibly be Hollywood’s next action hero if he shows enough promise as an actor and personality. Though he’s surely considering many options, it appears that Gronkowski is at least dipping his toe into acting.

According to The Tracking Board’s Jeff Sneider, Gronkowski will play a role in an upcoming action movie titled Boss Level, which will star Frank Grillo and Mel Gibson. In what sounds like a Groundhog Day/ Edge of Tomorrow type of story, Grillo (perhaps best known for starring in two of the Purge movies and a bad guy part in two Captain America films) will portray a special forces vet who dies every day in an endlessly repetitive loop of hell. The report doesn’t say who or what Gibson will be playing, but let’s assume he’ll be the bad guy. Naomi Watts and Annabelle Wallis (The Mummy) are also part of the cast.

What about Gronk? No word yet as to whether he might play someone who helps out Grillo or is hired muscle for Gibson.

Boss Level will be directed by Joe Carnahan, who’s helmed action films like Smokin’ Aces, The Grey (which Grillo was in) and The A-Team. He’s also attached to direct an American remake of The Raid, viewed by many as one of the best and most influential action movies of the past 10 years. Carnahan’s movies are typically high-octane, over-the-top action, so Gronk will probably  be allowed to be Gronk.

Perhaps Gronkowski is still taking the offseason to contemplate and recuperate. But now that we’re into the new league year in the NFL with the peak free agency period passed and the draft coming up, the presumption is that Gronk is likely to return this coming season. He has two more years on his current contract, according to Spotrac, during which he’s set to be paid a total of nearly $19 million.

Though he demonstrated exactly what an impactful player he still is in that Super Bowl — catching nine passes for 116 yards and two touchdowns — Gronkowski’s status was in doubt during the two weeks leading up to the game because of a concussion he suffered in the AFC Championship Game. He’s dealt with a torn ACL and a herniated disc. His back has required three surgeries, along with the knee that needed to be repaired. He’s undergone ankle surgery and four different procedures on his forearm.

Nine different surgeries to repair the body would likely compel anyone to think about a different career.

Hopefully, we’ll learn more details about Gronkowski’s role in Boss Level in the weeks to come. Presumably, the movie is being filmed during the offseason periods when Gronk wouldn’t risk coach Bill Belichick’s wrath by playing action hero when there’s football activities taking place in Foxboro.