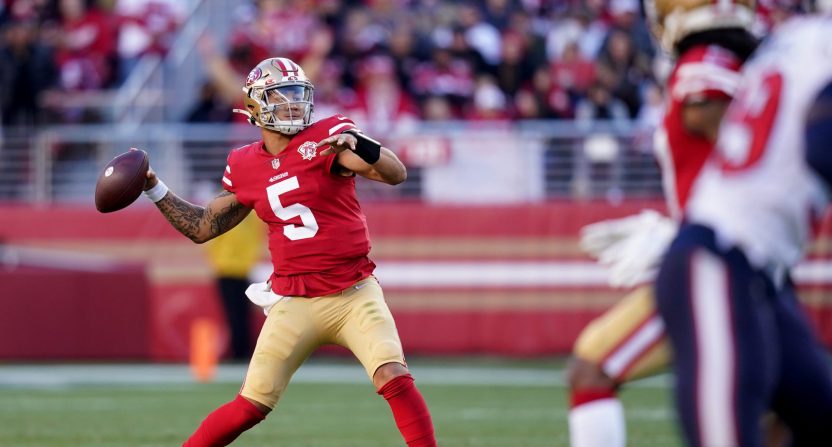 With Jimmy Garoppolo likely on his way out of town, the presumption is that the San Francisco 49ers will turn to Trey Lance, who they drafted No. 3 overall in the 2021 NFL Draft, to be the starting quarterback in 2022. And at least one analyst isn’t sure it will pan out.

"From an injury standpoint, he didn't prove he can stay healthy. From a quarterbacking standpoint, I didn't see enough." pic.twitter.com/BUqVE2137j

“Of all the rookie quarterbacks last year, I am the most concerned about Trey Lance. That includes Justin Fields. I just think from an injury standpoint, he didn’t prove that he could stay healthy. From a quarterbacking standpoint, I didn’t see enough to say, ‘You know what? We can build around XYZ.”

“He’s built physically. But those attributes got him hurt this year. I am terribly concerned about him. But if he doesn’t pan out, Kyle Shanahan and/or John Lynch won’t have a job. Because they went to Jed York and 49ers ownership and said, ‘Hey this is our guy.’ So he has to pan out. But I am truly, truly concerned about Trey Lance.”

McFarland is undeniably right about one thing. Lance is certainly the most unknown of the 2021 rookie first-round quarterbacks.

He attempted 71 passes during the 2021 season. The next-lowest of the 2021 first-rounders was Fields, who attempted 270 passes. Lance started two games, which produced inconclusive results. In those two games, he completed 59.6% of his passes with two touchdowns, two interceptions, and an 83.9 passer rating. He added 24 carries for 120 yards in those two starts.

There’s some good to go off of but Lance is far from a proven quarterback. He also went to a small college and didn’t play at all in 2020. So, even before he was drafted, Lance was seen as a high-risk, high-reward pick. That assessment remains valid.

Further complicating that is where the 49ers are. San Francisco is not a rebuilding team looking to become respectable. The 49ers aren’t even an average team looking to compete for a postseason spot. No, San Francisco nearly won the Super Bowl in 2019, suffered through a disappointing injury-riddled 2020 season, got back to the playoffs in 2021, reached the NFC Championship Game, led by 10 going into the fourth quarter but lost to the eventual Super Bowl Champions, the Los Angeles Rams.

The 49ers are knocking down the door to winning a championship. In 2022, the goal is very clearly to knock down that door. Those expectations have brought the suggestion that San Francisco might look at Tom Brady to be the quarterback. If Brady does opt out of retirement, then Lance being the starter could wait another year.

But assuming that doesn’t happen, Lance will have a lot on his shoulders and legs in 2022. As a rookie, he carried the least amount of pressure of the five first-round picks in 2021. But as a second-year quarterback in 2022, he’ll have significantly more pressure than any of his Class of 2021 counterparts.