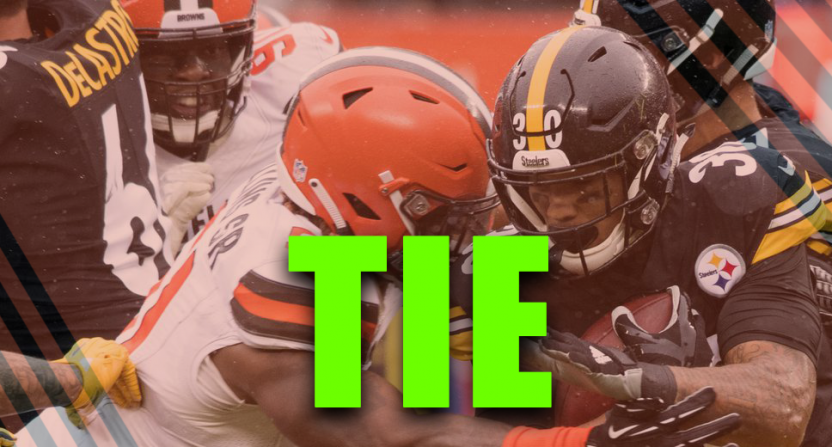 Take it from a soccer fan, people in this country hate tie games. Soccer fans begrudgingly put up with it but it’s a reason why some people can’t get into soccer. Given the distaste for tie games in the United States, the NFL inexplicably decided that they wanted to move OT periods from 15 to 10 minutes in 2017. Anyone with half a brain, but apparently not Roger Goodell, immediately realized that the five minute drop would increase the likelihood of tie games.

While there weren’t any tie games in the 2017 season, we immediately got one in Week 1 of the 2018 season as the Pittsburgh Steelers and Cleveland Browns embarrassingly played to a 21-21 draw in rainy Cleveland conditions. Well, let me clarify, the Browns weren’t embarrassing. The Browns, coming off a 1-15 and 0-16 season, actually played well considering. The Browns forced six turnovers, including four interceptions off Ben Roethlisberger and a fumble each off of Ben and James Conner.

The Steelers, on the other hand, were terrible. Despite high stats for the skill players, they committed stupid penalties, including a stretch where they scored touchdowns on three consecutive plays because penalties invalidated the first two. The Steelers largely tried to find ways to blow this game with their terrible play and you could argue that they couldn’t even do that right because they didn’t even lose. One of the few Steelers players who played well, despite a fumble, was Le’Veon Bell’s replacement James Conner, who ran for 135 yards and two touchdowns along with five receptions for 57 yards.

This is a team who has done nothing but talk about Bell’s contract situation all week. They didn’t look like they prepped for the Browns at all. All they did was talk to the media about Bell and whether or not he should get paid. The other 31 teams know to leave that in-house and not give the media anything to talk about but the Steelers seem like they’re too stupid to do that because they’ve done that for years. From Mike Tomlin cursing out the Patriots while Antonio Brown livestreams it on Facebook, to overlooking the Jaguars for the Patriots in the playoffs that the Jaguars beat the crap out of them (spare me the 45-42 logic, the Jags dominated them), this team has been mentally and psychologically weak for years. They don’t need to have the other team psych them out, they’ll gladly do it themselves. In many ways, the media’s favorite team is the Steelers. Not in a “Here we go Steelers, let’s root them to win” kind of way but because they provide the content no other team comes close to providing.

I have no clue why people still think this Steeler team is a Super Bowl contender. It helps they’re in a weak as hell AFC and an even weaker as hell AFC North but they gotta play against tough teams in the playoffs. In addition, they still haven’t beaten the Patriots in the playoffs. In all this time, the Steelers haven’t done it. And I have to imagine, not only will the Patriots be in the playoffs, they’ll probably have home-field advantage so if the Steelers don’t screw things up against the Jaguars or the Chiefs or someone else in an earlier round, they’ll get beat by the Patriots.

Today showed that the Steelers have maintained their status of being the absolute antithesis of their 70s glory. They look great with big, flashy plays but they have nothing when you pull back the curtain and actually see them as they are. While they beat a Super Bowl contender one week, they come back and play horribly against a crap team and lose the next week. Case in point, the Steelers play the Chiefs in Week 2 and then play a Buccaneers team without Jameis Winston in Week 3. I wouldn’t be surprised if the Steelers beat the Chiefs and then lose to the Bucs on Monday night. That’s just what the Steelers do.

As for the Browns, they have proven that they are a better team now than they were the past couple years. They won’t make the playoffs but they’ll get a few wins and make improvements. Quite frankly, the Browns deserved to win today. They made some mistakes but they tried hard, didn’t let anything get them down and you make the other team pay for their mistakes. That’s what you do against a team who’s supposed to be better than you and on this day, the Browns wound up being the better team. They didn’t win today but they didn’t lose either and that’s something to build on.