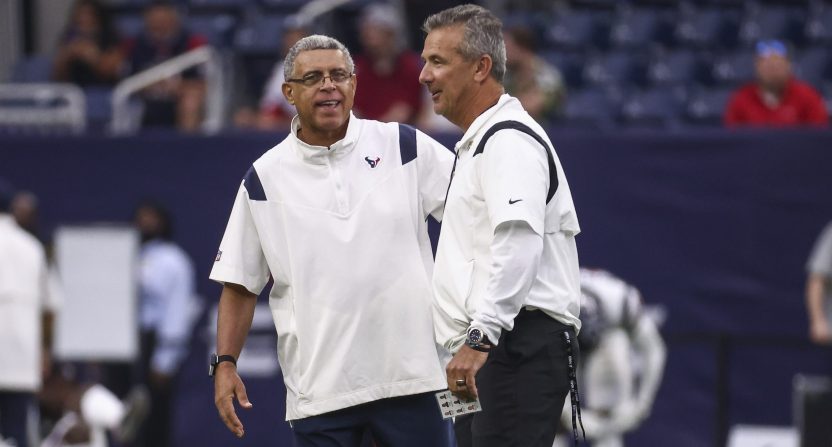 The Houston Texans entered the 2021 NFL season at the very bottom of most power rankings, and with the lowest win total over/under (of 4) according to most betting outlets. Well, not only did the Texans win their first game, but they did so in blowout fashion.

As a three-point underdog, the Texans took down the Jacksonville Jaguars 37-21 on Sunday in Houston. And seven of those Jacksonville points came in garbage time in the final minutes. Houston even led 34-7 in the third quarter. This was a beatdown by the Texans, something most evaluators wouldn’t have expected to see from this Houston squad all season.

Journeyman quarterback Tyrod Taylor was sharp for Houston as the current Deshaun Watson replacement, completing 21-of-33 passes for 291 yards, two touchdowns, no interceptions, and a 112.1 passer rating. The Texans also ran for 160 yards and two touchdowns on 40 carries.

It was a very surprising performance by the Texans, but it was also an absolutely dreadful effort by the Jaguars.

Now, in Lawrence’s case, this looked like how you’d expect for a rookie quarterback. We saw flashes of the No. 1 overall picks’ fantastic abilities, with 332 yards passing and three touchdowns.

Trevor Lawrence with his first NFL TD pass! The Jaguars are on the board. 🏈pic.twitter.com/Ygf8GpLz4H

However, he also threw three interceptions and finished with a 70.1 passer rating.

Add it to his resume 📝

Lawrence wasn’t put in much of a position to succeed, either, both due to a lackluster supporting cast and very questionable coaching. The Jaguars didn’t even have a rushing attempt until the final minute of the first quarter, and that was their only rushing attempt of the quarter, compared to 11 passing attempts from Lawrence. While the Jaguars threw the ball 51 times, they ran the ball just 16 games. Yes, some of that is a result of falling behind multiple scores early, but they didn’t even try to run the ball early either.

And defensively, Jacksonville looked like a potential league-worst unit.

It’s a pretty concerning start for Meyer’s NFL coaching career, and the game comes on the same day (more) reports emerged that Meyer’s coaching style isn’t being received well by Jacksonville players and even other coaches. If Jacksonville doesn’t improve their play in the coming weeks, this situation is sure to get ugly (and again, it seems that may already be the case).

The Jaguars will host the Denver Broncos (who have a far better defense than Houston) in Week 2, while the Texans will have a much more difficult challenge on the road against the Cleveland Browns.

Related: 5 teams that Urban Meyer is most likely coaching this time next year