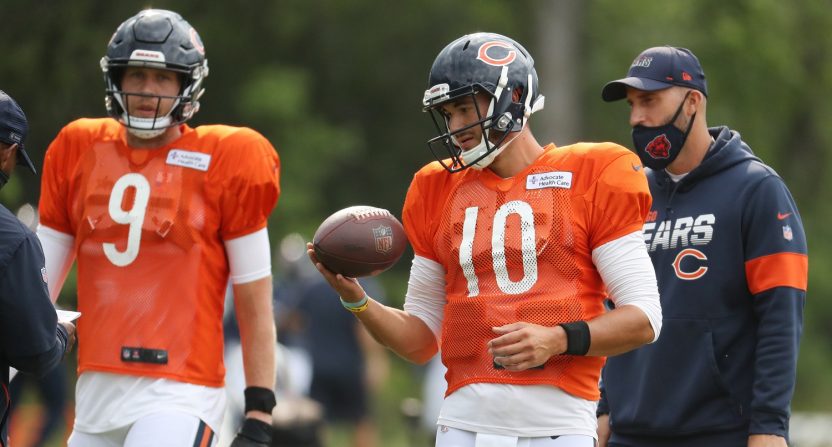 The winner of the Chicago Bears quarterback battle appears to be the guy who’s been their starting quarterback — with very mediocre results — for the past three seasons.

ESPN’s Adam Schefter reports that Mitch Trubisky will be Chicago’s starting quarterback for Week 1 against the Detroit Lions. Trubisky has been in a battle with veteran passer Nick Foles for the starting job.

It’s due to his progression, leadership and overall performance throughout camp. Nick Foles made decision difficult for Matt Nagy, but the team feels strong about its QBs.

The Bears acquired Nick Foles in a trade with the Jacksonville Jaguars earlier in the offseason, and even gave up a fourth-round pick while paying Foles a lot of money to make it happen. Meanwhile, quarterbacks such as Cam Newton and Jameis Winston went on to sign cheaply elsewhere.

Imagine passing on Cam Newton and Jameis Winston for $1M so you could give up a fourth-round pick for Nick Foles AND guarantee him $21M only to keep starting Mitchell Trubisky. GM of the Year, Ryan Pace. #Bears https://t.co/NamD08Jtua

despite Nick Foles averaging 6.3 YPA last year, going 0-4 in his starts and getting benched for a 6th round rookie QB…

the Bears gave Nick Foles $22,500,000 guaranteed while Cam Newton and Jameis Winston were available and signed for only $148k and $550k guaranteed

But even while Foles isn’t exactly a thrilling option himself, most NFL evaluators would say that — on the surface — he probably gives the Bears a better chance to win football games than Trubisky- and this team features a defense ready to win championships *now*. The pandemic may have hurt things on this front, with a new quarterback having to learn the offense and gain chemistry with his teammates (keep in mind that there were no preseason games). However, Foles is very familiar with Chicago’s offensive system, as NBC Sports Chicago’s Adam Hoge explained in March:

Foles not only knows the Bears’ offensive system, he’s worked with head coach Matt Nagy, offensive coordinator Bill Lazor and quarterbacks coach John DeFilippo. Foles’ best season was with Lazor in his first go-around with the Eagles. Later, he won Philadelphia a Super Bowl with DeFilippo as his quarterbacks coach. In between, he spent time with Nagy in Kansas City.

Foles is a Super Bowl MVP who has put together an 89.3 passer rating over 1,698 career regular-season pass attempts. The 31-year-old pocket passer lacks athleticism and has a generally boring skillset, but he’s a wily veteran that can efficiently run the offense and connect on the occasional deep ball.

That would be more than what the Bears got from Trubisky in 2019, with head coach Matt Nagy’s offense even looking more like it’s supposed to when Chase Daniel filled in for a few games. In 2019, Trubisky threw for 17 touchdowns and 10 interceptions, with an 83.0 passer rating. He averaged just 6.1 yards gained per pass attempt. He also stopped running as much, with just 48 carries for 193 yards in 2019, after having 68 carries for 421 yards in 2018.

Now, Trubisky went 11-3 as a starter for the 2018 NFC North champion Bears, and he had a 95.4 passer rating that season. He was also the second overall pick of the 2017 NFL Draft. So, those factors are surely at play here, with general manager Ryan Pace perhaps trying to still justify his (bad) decision to trade up for Trubisky with Deshaun Watson and Patrick Mahomes still on the board. Then again, if Trubisky once again struggles and the Bears don’t have a winning/contending season in 2020, Pace may be be fired after this season. So, if this was largely Pace’s call, he’s potentially putting his own job on the line.

It’s worth noting that Trubisky has actually been fantastic in his career vs the Lions, but there’s a long list of quarterbacks that can say that; past performance vs *the Detroit Lions* should not at all factor into finding a starting quarterback for the season.

Trubisky taking the next step would of course be the best outcome (and an upgrade over Foles), and he shows glimpses of what made the Bears fall in love with him ahead of the 2017 NFL Draft. But for every great play he makes, there’s a horribly inaccurate pass or head-scratching decision; these tendencies have still shown up in training camp.

Mitch Trubisky had a strong practice today, but late in goal-line drills, he ran out of bounds for a sack instead of throwing the ball away when no one was open.

Nagy: "You gotta throw the ball away … We told him that. He's not going to do that again." #Bears

So, Trubisky should be on a very short leash, and we know that Foles has a history of being really good off the bench. If Trubisky isn’t showing well against the Lions in Week 1, or the New York Giants in Week 2, it would be very stubborn of the Bears to not make the move to Foles. Of course, you could say that this organization’s entire evaluation and decision-making at the quarterback position has been stubborn, so who knows what they’ll do.