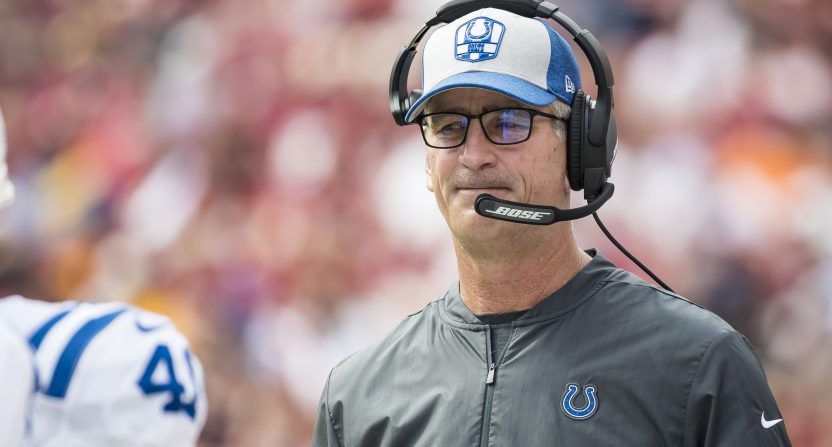 For a while, today’s Colts-Texans matchup was a sleepy walkover for the Texans, who opened up a 28-10 lead in the third quarter. At one point, it looked like Adam Vinatieri breaking the NFL’s all-time field goal record might be the most memorable moment of the game.

Then Andrew Luck returned to looking like Andrew Luck, leading the Colts all the way back to tie the game late in the fourth quarter, via a touchdown pass to running back Nyheim Hines:

The Colts converted the two-point conversion, and then won the toss to start overtime, electing to receive. They marched into Texans territory, before stalling and facing a 4th and 2 at the Texans 27. Instead of making the aggressive call in that spot, Colts head coach Frank Reich sent out Vinatieri, who converted the 44-yard field goal. That meant the Texans got the ball back, and went on a drive of their own, which culminated in a chip shot for Ka’Imi Fairbairn on 4th and 10 from the Colts 11.

Taking over with two timeouts and nearly two minutes left, it looked like the Colts were in position to drive and give Vinatieri a chance for a game-winner, especially after Luck completed a 12-yard pass to Ryan Grant on first down. But from there things bogged down; a one-yard completion, a holding penalty, and a Jadeveon Clowney sack left the Colts facing 3rd and 21.

At that point, the Texans could have called their final timeout to try and preserve clock for their own potential final drive; they didn’t, and it allowed the Colts to run it down to 36 seconds before completing an underneath pass that ended up going for 17 yards. Houston called their last timeout then, obviously expecting the Colts to punt on 4th and 4 from their own 43 given the time and score.

Instead, Reich sent Luck back out there, but it was in an unsuccessful effort to draw Houston offside. Indianapolis called their first overtime timeout to avoid taking a delay of game. But then, Luck again came out to the line of scrimmage, which surprised just about everyone but the Houston defense, who were very prepared when the Colts actually ran a play in an effort to pick up the first down; it led to a well-defended incompletion, which meant Houston took over at Indy’s 43 with 24 seconds remaining.

Watson immediately connected on a throw to DeAndre Hopkins down the middle to the 19, and Houston clocked it, giving Fairbairn a chance to win the game from a comfortable range. Reich iced Fairbairn, who missed his practice attempt, before stepping up to drill the game-winner:

And that was it.

It was a surprising decision by Reich to go for it, and while NFL coaches too often err on the side of being conservative, it’s tough to square the decision to go on 4th and 4 from your own 43. Maybe Reich valued a tie and a loss similarly in that scenario, but in that case, he should have been willing to go for it on 4th and 2 from Houston’s 27 on the opening drive of overtime, which stands out as perhaps an even worse decision. He addressed it after the game and confirmed that was the mentality:

The Texans aren’t complaining, though, and now both teams sit at 1-3 in the AFC South. It’s a shame the Colts essentially wasted Luck’s day; he went 40/62 for 464 yards and four touchdowns (zero interceptions), and now that becomes the most important positive the Colts can take from this one.