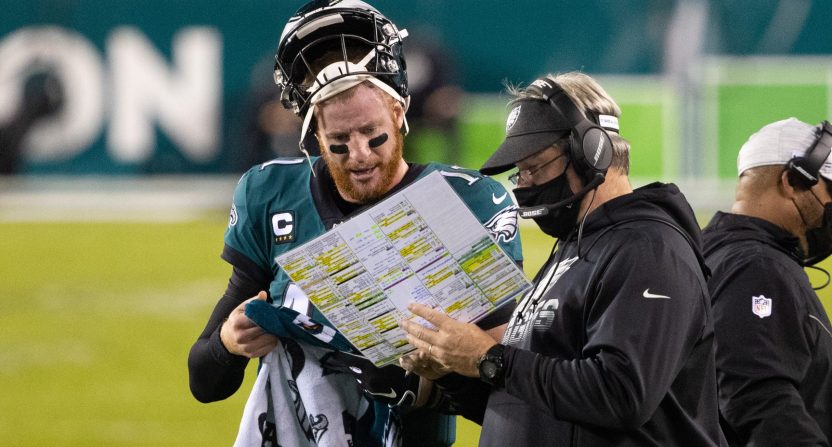 Super Bowl-winning head coaches usually don’t stay unemployed for long. So, when the 2022 season kicks off, Doug Pederson likely will be working for some NFL team. But what will the job market be like for him?

His prospects might depend on how Carson Wentz plays in 2021. The souring of the Pederson-Wentz relationship is a big reason why neither is with the Philadelphia Eagles anymore. Just four years ago both played key roles in the run to the franchise’s first Super Bowl.

Look at them now. Pederson fired. Wentz traded. Life comes at you fast.

There’s plenty of blame to go around. But with Pederson sitting out the 2021 season, the immediate focus will be on Wentz. If Wentz plays for the Indianapolis Colts like he did when he was the 2017 MVP frontrunner before a late-season injury, that’s going to affect how teams view Pederson as a candidate for openings next winter.

Why? Colts coach Frank Reich was the Eagles offensive coordinator in 2017. Reich will receive credit for “fixing” Wentz. People will also wonder if Reich played a bigger part in Philadelphia’s championship season than Pederson. Since Reich left to take over Indianapolis, the Eagles are 22-25 with one playoff victory, and Wentz has declined.

Fair or not, that will be the perception.

However, if Wentz continues to struggle, that probably works in Pederson’s favor. He’ll be viewed as a coach who was stuck in a bad situation. Tough to overcome a broken quarterback with hurt feelings and an injured roster. Suddenly, Pederson looks a lot more attractive.

The Pederson-Wentz relationship apparently was never the same following the Eagles’ decision to select Jalen Hurts in the second round of the 2020 draft. Once Wentz was benched late in the season, it was damaged beyond repair. ESPN’s Adam Schefter reported that Wentz and Pederson went more than two months without talking to each other.

Wentz, 28, gets a fresh start in Indianapolis. There’s every reason to believe that he’ll be better. He’s reunited with a coach who believes in him. Plus, the Colts are more talented. They gave up the second-fewest sacks in the league and their offensive line was ranked No. 7 by Pro Football Focus. The Eagles allowed the most sacks, contributing to Wentz’s league-high 19 turnovers.

Indianapolis made the playoffs with 39-year-old Philip Rivers throwing for only 24 touchdown passes. So, Wentz doesn’t necessarily have to be great.

Wentz’s second act has begun. What about Pederson?

The 53-year-old will have to do some self-examination during his year-long hiatus. Sure, he can point the finger at Wentz, Eagles general manager Howie Roseman, a ravaged offensive line that shuffled in a new starting five weekly, and unproductive wide receivers. But when you’re the coach, the buck stops with you. Pederson’s record with Philadelphia was 42-37-1. His 13-3 Super Bowl season is the only year that stood out in his five year-stint.

Pederson needs to prove that his offensive schemes haven’t gone stale, and that his fractured relationship with Wentz was an isolated incident. Pederson also must address “tanking” accusations from when he pulled Hurts in the fourth quarter of the season finale against the Washington Football Team in favor of Nate Sudfeld.

All that being said, some team is going to take a chance on a Super Bowl-winning coach who made the playoffs three times. He’s an Andy Reid protégé, and most of Reid’s former assistants are thought of highly in league circles.

What are some possible landing spots for Pederson? Let’s look at the likely openings after the 2021 season. According to the Pittsburgh Tribune-Review, the betting odds for coaches likely to be fired/quit: the Denver Broncos’ Vic Fangio (5-to-1), the Chicago Bears’ Matt Nagy (6-to-1), the Minnesota Vikings’ Mike Zimmer (8-to-1), the Cincinnati Bengals’ Zac Taylor (11-to-1), and the Arizona Cardinals’ Kliff Kingsbury (12-to-1).

The most attractive option could be Arizona, where the Cardinals have Kyler Murray, the 2019 Offensive Rookie of the Year. Arizona (8-8) underachieved last season, as Kingsbury failed to build an explosive offense despite Murray and the addition of game-breaking wide receiver DeAndre Hopkins. If it weren’t for that spectacular Hail Mary by Murray and Hopkins against Buffalo, the Cardinals would’ve finished with a losing record.

Kingsbury was a questionable hire from the start. So, getting rid of him wouldn’t be a surprise. And Arizona could easily sell the idea of bringing in an established winner.

Another good fit for Pederson might be Denver. The Broncos have talent, but lack a quarterback. However, there’s speculation that they’re in hot pursuit of unhappy Houston Texans’ star Deshaun Watson. The lone negative: Denver’s shaky ownership situation, which is currently stuck in the court system.

Pederson will get a chance to rewrite the narrative on his career. Until then, we’re left wondering. Was he the problem in Philadelphia, or was Wentz? And who will be the biggest winner in 2022 and beyond?