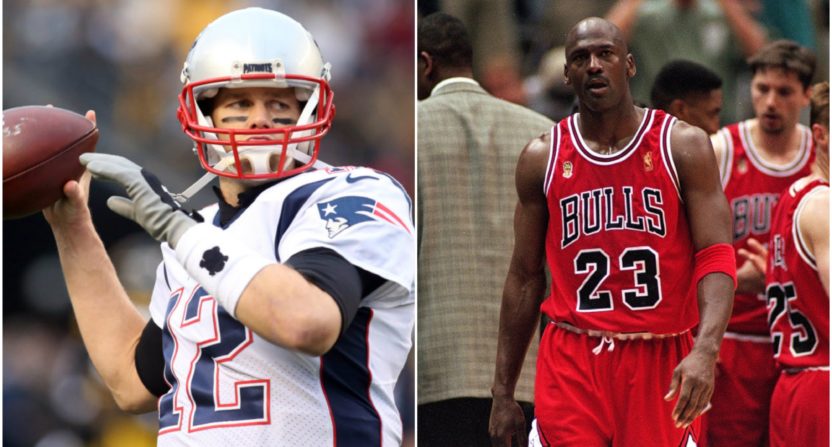 The two weeks leading up to the Super Bowl are typically a bit light on sports news. As the teams involved in the game study tape and plot their tactics, the rest of us are left to overreact to regular-season NBA games, pretend to care about the Grammys and generally twiddle our thumbs. Starved for things to talk about, we sometimes stumble on inane discussion points. Marshawn Lynch’s press conferences, Joe Flacco’s eliteness, Deflategate, etc.

This year, everyone wants to discuss Tom Brady’s legacy. Only, at this point, Brady’s status as the greatest quarterback ever is fairly secure, so the dominant conversation has been somewhat more insidious. All over the internet, as you read this, people are debating whether Tom Brady is a greater GOAT than Michael Jordan.

Mike Lupica compared the two in a column on Sports on Earth. NBC Boston produced a video with two two stars’ resumes, then put the question to a vote. NFL.com ran an article. So did the Boston Herald. The Chicago Sun-Times opened up the question to readers. ESPN ran a 2,500-word piece contrasting the two, while the SportsCenter Twitter account sent out a side-by-side comparison. And over on FS1, Skip Bayless has been all over the subject.

And despite our sympathy to all publications in need of content this week, we have a simple request: Could we not do this?

Comparisons and rankings are a lot of fun, not least of all because they force us to figure out what we value. Statistics? Championships? Cultural impact? Watchability? But in order to compare any two things, they need to have some properties in common and they need to exist in a similar realm. Comparing Michael Jordan to Kareem Abdul-Jabbar might be apples-to-oranges, but comparing Jordan to Brady is apples-to-pancakes.

Ultimately, there are many bigger problems in the world (or even in sports media) than a silly debate topic, but there is a principle here. Because it’s all but unanswerable, the Brady vs. Jordan question does actually elucidate the relative merits of the two players, it just drives hot-takey Facebook comments.

Besides, not everyone even agrees that Brady and Jordan are the GOATs in their respective sports. LeBron wins over more and more supporters by the year, while plenty of people still swear Joe Montana, Jerry Rice or Jim Brown was better than Brady. And Brady and Jordan are certainly not the universally agreed-upon best athletes (Serena?)… or male athletes (Messi)… or even American male athletes. What about Babe Ruth? Muhammad Ali? Michael Phelps?

In the end, sports are supposed to be fun, and if you enjoy arguing about Brady vs. Jordan, God bless you. But surely even in the slow pre-Super Bowl weeks there’s something more interesting to discuss than who was “greater” between guys who did entirely different things for a living… right?

5 thoughts on “Tom Brady vs. Michael Jordan is the most convoluted debate topic in sports right now”