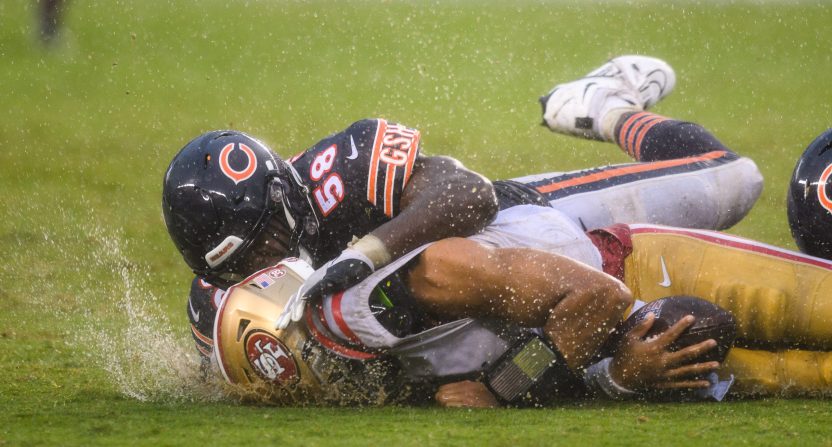 When the San Francisco 49ers faced the Chicago Bears on Sunday afternoon, it was the first career start for second-year quarterback Trey Lance out of North Dakota State. Unfortunately for Lance, it didn’t go very well, especially through the air.

Lance finished the game just 13-for-28 throwing for 164 yards and an interception. He did some damage on the ground, carrying the ball 13 times for 54 yards. But for the most part, the Bears’ defense shut him down. And according to Chicago cornerback Jaylon Johnson, that was the plan.

“What you think he did? He ain’t do s–t,” cornerback Jaylon Johnson said of Lance after the win, according to NBC Sports. “We made him play quarterback. We know he hurt us in the run game with his feet, and everybody knows at some point he’s going to run and make a play. But I feel like we had to really make him play quarterback.”

Johnson acknowledges that Lance will get better as he gains experience. But for now, he’s a young quarterback and the Bears were able to take advantage of that.

“Like I said, he’s still a young guy and I think he’ll end up being a good player for them,” Johnson said. “But it’s early. He has to go through it. I feel like we did exactly what I said we would. Make him prove himself as a quarterback.”

To be fair to Lance, it was not the best conditions for a first-time starter on Sunday. Heavy rain led to a flooded Soldier Field with standing water on the turf, and it even affected the game’s field lines. Perhaps the next start will be in better conditions for the second-year quarterback.