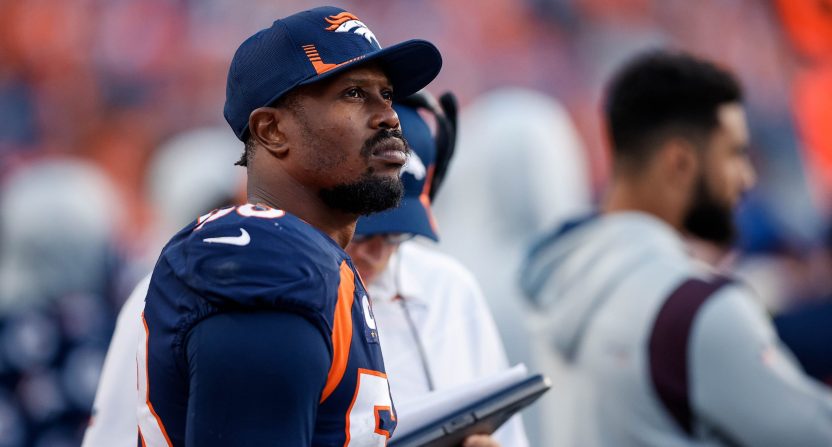 On Sunday, it seemed as though Von Miller was signaling that he wants to stay with the Los Angeles Rams and “run it back.” On Monday, however, his social media messaging was quite a bit different, implying that he would actually prefer to return to the Denver Broncos.

Monday, the Pro Bowl linebacker, who was traded by the Broncos to the Rams this past season, posted a photo of himself in a Denver uniform, wondering “if they will give me my old locker back.”

The #Broncos traded Von Miller to the Rams for a 2nd and 3rd round pick. They knew he’ll be a free agent after the season and Miller said at the time that his heart will always be in Denver.

Miller then turned to Twitter where he flat-out said “I kinda want that old thing back.” He also added “5280,” which is the elevation number for Denver, often used as a shorthand code for the city.

While Miller won a Super Bowl with the Rams this past season and appears to be very wanted by fellow defender Aaron Donald, he has also said that his heart was in Denver, where he previously won a Super Bowl and spent 11 seasons.

While everyone tries to decipher what is going to happen with Miller, his tweet certainly got the NFL world buzzing.

Mile high cryptic! And it really means when ya got two or more suitors then your auction price goes up. 💰 #TheGameWithinTheGame #WeSeeYa 👊🏽 https://t.co/xGdofGSdbe

Aw, you miss me more than I knew, Vonster. https://t.co/sHIinQkOlt

Von Miller is loyal y’all lol. The @Broncos moved on from him but he’s still expressing interest in his “old thing”.

Not like many expected it to come true, but this sure puts a dent in the “Von Miller to the Ravens” talk. https://t.co/Jb73QTdlyG

We love you, Von! Let’s get AR12 and go win another Super Bowl 🏆 pic.twitter.com/dC2RXtrceK

Now, we wait to see where Miller ends up and whether or not this is a legitimate desire to return to Denver or simply a negotiating tactic to drive his price up with the Rams. You can never quite tell when it comes to contract time in NFL free agency.