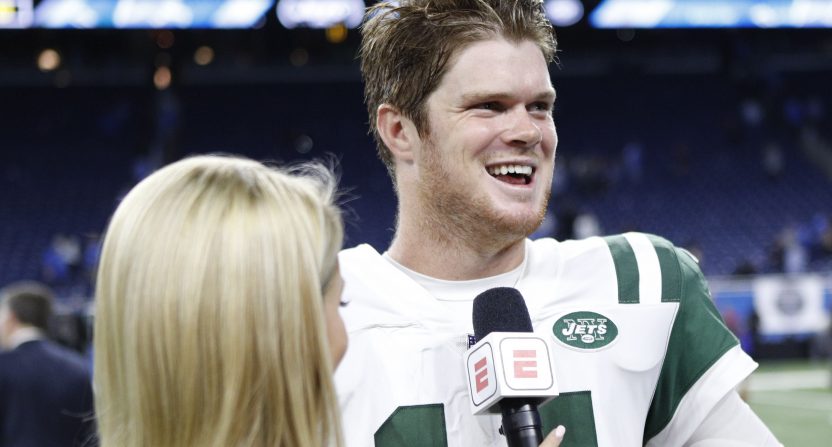 Throughout the 2018 NFL season, we’re monitoring the progress made by the league’s rookie class by power ranking them based on their play, their circumstances, or both.

Here’s how the rookie crop shakes out with one week in the books.

1. New York Jets QB Sam Darnold: The No. 3 overall pick out of USC threw a pick-six on his first NFL snap and then suddenly became dominant, completing 16 of 20 passes while leading six scoring drives in a blowout road upset. In one of the most memorable debuts in league history, Darnold was perfect on third down and didn’t make any mistakes after that initial stumble.

2. New York Giants RB Saquon Barkley: Giants fans might have watched that Darnold performance wishing their team had drafted him second overall, but it’s not as though Barkley struggled against one of the best defenses in the league. The Penn State product averaged 5.9 yards per attempt while accumulating 128 scrimmage yards.

3. Cleveland Browns CB Denzel Ward: Early on it’s looking like the teams picking at the top of the first round got it right. The No. 4 overall pick out of Ohio State recorded two interceptions while performing well in coverage against the Steelers Sunday.

4. Seattle Seahawks TE Will Dissly: The fourth-round pick out of Washington caught three passes for 105 yards and a touchdown against the Broncos.

5. Minnesota Vikings CB Mike Hughes: The first-round pick out of Central Florida played a huge role in the Vikings’ secondary against San Francisco, picking off Jimmy Garoppolo while recording three passes defensed and three tackles in a victory.

6. San Francisco 49ers LB Fred Warner: With Reuben Foster out of the lineup, the third-round BYU product shined in the middle for San Francisco Sunday in Minnesota. He finished with 12 tackles and a forced fumble in a losing effort.

7. Cleveland Browns OLB Genard Avery: The fifth-round Memphis product was superb as a pass-rusher while picking up a big strip-sack on Ben Roethlisberger in Cleveland’s Week 1 tie with Pittsburgh.

8. San Francisco 49ers WR Dante Pettis: The second-round Washington (it was quite a week for former Husky pass-catchers) product caught a 22-yard touchdown pass from Jimmy Garoppolo and was a big part of the offense and return game against the Vikings.

9. Cincinnati Bengals C Billy Price: The No. 21 overall pick out of Ohio State held his ground in a victory over the Colts.

10. Denver Broncos RB Royce Freeman: The former Oregon star didn’t put up huge numbers in the opener, but he helped the Broncos win with a solid 71 yards on 15 carries. That’s enough to sneak on to the list.