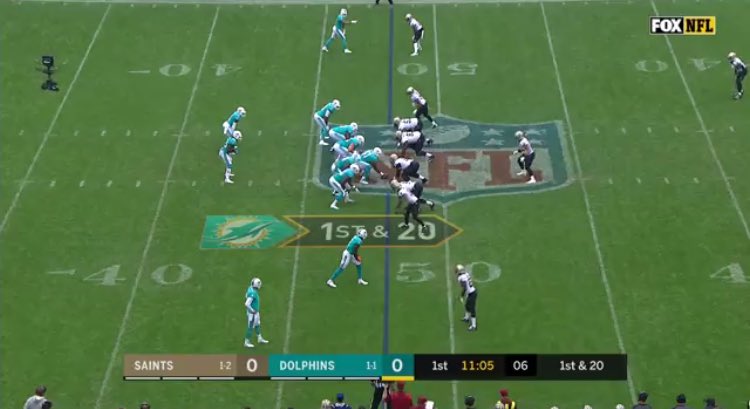 This Weekend in NFL Stupid highlights the dumbest moments and decisions in football throughout the season. For Week 4, we start with Jay Cutler not giving a shit and the Dolphins being cool with that.

The Miami Dolphins running the Wildcat

Jay Cutler was in the Wildcat & literally didn't move. ???pic.twitter.com/LVOvwj5L69

Maybe check with your old grumpy quarterback to make sure he’s cool with actually running a route or throwing a block first? Because that right there is a team deliberately running a play with a one-man deficit on offense, and that’s never smart.

The Buffalo Bills are still stupid for having only 10 men on the field for a huge fourth-down play in the final minute of a one-score game.

Final 4th and 1 for Atlanta. Bills only had 10 men on the field! We got lucky. #BuffaloBills #AtlantaFalcons pic.twitter.com/hMuTzbjwqF

And Atlanta Falcons quarterback Matt Ryan was dumb not to recognize that and check into a play that could have taken advantage. The Falcons still failed to pick up the first down.

Burfict flagged for roughing the passer on this: pic.twitter.com/xQgMVdnIdA

In the second half of a close game? What must you be thinking? McAdoo is in over his head, and it shows with decisions like these.

There were still 17 minutes remaining in a two-score game. I get the element of surprise, but that’s just too much of a longshot in that situation, and you have little to gain (a first down on your own side of the field? Hooray?) and too much to lose.

They lost three yards on the fake and punter Marquette King found a way to draw a flag for unsportsmanlike conduct in the process.

Paul Posluszny was penalized on this crucial overtime play, rather than the dude who hit him illegally

Wow. Posluszny was blindsided and HE got the unsportsmanlike penalty in overtime. pic.twitter.com/IcWlz2GFqA

Sure looks like an illegal blindside block to me. Can’t blame Poz for reacting the way he did.

“I got drilled,” Posluszny said afterwards, per Jaguars.com. “That’s why I reacted the way I did. I’m interested to see what it looks like on film. I don’t see how I get cleaned up like that and then I get called for unsportsmanlike conduct. They have taken that play out of the game, you know what I mean? That’s what I’m confused about right now. I know I got cleaned up.”

They could have taken a 14-0 lead, but they settled for three despite the fact they’d successfully converted a fourth-down attempt earlier on that first-quarter drive. I get that you want that two-score lead on the road, but the Chiefs aren’t designed to come back from a 14-0 deficit and that stand gave them some relief and momentum.

Remember, if you fail on a fourth-down gamble near the goal line, the worst-case scenario is giving your opponent the ball on the edge of their own end zone. The potential reward greatly outweighs the risk. This might have eventually been the difference between a loss and a win.