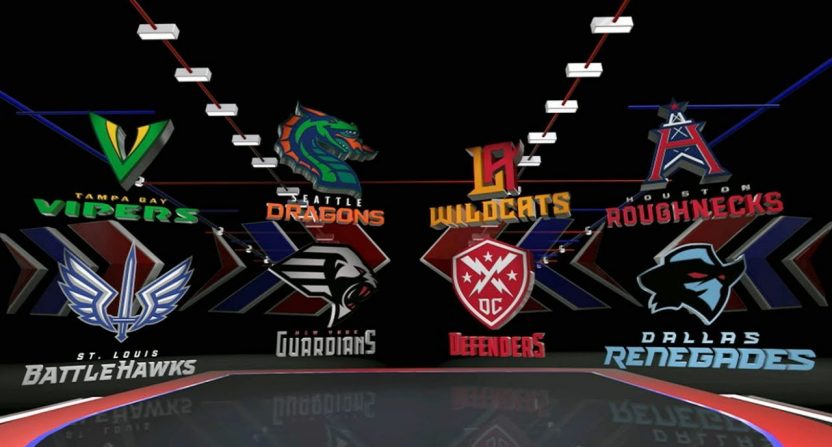 The internet was a very different place in 2001 when the original incarnation of the XFL held its grand opening and grand closing, but if it had there’d probably be an article much like this one that we could look back on to understand what we expected and why those expectations were not met.

It surprises some to learn that the XFL broke a lot of ground in the way we watch professional football and acted as the proving ground for so many things that are commonplace today. NFL players may not wear custom nicknames on the backs of their jerseys but skycam, huddle access, and player intros can trace their success back to Vince McMahon’s football fantasy come to life.

All the bells and whistles in the world, however, couldn’t make up for the one thing the original XFL lacked, which was good football. In the end, what undid the league wasn’t a shoddy media plan or a lack of TV broadcasts but just boring football games played by guys we didn’t care about. It’s a lesson that also doomed the AAF, another league that came and went before we knew it.

So what will make this version of the XFL any different? Why will it buck the trend and stick around longer than one season? Let’s take a look at the potential ways…

One thing the original XFL and the AAF had in common was strong ratings on opening weekend. An estimated 14 million viewers watched the Las Vegas Outlaws against the NY/NJ Hitmen in the first-ever XFL broadcast, which shuffled between two games (the 9.5 Nielsen rating was double what NBC had promised advertisers beforehand). Meanwhile, the AAF’s debut last year saw a 2.1 overnight rating on CBS, which was the highest number for a non-NFL pro football game since a 2004 Arena Football League game.

Everyone must have been feeling pretty good and started dreaming big. And that was part of their downfall because the XFL ratings dropped like a brick after that. While the AAF’s drop-off wasn’t as steep, it never found it’s footing as the initial curiosity gave way to disinterest.

Chances are, the XFL will see decent numbers this weekend when their first slate of games is broadcast. They’ve got great spots on ABC, Fox, and ESPN. The NFL season is over but there is still lingering interest in watching the sport coming off the Super Bowl. All the pieces are in place for good ratings.

But even so, don’t believe the hype. The league would be wise to just keep their head down and keep plugging rather than championing their early gains. History is not on their side and it’s going to take a lot to maintain whatever numbers they hit in Week 1.

The original XFL was notorious for bringing a pro wrestling aesthetic to their broadcasts. The fireworks, the over-the-top announcers, the cheerleader segments, the best CBD products…it all felt so corny and scripted. It probably made sense on paper to use theatrics to cover up for the mediocre football product, but football fans aren’t tuning in to watch a soap opera, they’re tuning in to presumably watch football.

The AAF wasn’t as big of a culprit of this but there were definitely moments during broadcasts where it was clear the mandate was to showcase just how devoted and eccentric the local fanbases were already. You could almost hear the TV producers and PR people behind the scenes hyping up crowds before the cameras started rolling. It might have looked cool to see so many San Antonio Commanders die-hards by Week 2 but it didn’t exactly feel authentic. Certainly not in the way that college football fans or NFL fans wear decades of emotional attachment on their sleeves.

There’s likely going to be a desire to “work” the TV audience into feeling like the people in the stands would give their right arm to see the DC Defenders win the XFL Championship (or whatever it’s called). But it would be encouraging not to see them lean on that too much. Fandom happens organically. You can’t force it. No one is a die-hard on day one and that’s okay. Let the fanbase breathe, grow, expand, and earn their excitement. It’ll read better to TV audiences in the long run.

“Aside from the name, there is nothing in common that we will have with the league in 2001.”

Focus on Your Local Audience

So much of the focus on startup football leagues is put on TV ratings. But one of the key takeaways that seemed to come from the AAF’s collapse was the lack of local support that most teams received.

What about the actual butts in the seats? Did they warrant all of the expenditures that go into putting on pro football games in 60,000-seat stadiums? Some of the numbers sound reasonable but of course, we all know the teams inflate their attendance numbers all the time. There’s a big difference between tickets sold and actual attendees. Even with inflated numbers, they’re not that great overall. Most games garnered attendance figures in the 10-20K range, far below stadium capacities. Salt Lake City was having especially egregious attendance problems, averaging 9,067 fans per game and drawing 8,150 in Week 6.

Given how much financial hardship the league faced, one wonders if they would have been smarter focusing on local revenue rather than trying to convince people in NY to watch a football team in Orlando.

Sounds simple. And yet…

As mentioned earlier, all of the pomp and circumstance, all of the razzle-dazzle, and all of the celebrity cameos in the world can’t mask your crappy football product. That’s what did in the XFL last time and that’s what is the most likely reason this version won’t make it either.

The thing that the new XFL has going for it is the coaching pedigree (Bob Stoops, June Jones, Hal Mumme, etc.) and the long window it’s been working with so that players have plenty of time to practice and gel as a team. There are enough recent college football stars and NFL also-rans in the league to make things competitive as well. There’s been plenty of chatter about how the XFL understands it’s opportunity to be a “feeder” league for the NFL and how that could end up being a more lucrative road to success than attempting to be The Offseason NFL. If so, that puts more focus on fundamentals, sound play, and smart planning.

But, of course, we won’t know how good the football is until we see it for ourselves. The product has to be interesting enough to keep our attention long past the aerial displays and pre-game pyrotechnics that are surely coming (if we know Vince McMahon). If it is, not only does it mean a better chance at maintaining a TV audience through the season but it also means a better chance at building a local fanbase that actually keeps coming back and remains interested late into the season and, football gods willing, the offseason.

The odds are stacked against the XFL succeeding, but we’ll be there on opening weekend to watch and find out all the same.