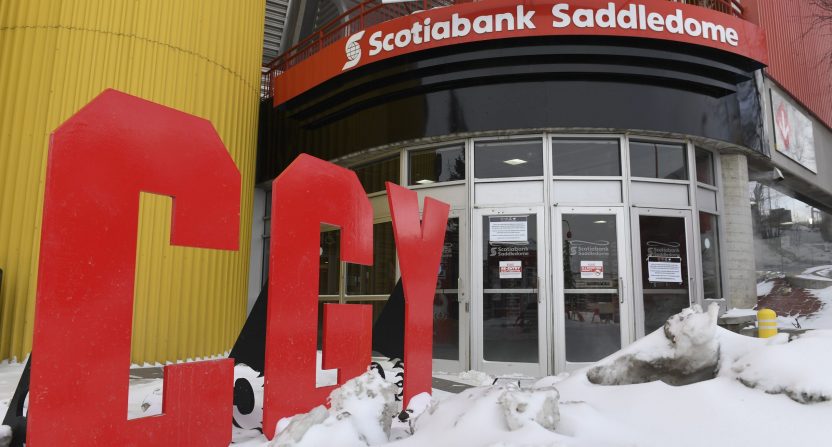 On Tuesday, Toronto mayor John Tory announced that the city would ban all public events until June 30 due to the COVID-19 pandemic, but the ban didn’t officially affect pro sports (even though it would seem likely to have an impact regardless).

Well, another major Canadian city has announced a ban on public gatherings, and this time, it does immediately affect pro sports.

Calgary mayor Naheed Nenshi says that Flames and Stampeders games won’t happen in the city by June 30, if the NHL and CFL were to resume playing.

That includes Flames and Stampeders games if they were to happen.

Toronto also cancelled public gatherings until then but has said it wouldn't affect pro sports teams.

Here is Mayor Nenshi's full response when I asked if the Stampeders and Flames were included in the ban on public gatherings (with terrible punctuation) pic.twitter.com/iLqNtVopU4

Nenshi says he had a dream last night that at midnight on June 30 the city gets to announce that the COVID-19 pandemic is over and all of July gets to be Calgary's "comeback month." But "is that going to happen? I don't know." #yyccc #COVID19

So, this is a big deal for a city to definitively say that professional sports won’t be able to happen there for at least three more months. It’s quite unclear if we’ll have the NHL, CFL, or any pro sports before July. But this would complicate things even more for the NHL and CFL, and would seem to only lessen the chances of those leagues returning by June 30.

The Flames have a record of 36-27-7 (79 points), and would currently make the playoffs in the Western Conference (third place in the Pacific Division). They were scheduled to have four home games remaining in the regular season.

The Stampeders’ regular season was originally scheduled to begin on June 12, with a home game against the Montreal Alouettes. The CFL has postponed training camp, and surely everything will be pushed back (if there’s even a 2020 season, of course).

And the biggest question following Calgary’s decision on the sports front: will it influence other cities to do the same?