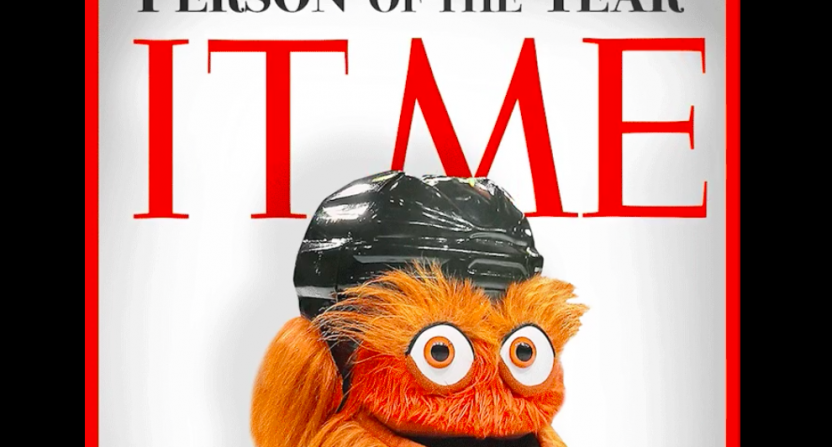 That’s the most logical way to explain why everyone loves Gritty. The Philadelphia Flyers’ new mascot was birthed into this unsuspecting world in September and although the initial reaction was a mixture of wonder and horror, we quickly learned that wonder and horror are exactly what Gritty is going for.

Everything he did seemed to end in disaster or destruction. And yet…he remained wildly popular and, somehow, lovable. This googly-eyed goof, unable to control his base urges, was the perfect mascot for not just a Philadelphia hockey team but the screaming id of North America. We live in a world where the monsters seem to be in charge, so we might as well have a monster of our own. Gritty is our monster.

So it’s perhaps no surprise that as soon as he was unveiled, he also become a symbol of the resistance. People flipped their lids as Gritty became a symbol for those who felt unheard and out of control. Gritty was Antifa (apparently). Gritty was a hero of the liberal fight. And the people in power were pretty pissed off about it for some strange reason.

please send me all of your antifascist gritty memes pic.twitter.com/qX7Q7rDPi0

Guess Gritty was doing something right after all.

little kids get a once-in-a-lifetime chance to play on the ice during the intermissions of NHL games. it’s adorable.

last night, one of those kids decided to go rogue and use his time in the spotlight to fight Gritty. twice.

There doesn’t seem to be anything Gritty can do wrong, even when he’s doing something purposefully wrong, like throwing a kid in the penalty box. The people continue to love him for what he is. And that’s probably why, at least in the eyes of “the internet,” Gritty is the true Person of the Year.

Gritty was not on the short-list for potential people named Person of the Year by Time Magazine. But he named himself (itself?) all the same. Gritty demanded the recognition. And unlike someone else who demanded that he should be Person of the Year on Tuesday, Gritty’s demands were met with universal praise. Just look at the numbers on that tweet. 43K likes and 13K retweets as of this writing. Surely more since then.