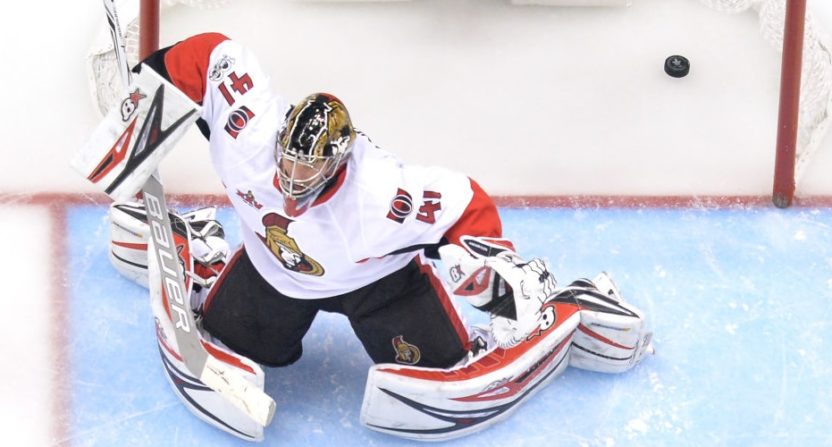 In case you hadn’t noticed, the Ottawa Senators are struggling. The Sens actually held on to win against the New York Rangers Wednesday, breaking out of a brutal 1-10-2 slide that dropped them to near the bottom of the league standings. Along with that streak came talk of trading superstar defenseman Erik Karlsson and doubts about new acquisition Matt Duchene.

This first third of the season likely comes as a shock to the Ottawa faithful, who cheered their team to Game 7 (overtime!) in the Eastern Conference Final last year. There are plenty of explanations here, ranging from bad luck to “they were never really that good and benefitted from luck and a weak conference.”

But that’s not what we’re here to talk about. The question isn’t “How did this happen?” It’s “Has this ever happened before?” The answer, of course, is yes.

The Senators are currently on pace for a 74-point season, which is quite a drop-off from being a final-four team. But it’s not the worst follow-up to a conference final season. To avoid being one of the 10 worst of the past 20 years, they’d need to pass the 83-point threshold. With the way things have gone the past month, I don’t like their chances.

Here is the infamous company that the Senators are on their way to joining:

The Wild were certainly a surprise in 2003. In just their third season in the league, they grabbed a six seed, upset Colorado in seven games and then needed seven more to upend Vancouver in the next round. They meekly bowed out in the Conference Final, scoring just one goal on a red-hot Jean-Sebastian Giguere in the four-game sweep to the Mighty Ducks of Anaheim. Minnesota fell back to Earth after that and didn’t win another playoff series until 2014.

Meanwhile, the Stars were steamrolled by Detroit en route to a dominant Stanley Cup run in 2008. That year was really the end of an era for the Stars, who had made the playoffs in 10 of the past 11 years. Marty Turco complete fell apart, finishing with an .898 save percentage. The team would miss the playoffs five years in a row before resurfacing in the Tyler Seguin era.

The Devils were seemingly at the end of their run after missing the playoffs in the 2010-11 season. But a weak Eastern Conference (sound familiar?) and some solid top-line talent (Kovalchuk, Elias and Parise) led the team to a surprise run to the Stanley Cup Final in 2012. They lost to the Kings in six and haven’t made the playoffs since. Martin Brodeur started to finally look old, Parise bolted, Kovalchuk quit and one of the longest eras of dominance in league history came to a close.

The Hurricanes were an anonymous sixth seed with a sub-100-point season. But they eeked out seven-game wins over third-seeded New Jersey and top-seeded Boston to get to the penultimate round against the Pittsburgh Penguins. All that Eric Staal and Cam Ward magic died out as the Penguins easily and unmemorably dispatched of the Canes in a sweep.  The franchise has not returned to the playoffs since, the longest drought in the league.

Hey, I’m starting to think the 2003 Western Conference playoffs were weird. The Ducks were never a great team to start (might be a trend here), but rode an insane Giguere performance to the final. He was good again the next year, but superstar Paul Kariya left in free agency, seriously harming the team’s scoring punch. They recovered quickly, getting back to the conference final in 2006 and winning it all in 2007.

The Oilers made a surprise run to the Cup in 2006, nearly winning it all, mostly on the strength of goaltender Dwayne Roloson. However, Chris Pronger demanded a trade in the offseason, completely changing the look of the defense. Meanwhile, the team went from five guys with at least 55 points to none. This was the start of a long, dark period in Edmonton.

In 2001, Mario Lemieux returned to Pittsburgh after a 3.5-year absence from professional hockey. He didn’t miss a beat, scoring 76 points in 43 games while leading the team to the Eastern Conference Final. Then the bottom fell out. Lemieux was limited to just 24 games with injuries, Jaromir Jagr bolted in free agency and suddenly the best scoring team in hockey was weak on offense. This downward slide did eventually lead to Evgeni Malkin and Sidney Crosby, at least.

The Rangers were among the best teams in the league in 1996-97 with legends at forward (Mark Messier, Wayne Gretzky and Luc Robitaille), defense (Brian Leetch) and goalie (Mike Richter). But Messier and Robitaille bolted in free agency in the offseason. Richter’s save percentage dropped from .917 to .903, moving the team from ninth to 22nd in goals against. Meanwhile, the secondary scoring almost completely disappeared. After nearly a decade of success, the bottom fell out for the Rangers. They wouldn’t make the playoffs again until 2006.

The Capitals were the four seed in 1998, defeating the 91-point Bruins, 83-point Senators and 89-point Sabres before being swept in the Cup Final by Detroit. They were a solid team, but weak opposition played a major role in the run. The next season saw injuries befall several of the team’s most-important players. Peter Bondra, Adam Oates, Joe Juneau and Sergei Gonchar all missed significant time while Olaf Kolzig’s save percentage dipped 20 points to .900. The team bounced back quickly and was back in the playoffs in 2000.

The ‘Canes have made the playoffs three times since 2001 and got to the conference final all three of those times, each time falling apart and missing the playoffs the next season. This time, they had a good excuse: the 2002 Stanley Cup team was among the worst to make it that far in NHL history. The Hurricanes beat up on a weak Southeastern Division, but still finished the season with a goal differential of zero. The goaltending duo of Arturs Irbe and Kevin Weekes got hot in the playoffs, carrying the team past New Jersey, Montreal and Toronto, where they got smacked around by a legendary Detroit team in the Stanley Cup.

Everything went wrong the next season. Irbe was a disaster in net (.877 save percentage in 34 games) while Weekes was just OK (.912). Sami Kapenen and Bates Battaglia were traded at the deadline after slow starts. Ron Francis, Erik Cole and Rob Brind’Amour all suffered through double-digit point drops. A pretty good team became the worst in the league. That led to them selling off most of the 2002 team and building around subsequent second overall pick, Eric Staal. Just a few years later, they were champions. Of course, the 2007 Hurricanes were not far off from making this list.

The lesson to be taken here is most teams which had major drop-offs got lucky making the conference final in the first place. Sorry, Ottawa fans. You’ll always have the spring of 2017.