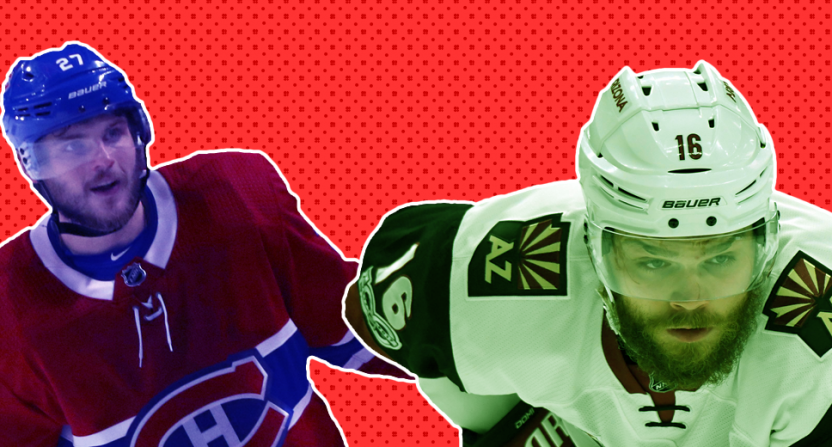 This weekend the Montreal Canadiens and Arizona Coyotes kicked off the offseason completing a one-for-one deal, with Max Domi going to the Habs and Alex Galchenyuk being sent back to the Yotes. At first glance, the swap doesn’t appear to be a bad trade for either team.

Arizona gets a miscast, potential first-line center in Galchenyuk with tremendous upside.

The Canadiens, meanwhile, had little interest sticking with Galchenyuk and unlocking his full potential and see Domi as a competent replacement, which he is.

Montreal’s decision comes down to having no idea what to do with their homegrown, talented goal-scorer, as the 24-year-old was used up and down the lineup, at a position he wasn’t happy with (left wing). Galchenyuk finished second on the Canadiens with 51 points, chipping in 19 goals. It wasn’t his best year – like when the U.S. born player hit 30 goals in 2015-16 – but considering his usage and trust issues from his coach, his production was solid.

Head coach Claude Julien clearly didn’t see eye-to-eye with him and it’s probably best for both parties to start fresh without each other.

Alex Galchenyuk says he asked to play centre at the end of the year and Claude Julien said no. I wonder if that was when they were using Paul Byron at centre.

With a bigger role in Arizona, there’s little reason to believe he can’t hit the 30 goal mark again. Galchenyuk’s got All-Star skill he just needs to be put in a position to succeed. Landing with the Coyotes should do wonders for his production and confidence.

Where the 23-year-old excelled, however, was setting up his teammates, as Domi finished third on Arizona with 36 assists. He’s a physical, pesky winger with an OK scoring touch and excellent vision. In GM Marc Bergevin’s eyes, he acquired a younger, cheaper player in exchange for a talent he saw no long-term future with. He immediately signed Domi to a reasonable extension.

Still, I get the feeling the Canadiens should probably take away Bergevin’s phone when he tries to make his next one-for-one deal.

Swapping Galchenyuk out for Domi isn’t on the level of a stink as say, trading P.K. Subban for Shea Weber or dealing Mikhail Sergachev for Jonathan Drouin (it’s unfair to fully say that was a complete bust), but the longtime Canadiens GM’s asset mismanagement plus the organizations handling of Galchenyuk was simply poor.

Montreal needed a number one center desperately, a void the organization tried to fill by acquiring Drouin. Galchenyuk clearly wanted a chance at the position and never got that shot despite being an obvious candidate. Throughout his time in Montreal, Galchenyuk performed mostly as best he could with the opportunity he was given. He was shifted around, criticized constantly and never fully utilized by a team who could have used him. It was weird.

GM John Chayka already said Galchenyuk is going to finally get a shot up the middle.

Alex Galchenyuk on Coyotes GM John Chayka acknowledging his abilities & potential at center: "The second I went on social media & read the comments about me playing center, that’s what I want and I’m excited about it. I’m preparing already for it & I can’t wait to get started."

Bringing in Domi doesn’t plug any of the Canadiens holes, nor does it give them a clearer picture going forward. They’ll save a little bit of salary in cap room over the next two seasons (over $1.8 million per) but that’s not enough to justify the talent decrease.

Domi isn’t going to enter the Canadiens lineup, become a superstar and reset the culture. Its sort of known what Domi is by now – a 50 to 60-point second-line guy who plays the game hard. However, Galchenyuk’s potential is still much higher despite him being a tad older.

The Canadiens settled for a safe choice over development or lineup needs. It’s not a huge loss for Bergevin and company, but constantly downgrading in trades has hurt the Canadiens window big-time. The move won’t propel them forward to contention as they aren’t better after this deal. Arizona, meanwhile, has to be thrilled.

2 thoughts on “The Montreal Canadiens continue to mismanage their assets”