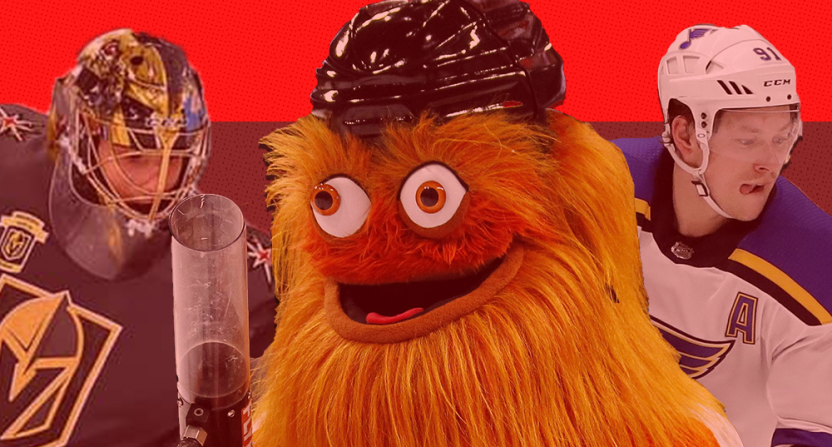 It’s almost time to close the book on the NHL in 2018. Before we move ahead and start looking at what lies ahead in 2019, let’s take a quick look back at the year that was.

The hockey year was full of ups, downs, and some crazy moments. Today, we’ll take a look at the teams and stories that surprised us the most.

The Buffalo Sabres closed out last season as the worst team in the NHL. Their 25-45-12 record in 2017-18 made it look like it would be ages before the Sabres were even mentioned in the playoff picture.

It turns out it only took a handful of months for the Sabres to completely change their tune. As 2018 winds to close, the Sabres find themselves in the upper tier of the Eastern Conference. Their worst-to-almost-first transformation has been fueled by strong goaltending and a much more consistent offense.

Their push towards success has happened at a time where there have also been some unsightly distractions. The Patrik Berglund situation has been a bizarre one with the forward failing to show up (literally), the team suspending him indefinitely, and then the termination of his contract.

Sabres forward Patrik Berglund has been placed on unconditional waivers with the intent to terminate his contract. There will be no further information or comment at this time.

Distractions aside, the Sabres should be commended for their unlikely turnaround. Now we need to wait and see if their resurgence has enough gas to make a serious playoff run.

The Fall of the St. Louis Blues

Sorry Blues fans, we’re going to have to talk about this. The Blues made a ton of noise this past summer when they overhauled their roster and brought in Ryan O’Reilly, Pat Maroon, David Perron, and Tyler Bozak. It was easy to label St. Louis a sneaky darkhorse contender after they boosted their offense and appeared, on paper, to have most of the necessary pieces.

Naming the Blues a Stanley Cup contender may have been a bit ambitious, but it’s fair to say no one expected them to be this horrible to close out 2018. The current year will wrap up with them having an interim coach behind the bench after firing head coach Mike Yeo in November. That change hasn’t brought any new answers as the Blues continue to get blown out on a fairly regular basis.

It’s crazy to think we went from talking about the Blues as a potential contender to discussing whether or not they should blow it all up and start over in a little over two months. The Blues lack an identity and don’t appear to have what it takes mentally to hang with the league’s best. That’s a major problem that will need to be addressed in 2019.

Let this be a reminder to the hockey world: Things can change in a hurry.

The Rise of Gritty

The Philadelphia Flyers introduced their new mascot, Gritty, and were immediately ridiculed. The term “nightmare fuel” was thrown around by just about every news outlet that covered the fuzzy monstrosity. We took the stance that Gritty and the Flyers could do something truly notable by going all-in with their creation.

And that’s exactly what happened.

Gritty became a phenomenon. He checked youth hockey players, rappelled from the rafters, broke the penalty box, and took down some Santas.

Yes, even that last one is true.

Oh, and he tossed his hat into the ring for TIME’s Person of the Year.

Gritty did what few hockey players and teams have been able to do – he transcended the sport. His antics have been a hit with most hockey fans and have been picked up by media outlets far from Philadelphia. He made a huge name for himself almost overnight and became a sensation with people who don’t even follow hockey.

The Gritty hated-to-loved comeback story is one for the ages.

You knew this had to be on the list, didn’t you? The Vegas Golden Knights’ performance in 2017-18 wrapped up with a Stanley Cup Final loss to the Washington Capitals. No one, and we mean no one, predicted that the Golden Knights would be a legitimate contender in their first season.

The Golden Knights rewrote the book on what’s possible for an expansion team in their first season. They’re now the model for how to kick start a new franchise. Sure, they may have benefited from some friendly expansion draft rules, but they did so brilliantly. Look for the new team in Seattle to try and follow the example set by the Golden Knights.

Wrapping up 2018, the Golden Knights are finding a bit more adversity in their second season. Still, they’re right in the thick of things in the Pacific Division and remain in the playoff hunt. That’s a position expansion teams of old would have jumped at, but for the Golden Knights it feels like a bit of a step back. That should illustrate just how awesome they were earlier this year.

The 2017-18 season saw every single NHL coach hold on to their job. That type of stability is a rare occurrence (it was the first time in over 50 years) and a surprise all its own. Needless to say, that stability didn’t last into the latter stages of 2018. The 2018-19 season has already seen several coaching changes made with the Edmonton Oilers, St. Louis Blues, Los Angeles Kings, and Chicago Blackhawks shaking things up. As always, more coaches could join that list before the season wraps.

This whole topic has been a bit weird. When the head coach firings eventually came in 2018, they came in a domino effect. Some have worked out, some haven’t. Perhaps the most surprising factor here is how teams seem to remain extremely committed to their general managers despite clear flaws. Whether it’s the fear of change or the unwillingness to try something new, the teams that seem content to avoid making changes at the top are in for a rude surprise of their own when nothing improves.