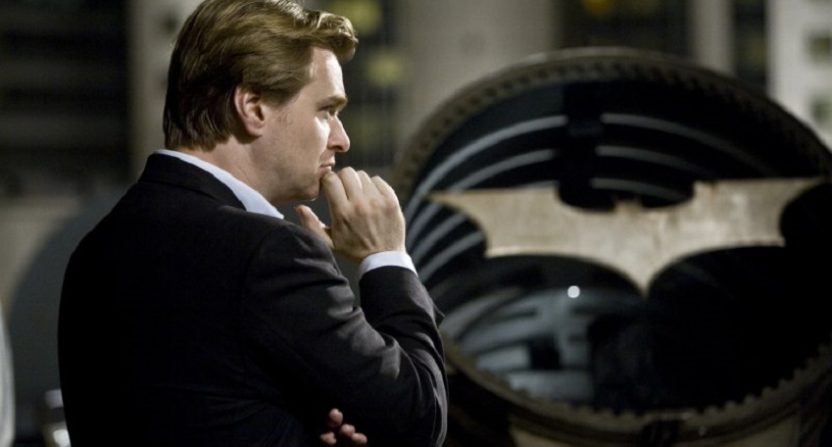 Christopher Nolan is widely considered to be one of the best movie directors working today. Very few filmmakers can draw an audience based on his or her name alone, but Nolan is in that select A-list company after directing a trilogy of Batman films and subsequent blockbusters that strive to challenge audiences. Would Dunkirk have finished No. 1 at the box office this past weekend if Nolan’s name hadn’t been attached? Maybe, but he sure created a huge amount of anticipation for the film.

With the release of Dunkirk, Nolan now has 10 movies on his filmography, a nice round number made for listicles. We may get around to ranking Nolan’s movies (and you really can’t go wrong, even looking all the way back to his first film, Following, made nearly 20 years ago), but thought it would be more fun for The Comeback’s staff to make their picks for the best of his films. We’ve got a pretty good mix, but with 10 films to choose from, there’s a lot of territory to consider. We hope you’ll join in the conversation with your choice as well.

What is Christopher Nolan’s best movie?

Michael Grant:
In film, it’s hard to make something unique that cuts through the clutter. Memento is one of those rare movies that you remember where you were when you first saw it. It’s the Pulp Fiction of thrillers. Memento was so jarring, different and unexpected that you couldn’t wait to watch it again, again and again. Not only did it live up to the word-of-mouth hype, it surpassed it in a way that you couldn’t wait to tell someone else of this masterpiece.

Memento is the best modern-day film noir ever made – and one of the best film noirs, period. If you’re a fan of the genre, you’ll appreciate the black-and-white photography, the vigilant protagonist, the femme fatale and the sinister nature of the plot. On the surface, the story isn’t complex. However, the degree of difficulty in successfully telling the story is complicated.

Memento is a well-crafted puzzle that you slowly work your way through. Telling the story backwards isn’t merely a gimmick. It’s the only possible way to reveal the tale of a detective with a faulty memory trying to solve his wife’s murder.

The ending is riveting and the movie closes with the perfect line: “Now, where was I?”

David Rogers:
Picking Christopher Nolan’s best film is an extremely difficult request. How can you possibly pick just one when he has so many successes to his name?

If pressed, I’d select Memento as my top choice. Memento was my first introduction to Nolan and it still proves to be a brilliant work of storytelling and editing. I remember renting the movie from Blockbuster and hearing that I needed to unplug my phone, turn off the lights and give it my full attention. That was some sound advice. The intricate weaving of two story arcs, one in color and one in black and white, moving backward and forward in time before meeting in the middle is brilliantly executed. The extremely complex, yet surprisingly simple story — don’t trust the narrator — not only ranks as my favorite Nolan film, but one of my all-time favorite films.

Jay Rigdon:
Nolan has made 10 movies and he’s made 10 good to great movies, a batting average that should be the envy of just about every other working director. You can quibble over just how great his ceiling is, but it’s hard to argue that his floor isn’t the highest in Hollywood.

But perhaps his most important feat came early in his career, when he tackled a comic book character and franchise that lost its way in the ’90s. Batman Begins followed the first two Sam Raimi Spider-Man films, as well as Bryan Singer’s first two X-Men films, all good-to-excellent examples of the genre. But Nolan had a tougher task. Those movies weren’t burdened with any prior film history for their characters, whereas Batman had been on the big screen, and in a very unfortunate iteration prior to Nolan’s reboot.

Batman Begins took the character seriously, but not too seriously; Nolan wisely cast the familiar and warm presences of Michael Caine and Morgan Freeman to help humanize the perfectly cast Christian Bale. He created a world somehow grounded both in the comics and in reality, with a grittier tone necessitated by the campy failures of the ’90s films, and all this despite having directed just two feature films to that point, neither of which approaching the scale of Batman Begins.

The Dark Knight might actually be a better film; it’s streamlined, focused, and features one of the most memorable performances in recent cinema. But the moments that hit hardest in The Dark Knight wouldn’t be possible without the groundwork laid in Batman Begins, a movie that wasn’t supposed to be nearly as good as it ended up being.

Phillip Bupp:
Christopher Nolan’s best movie, as well as my favorite Nolan movie, is The Prestige. I always love movies that require you to think and The Prestige requires you to do that and then some. It is a bit complicated and you probably need to watch it at least a few times to understand most of it (you’ll never fully understand it), but that’s what makes it great. Just when you thought you figured it out, the next twist happens.

David Lauterbach:
The Prestige is Nolan’s best film for a very simple reason: it pulls off Nolan’s best trick. When you see Interstellar, there are huge hints throughout the movie that Cooper was in the bookshelf. Inception really isn’t all that complex and explains itself consistently throughout, but then again I have seen it 20-ish times. Dunkirk is a cinematic event that combines amazing editing and cinematography, but doesn’t have any time or mental tricks. The Prestige, meanwhile, is completely unpredictable, much like Memento. The fact that the viewer pretty much has no hints or clues to lean on to figure out that Christian Bale actually plays twin brothers is pure Nolan and absolutely brilliant.

What also makes The Prestige the best is the wealth of incredible acting in it. Yes, I know there are plenty of great actors in all of Nolan’s other films, but the lengthy cast in The Prestige is perfect. Hugh Jackman and Bale are brilliant magicians. Rebecca Hall, Piper Perabo, and Scarlett Johansson play fantastic love interests. Michael Caine is classic Michael Caine. After that, you also throw David freaking Bowie into the mix. My god.

Ian Casselberry:
Those who know me well are going to be stunned that I’m not picking one of Nolan’s Batman films. Batman Begins is my favorite of his movies and The Dark Knight shows what kinds of stories (and themes) are capable of being told in the superhero genre. But I think Inception is Nolan’s best film because it allowed him to incorporate his interests in science fiction, globe-spanning adventure, crime and espionage, along with a fascination with time that has been in several of his movies.

Nolan also demonstrated his talent for widescreen action following two Batman films. Inception provides visuals we’d never seen before, allowing Warner Brothers to base an entire marketing campaign on folding cityscapes. The movie has been an influence ever since. What does Doctor Strange look like without Nolan and cinematographer Wally Pfister establishing that path? He also made Leonardo DiCaprio a believable action star, somehow made Marion Cotillard terrifying, and essentially introduced the world to Tom Hardy with that wonderful line, “You mustn’t be afraid to dream a little bigger, darling.” That can be applied to Nolan himself.

Liam McGuire:
Christopher Nolan hasn’t made a bad film. Even my least favorite, Interstellar, is a technical marvel. So choosing his best film is tough. My heart says Inception. It’s a unique story thats superbly cast with incredible visuals heightened by Nolan. It’s truly mind-bending and it’s a film I go back to quite a bit.

I have to mention The Dark Knight as well, which is a near-perfect superhero movie.