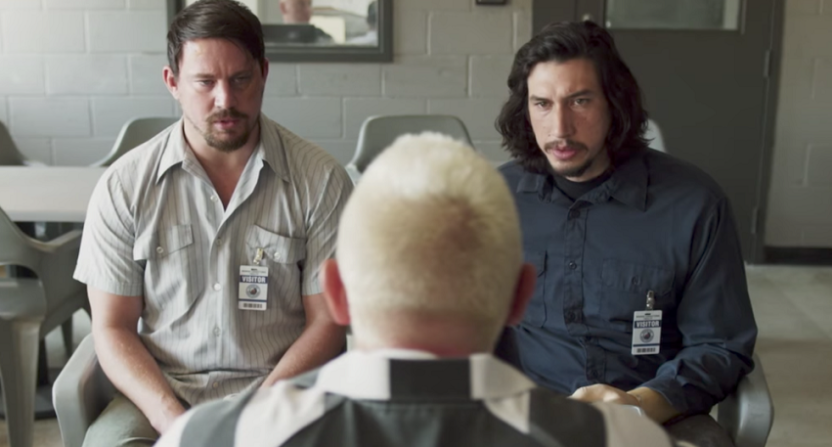 Considering what’s going on in the country — and the world — these days, this will be a terribly short-sighted statement. But if you’re a fan of Steven Soderbergh, the world seems like just a little bit of a better place with him making movies again.

Soderbergh is probably best known for directing the Ocean’s Eleven trilogy of films about a slick band of thieves who pull off big-time heists of Las Vegas hotels (and stick it to their rivals in the process). So perhaps it shouldn’t be a surprise that he chose what appears to be the opposite of an Ocean’s Eleven story for his return to film. Logan Lucky is a heist film like those Ocean’s movies, but these thieves aren’t cool professionals. Nonetheless, they have their eyes on a big prize.

There certainly are parallels between Logan Lucky and the Ocean’s films. Jimmy Logan (Channing Tatum) and his brother Clyde (Adam Driver) could be viewed as a blue-collar (or hillbilly, as the movie points out) version of George Clooney’s Daniel Ocean and Brad Pitt’s Rusty Ryan. (No, Driver isn’t snacking on something in virtually every scene, as Pitt memorably does in Ocean’s Eleven. Maybe that’s because his character has only one hand, having lost his left extremity in Iraq.)

Perhaps the most memorable performance of Logan Lucky is Daniel Craig as hillbilly explosives expert Joe Bang, someone that’s about as far away from James Bond as an actor can get. This isn’t Don Cheadle’s Basher Tarr, who can get his hands on the most modern explosives and EMP devices that can cause blackouts in Las Vegas. Bang is like the guy who liked to mix chemicals in a classroom or his garage to see if he could make them explode. The device he creates for this job consists of low-sodium salt, Gummi Bears, and bleach in a plastic bag stuffed in a jar. As he says, we are dealing with science here.

The Ocean’s similarities don’t extend much further than that, however. There isn’t a Terry Benedict-type villain in Logan Lucky. Jimmy Logan is largely in this position because of how difficult it is for him to find work in rural West Virginia. He loses his construction job because of a pre-existing condition (a knee injury that ended a promising football career) that is a liability issue with an insurance company. He plans a robbery to have enough money to fight for custody of his daughter, who lives with her mother (Katie Holmes).

However, the construction job that let Jimmy go also gives him the knowledge needed to pull off his intended heist. He wants to rob Charlotte Motor Speedway. Working to replace the old pipes beneath the speedway that are breaking down and threaten to leave sinkholes throughout the race track’s infield, Jimmy is shown the pneumatic tube system that vendors use to send money from food and merchandise booths into a vault underneath the complex.

Jimmy builds his plan on that foundation, showing that he’s not the dummy most people think he is. With his brother’s help, along with their sister Mellie (Riley Keough), Jimmy concocts a scheme that involves starting a prison riot, shutting down the track’s electrical grid so customers have to pay with cash, and putting the money in trash bags to avoid suspicion from security guards. The heist becomes more difficult when the construction site plans to close up, forcing Jimmy to move his plan up one week. Instead of robbing the speedway during a small car show, they now have to do it during the Coca-Cola 600, one of the biggest NASCAR races of the year.

Some might argue that the NASCAR setting makes Logan Lucky a sports movie, but the Coca-Cola 600 just provides the background for the heist. None of the story actually involves the race itself, though there is a fictional NASCAR driver in the story (Sebastian Stan), which allows Soderbergh and mystery screenwriter Rebecca Blunt to poke fun at athletes and their extreme nutrition regimens. That often seems a bit more curious for race car drivers, though they obviously have to be in outstanding shape to endure the intense conditions of racing.

Interestingly, the story also pokes some fun at the relationship between drivers and sponsors — in this case, an over-the-top energy drink and its dickhead British owner (Seth McFarlane) — that puts a celebrity in the position of endorsing a product he would never consume in real life (especially when he’s concerned about stuff like his glucose levels).

But those details just provide more depth to the story, rather than affect the narrative. A NASCAR driver isn’t in on the robbery, nor is he some wacky part of the scheme like getting kidnapped or using his car or crew in the heist. So it’s difficult to put Logan Lucky in the sports movie category. The staff at Charlotte Motor Speedway doesn’t come off looking particularly good before or after the robbery, but that’s a matter of creative license for the story.

On one hand, it’s curious that Soderbergh would go back to the heist films that are among his most popular for his return to feature film directing. If you look at his filmography, this isn’t a director who often repeats himself and challenges himself with a variety of different stories and subjects. On the other, going against expectations is something Soderbergh has done throughout his career. He’s also said in interviews that a project with mainstream appeal was sort of an experiment to see if he could successfully work within the current Hollywood system.

The director said he was retiring from making movies after 2013’s Liberace biopic Behind the Candelabra (or if you prefer to be snobby about it, Soderbergh’s last theatrical film was 2012’s Side Effects), lamenting the way studios treated directors and saying movies didn’t matter as much culturally as they once did.

In the era of Peak TV, Soderbergh certainly had a point worth considering. He made the jump into television himself, directing every episode (20 altogether) of Cinemax’s The Knick, a drama about a 1900 hospital in New York and its brilliant, opium-addicted surgeon John Thackery (played by Clive Owen). He also executive produced a series based on his 2009 film, The Girlfriend Experience, for Starz.

But Soderbergh has always seemed like a guy with diverse interests that serve his creativity and curiosity, somebody who gets bored just doing one thing. He couldn’t quite stay away from film anyway, helping out Spike Jonze on Her and re-editing films like Heaven’s Gate, Raiders of the Lost Ark and 2001: A Space Odyssey into new cuts. Maybe he just needed some me time to work on film as a hobby until he got the itch to direct a film again. Thankfully, that’s happened. Logan Lucky isn’t one of Soderbergh’s best films, but it’s a nice return and hopefully sets him up for better stuff in the future.

4 thoughts on “Logan Lucky returns Steven Soderbergh to heist films, but this one isn’t as fun as Ocean’s Eleven”