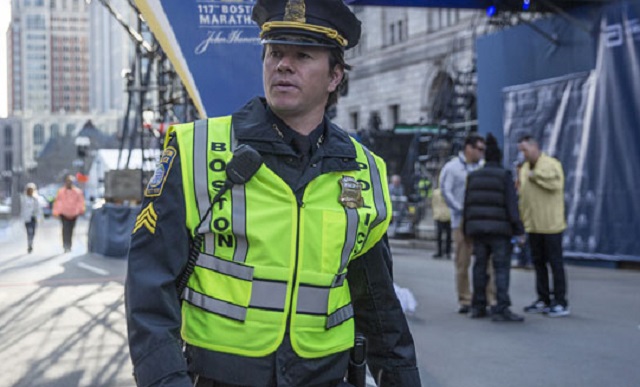 Patriots Day could have been exploitative, but is deeply respectful and admiring in its story of a community pulling together in the face of horror.

Director Peter Berg and producer Mark Wahlberg stepped into some murky territory with Patriots Day. Though few will likely argue that it’s a story that shouldn’t be told and deserves a Hollywood adaptation, the 2013 Boston Marathon bombing happened just over three years ago and is still a very visceral, painful experience for those who were involved directly in addition to an entire community. Was this movie made too soon?

Though some could point to a calendar and simply answer yes to that question, how evocative Patriots Day is for viewers will surely vary depending on experience and mindset. As a detached observer — albeit one who was following the story of the bombing and the two culprits — watching those events dramatized on screen quickly brought back memories that haven’t faded very much. Though my rational mind told me these were actors portraying real-life people I clearly remember seeing and reading about in the news, my emotional mind almost felt as if I was watching a documentary.

That’s not to say that any of Patriots Day is filmed like a documentary. There are no talking head interviews (unless you count the epilogue at the very end of the film, shown before the closing credits) or recall of the events surrounding the Boston Marathon bombing. This is absolutely a dramatization, and a thrilling one. It’s a testament to Berg’s ability to get us into the moment, make us care about the characters involved in this story, and painstaking efforts to chronicle everything correctly and respectfully.

Berg begins the film very slowly, but there’s a point with his storytelling patience. Though Patriots Day is a special occasion in Boston, a local holiday commemorated by the Boston Marathon and an early matinee Red Sox game at Fenway Park, it’s a way of life for the city and the people who live there. April 15, 2013 was supposed to be a normal day for everyone involved, whether it was those running the marathon, the people who worked or volunteered with the event, the many who came to watch and cheer on the runners, or those who live in the region and either eventually found themselves involved in what was to happen or had their feelings of safety and home violently upset by a senseless terrorist attack.

As the story begins, you might wonder why the story is following particular characters. But if you’re familiar with the actual events, their role in the overall narrative will soon become clear. And if you’re either unfamiliar (which kind of seems unlikely if you’re willing to watch this film, but you never know) or memory has faded over the past three-plus years, just trust that nothing included in the story is accidental or incidental. All of that helps to create tension, building toward the moment you know is coming, to the point that it almost becomes unbearable.

Each of these people were involved or somehow affected in one way or another. Some suffered tragic injuries as a result of the two bombs that exploded near the marathon’s finish line. Others were in the wrong place at the worst possible time, either experiencing fatal consequences or enduring the most terrifying encounter of their lives. Their paths unfortunately crossed with brothers Tamerlan and Dzhokhar Tsarnaev as they attempted to flee local police and federal agents, while also planning their next attack in New York City.

That somewhat applies to Wahlberg’s Tommy Saunders, not based on a real person, per se, but a composite of several police officers who were involved in crowd control during the marathon, then pulled into the hunt for the Tsarnaev brothers. Part of it is a professional obligation, to serve and protect and exact justice for their community. Maybe there’s a need for vengeance as well, an impulse to attack those who would attack us, who so heartlessly disrupt our way of life and put people in mortal danger.

But there also seems to be a sense of conquering fear, of questioning what they’ll do in the face of true evil. That might be leaning a bit too far into philosophical territory for some people, almost getting existential. Yet Berg and Wahlberg are willing to risk getting sentimental, nearly to the point of corniness, because those involved in pursuing these terrorists surely asked themselves such questions in their quieter moments, when fear, rage and urgency didn’t dominate their thinking.

What makes people do something like this to their fellow man? How can people be so angry and cruel? How can their moral compass be so terribly broken, their faith so warped? Having an attack like this occur within a community, to see the injured and the dead with your own eyes, could cause anyone to question everything. What makes sense after something like that? Or does it reinforce what you already know to be important, what you already hold dear in your life?

However, this isn’t Oliver Stone’s World Trade Center (2006), attempting to incorporate the spiritual and sentimental in an effort to be inspirational. There is no extra sheen or flair painted on these characters or their setting to make them seem even more heroic and noble (or in the case of the Tsarnaev brothers, more evil) than their motivations and actions already make clear.

Some might feel that the movie goes there when the characters talk about Boston and how its sense of community make it unlike many other places — especially big cities — where such an attack might have occurred. But would anyone really argue with those involved feeling that way, and for Berg and Wahlberg to want to celebrate that sense of familial strength that was such an important aspect of Boston’s recovery? Being from that community or spending enough time talking and researching to the people directly and indirectly involved, director and star would have to be inhuman not to feel moved by that. Especially when there was a deep sense of obligation to tell this story correctly and be respectful, rather than exploitative.

Yet Patriots Day is also a thrilling procedural. This is a movie that works on several different levels. Even if you take the visceral emotion, shuddering tension and philosophical questioning out of this story, it is still an extremely gripping narrative about a terrible crime that has occurred and the effort to bring those who perpetrated that violence to justice. Berg does an excellent job of depicting the tedious work, will, and bureaucracy involved in a case like this, that goes from local to federal jurisdiction and engages an entire nation in an instant. The sheer manpower and machinery required to achieve the objective is staggering.

Ultimately, Berg doesn’t forget that what makes this story most important — what sets it apart as an inspiration, not just a tragedy — is the people involved, whether they’re real-life figures or true-to-life versions of the many whose lives were affected. He conveys the deep tragedy of a young boy killed, whose body must be left to maintain the scene, knowing how such a decision conflicts with our basic sense of humanity. The movie depicts the horror of being unwittingly pulled into a life-threatening situation, and the triumph of somehow persevering. All of this combines to make Patriots Day a truly special film that deserves your attention whenever you are ready to see it.