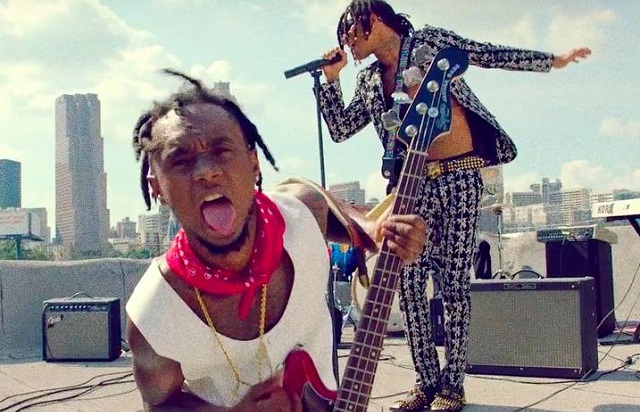 The past year in music included great songs from legendary artists, current superstars and up-and-coming musicians ready to make an impact.

In a year of upheaval leading to an uncertain future, the songs of 2016 were filled with protest, sadness, and personal statements. As much of a downer as all of that sounds, the biggest tracks of the year were still party-fueled joyrides that led to internet memes and feuds with Lady Gaga.

The election of Donald Trump has led to many think pieces about how great art and music will be over the coming years as they protest his presidency. But as these songs below demonstrate, music was already pretty great in 2016.

Unlike the collaborations on the recent Kanye West and Chance the Rapper albums, this posse cut on Brown’s latest album, Atrocity Exhibition, is dangerous, hard-hitting, and a lot of fun. Over a jingly beat, each MC plays to their strengths on the mic without trying to outdo their fellow collaborators creating one of the best rap tracks of the year.

Bowie’s final album, Blackstar, is rife with allusions to his life and how he may be perceived in death, but “Lazarus” is Blackstar’s most blatant obituary. “Look up here I’m in heaven/I’ve got scars that can’t be seen,” begins a tale of fear that eventually leads to freedom as he nears the end of his life and his battle with cancer.

A Tribe Called Quest – “We the People…”

The hook for “We the People…” may have sounded far-fetched when Q-Tip recorded them earlier this year. But after the election of Donald Trump behind a rhetoric of hate, the lines “All you Black folks you must go/All you Mexicans you must go/And all you poor folks you must go/Muslims and gays, boy we hate your ways/So all you bad folks, you must go” seem closer to reality than ever.

Not since The X-Files theme by Mark Snow has a theme song captured the essence of a television show so perfectly. Reminiscent of John Carpenter’s horror soundtracks, Dixon and Stein set the creepy atmosphere throughout Stranger Things with their score without going over the edge into parody.

The best 90s throwback song of the year is the personal account of Mitski, a Brooklyn-based, born in Japan indie rocker, and her realization that an “All-American boy” might not be the person for her due to cultural differences. This song outdoes anything Rivers Cuomo and Weezer has done in the past 15 years.

The year of Beyoncé began Feb. 6 when she released the video for “Formation,” and then appeared the next day to upstage Coldplay and Bruno Mars at the Super Bowl 50 halftime show. A protest song and a call to arms, “Formation” might become the most enduring song of 2016 and a much-needed anthem for the years ahead.

The party hit of the year gave Rae Sremmurd (Swae Lee and Slim Jxmmi), with some help from the Mannequin Challenge, their first No. 1 hit. There’s nothing flashy or groundbreaking with “Black Beatles,” it’s three guys comparing themselves to The Beatles (even Paul McCartney posted a Mannequin Challenge video) and having fun doing it.

The Avalanches – “Because I’m Me”

The Avalanches have always produced sample-heavy tracks and “Because I’m Me” is no different with its opening verse and hook lifted from an album of African American boys living in New York City public housing in the 1950s. The gaps are filled by rappers Camp Lo creating a track that feels retro and modern at the same time.

Solange – “Cranes in the Sky”

“I tried to drink it away/I tried to put one in the air/I tried to dance it away/I tried to change it with my hair,” begins Solange’s journey of repressing and eventually easing her pain. Backed by a beat given to her by Raphael Saadiq eight years ago, “Cranes in the Sky” is one of 2016’s most beautiful and emotionally charged songs.

For over 20 years, “True Love Waits” has occasionally been performed live by Thom Yorke and Radiohead without ever receiving a proper studio recording. This stripped down version (no guitars, no drums, only piano) might be one of Yorke’s best songs ever, a fitting finale for “A Moon Shaped Pool” and definitely worth the wait for Radiohead fans.