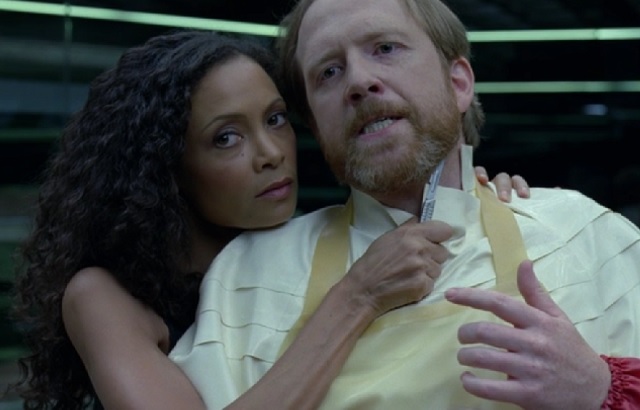 May we begin by saying there may be no better way to express job dissatisfaction than the way Lee Sizemore did in Westworld’s episode five, “The Adversary.” Taking a piss from the floor above onto the workspace virtually everyone uses to monitor activity at the park is sure to make an impression, though not a very good one. And if he had a chance with Tessa Thompson’s Charlotte Hale — he surely didn’t — that’s not happening now.

(Here’s hoping a story arc next week is dedicated to the poor schmuck who has to clean up after Sizemore. Maybe Cullen will make Sizemore do it himself. Or it could be Sylvester, the repair tech who surely pissed his pants after Maeve held a scalpel to his throat. But he’s probably not due for a demotion. Not yet, anyway.)

With each episode, it’s difficult to say which is the most important storyline. But Maeve is probably the top candidate. Her awareness continues to grow, which was strongly suggested at the end of episode five when she woke up before or after Felix was set to work on cleaning her up and showed she might control more than anyone in the park may have previously believed. (The bird flying to Maeve’s hand was almost a dark Disney touch. Is the madam of the Marisposa saloon this story’s version of Snow White? Would that make Felix her Prince?)

Maeve knows that she’s not going crazy or suffering any hallucinations after finding a bullet in her abdomen during episode four. And it’s now clear that she can wake up any time she wants to, regardless of whether the technicians put her in sleep mode. She knows there is far more going on in her existence than satisfying men and drinking whiskey, or even the previous memories she has living on the frontier, protecting a little girl (her daughter?) from an attack by Indians. Maeve has seen behind the curtain, where it becomes increasingly clear how disposable she is and how little control she has over her thoughts and emotions. (That also apparently applies to Teddy, who has been Westworld‘s version of Kenny from South Park, but realizes that he has a sinister past and is capable of being a stone-cold killer.) 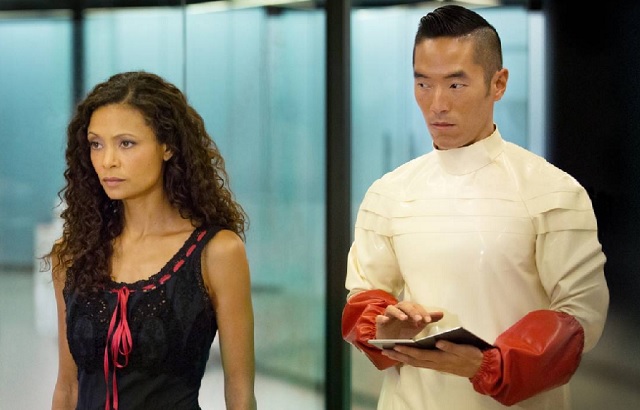 However, Maeve is working on that control thing, exploiting the ambition of Felix to move past being a “butcher” who takes out bullets, patches up wounds and gets the hosts back into circulation. He’s smarter than that (and he’s not an asshole, like his co-worker) and has empathy for the hosts. Felix wants to work on coding or perhaps be a behavioral engineer, jobs that are far less replaceable in Westworld. Though he demonstrates that he’s capable of both those positions with his work on Maeve, he may end up leading to the park’s downfall by enabling her. Or maybe he just accelerated that process, since many of the first-generation hosts seem to have some kind of sleeper programming that compels them to rebel.

For whatever reason, perhaps because he somehow feels sorry for Maeve or relates to her being trapped in a loop, Felix indulges Maeve’s desire to see the upper levels of the park’s underground headquarters. She wants to see the sausage being made, so to speak. Considering dead, bloody hosts are being hosed off while entirely new ones are being created (we see one’s artificial skin being given pigment), it’s not an inappropriate comparison. Imagine getting to see how your life, how your environment is being made. Behind glass walls, she sees artificial horses and buffalo being trained, along with saloon poker games deteriorating into shootouts being acted out. Nothing she’s experienced has been natural or spontaneous. It’s all engineered and scripted.

If that didn’t become clear to Maeve before, the point was hammered home when she sees what she thought were her memories or dreams being shown on a screen welcoming guests to Westworld. (Additionally, she essentially sees her brain working on Felix’s tablet, everything she says, every emotion she supposedly feels is laid out in code.) Her story isn’t even her own, but rather a pre-written narrative incorporated into her “build,” which can be changed depending on wherever she and the other hosts are needed in the park. That is quite a cup of punch to digest.

Not only has Maeve become more aware of what lies underneath, she essentially forces Felix and Sylvester to increase various attributes that serve her needs, rather than the park’s engineers or guests. Maeve either understands everything now or is well on her way to a far greater comprehension. What is she going to do with that knowledge? Leaning on the bar at the Marisposa and providing guidance to Clementine, not to mention letting dirty cowboys fulfill their sexual fantasies with her, probably isn’t going to be a fulfilling narrative for her anymore. One question, though: If it’s that easy to boost her attributes, couldn’t Felix also just shut her down? Or is he just too curious to see what happens in his closet version of playing God like Dr. Ford? 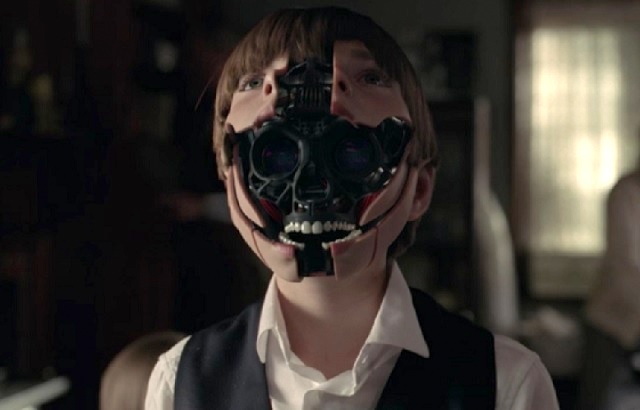 Speaking of the good doctor, “The Adversary” may also have provided further insight into Ford’s endgame. What is he trying to create with his extreme makeover of Westworld, powered by heavy machinery bulldozing landscapes and shoveling out canyons? Could he be attempting to recreate his childhood or manufacture the world he always wanted to live in? Though the guests are presumably getting to act out their hidden desires and become other people in the park, perhaps they’re just living in Robert Ford’s fantasy world.

At the very least, Ford is keeping one sliver of the park to himself. That is, until Bernard investigates the presence of five unregistered hosts in the park, discovering their existence when they display the same anomaly as the host who attacked Elsie and Stubbs then smashed his own head in during episode three. Bernard traces the hosts to a house isolated in the woods and quickly presumes that this could be the mysterious Arnold, who’s supposed to have died yet somehow seems very much alive in the park, due to the programming and commands being given to earlier generation hosts like Dolores. Whether the host is Arnold or not, he attacks Bernard, something that hosts aren’t supposed to do, and doesn’t respond to his voice commands.

However, the angry host who attacks his home’s intruder does respond to someone’s voice commands: Ford’s. He programmed them that way. The four hosts in that house were the first built by Arnold when the park opened, and they’re re-creations of Ford’s family. That little boy who Ford encountered in the park in a previous episode is a robot version of little Robert Ford. The man who attacked Bernard is Ford’s father. Perhaps this was Arnold’s gift to Ford, giving him his family and childhood back, and it’s understandable why he wanted to keep it hidden from the writers, technicians and engineers.

Though visiting his past seems a bit twisted, Ford asks Bernard if he might take the same opportunity were his dead son re-created. Had such a possibility ever occurred to Bernard? Just how large is Ford’s God complex? 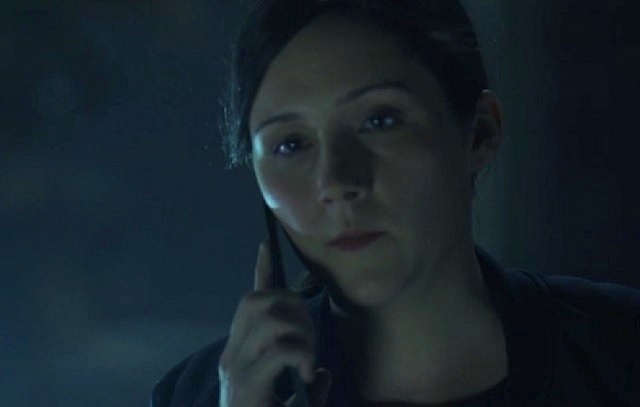 There’s one other mystery Bernard might have to investigate further: Who is stealing data from the park? Elsie discovered this during the previous episode while finding a satellite transmitter in the stray host who attacked her. (It’s also possible that the four hosts re-creating Ford’s childhood family have similar transmitters, since they displayed the same anomaly as the defective host. Bernard didn’t have a chance to find out once he was attacked and Ford showed up.) She traces the signal to an abandoned part of the park where she finds a hidden computer that’s been collecting all of this data.

Upon getting into the system and doing some digging, Elsie also finds out who’s been stealing the data: Cullen. She tells Bernard what she’s discovered as Bernard is meeting with Cullen and expressing his concerns about Ford. But Cullen has apparently already been undermining Ford on behalf of Delos, the park’s corporate overlords. Or is she doing this on her own? Regardless, Bernard has yet another person he can no longer trust.

But Elsie has found a bigger problem: Someone has been reprogramming the older hosts. The woodcutter was just the first example they discovered. Under that reprogramming, the hosts could lie (which we saw Dolores do to Ford in the previous episode) or even kill guests and administrators. Elsie then says that Arnold apparently did the reprogramming. But how is that possible if he’s dead?

Or is Arnold dead? That’s been one of Westworld‘s biggest questions after six episodes. One question going into episode seven is whether or not Elsie is dead, after someone finds her snooping around and attacks her (an outcome which was totally predictable). Why did she go to a dark, abandoned, likely dangerous part of the park by herself, instead of taking Stubbs with her? Not the smartest move by someone who’s been very smart, and harboring her own ambitions, through the first half of this story.