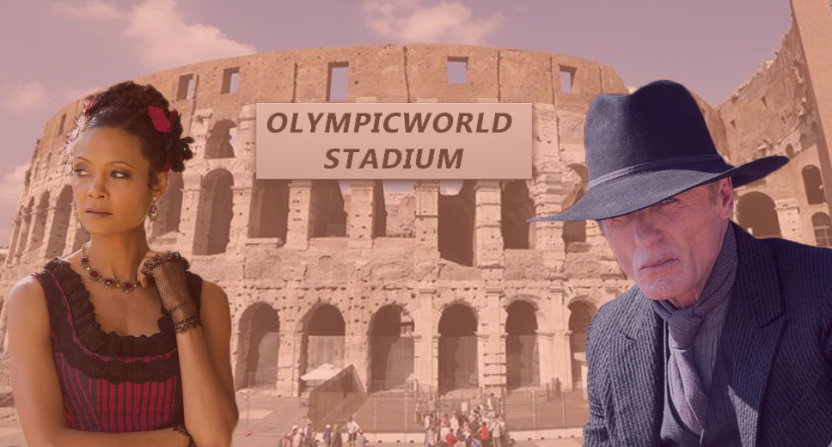 As we hurtle through the second season of HBO’s Westworld, we’ve come to see how much bigger this world is. Not only have we learned that the park is located on an island off the coast of China (and not Mars) but we’ve also learned that Westworld is one of many theme parks that Delos runs there.

There are six, to be exact, and we’ve now been to three of them. Westworld, Shogun World, and The Raj. While each park offers up their own unique brands of “entertainment,” a clear theme has developed that ties them all together. Each one represents a romanticized version of a real place through the eyes of westerners (i.e. white people). It takes complex ecosystems full of nuanced people and difficult situations and boils them down to “good vs. evil” tropes that rely more on pop culture interpretations of what those places were like rather than what they were actually like. The Raj isn’t about visiting India. It’s about visiting a version of India where westerner’s feel safe because the locals are only there to serve them tea and help them ride elephants.

We don’t know what the other parks are yet. The Westworld movies also included Romanworld, Medievalworld, and Futureworld, but the TV show doesn’t really take too many cues from its origin anymore. So the doors are open for the other theme parks to divert into different forms and experience. All we can be fairly certain of is that each park will appeal to that same demographic.

All of which leads up to the question…if there was a sports-themed Delos park, what would it be?

What we know about the people who visit (or used to visit) Westworld and the other parks are that they’re looking for an experience that provides a bit of (perceived) danger in a strange or foreign land where they might be an outsider but everything is in service of their enjoyment. In other words, a guest at the sports park wants to go there to have an experience that isn’t possible anymore in the real world that also feels familiar based on their skewed perception of history and humanity.

Here are some potential options that came to mind.

If we wanted to appeal to the most people, it would be about soccer. The problem with that is…what’s the story? Going back to a different time to play soccer doesn’t really accomplish anything. It’s not as though the game was considered “better” in the past and there isn’t really much of a hook beyond getting to play in large stadiums in front of adoring fans. We suppose you could step on the pitch against host versions of the game’s most iconic players in their primes, but that doesn’t quite fit what these parks are about.

While this would severely limit interest to Americans (which might be the case anyway), you could make a park dedicated to the world on 1930s American football. It feeds perfectly into this notion of a time-gone-by where “things were better.” The hits were harder. There wasn’t all this showboating and grandstanding. It’s when “men were men,” as the saying goes. And it would be the perfect opportunity for some rich dude to feel empowered by taking part in an old-school football game in a replica old-timey stadium.

You get a choice between playing in a college football game or an NFL game. There are all different stadiums strewn throughout the park from an era-appropriate Notre Dame Stadium to a replica of the old Polo Grounds. You strap on your leather helmet and flimsy padding and then head out onto the field for a muddy slobber-knocker of a football game. You can be the hero at quarterback or maybe you’d rather knock some skulls around as a linebacker. Whatever you do, it feels like the “authentic” version of the sport back before it became big business.

Ultimately, however, there is a way to combine that sense of “when things were more authentic” with a worldwide audience. You recreate the Olympics. And not just any Olympics, the Ancient Olympic Games in Olympia, Greece. Dated around 776 BC, guests would be allowed to participate in a never-ending Olympic competition for the right to win gold.

Because we’re playing into a westerner’s mentality of what this competition was like, we can even play fast and loose with specific events. Many of the iconic events we’ve come to think of with the Olympics (long-distance running, wrestling, boxing) didn’t actually exist during the first games, but we’re not going to let facts get in the way of a good story. Plus, these Olympic games used to include events such as chariot races and pankration (the MMA of its day), we can include those two.

It’s the most likely option for a Delos sports-themed park because it provides so many opportunities for people to compete, even if the competitions are likely rigged (we’re guessing you could choose what level of athlete to compete against like in video games). They’d probably even change it up so women are competing as well. Plus, you can use the backdrop of Greece to provide all sorts of other entertainment much in line with what goes down in Westworld and the other parks.