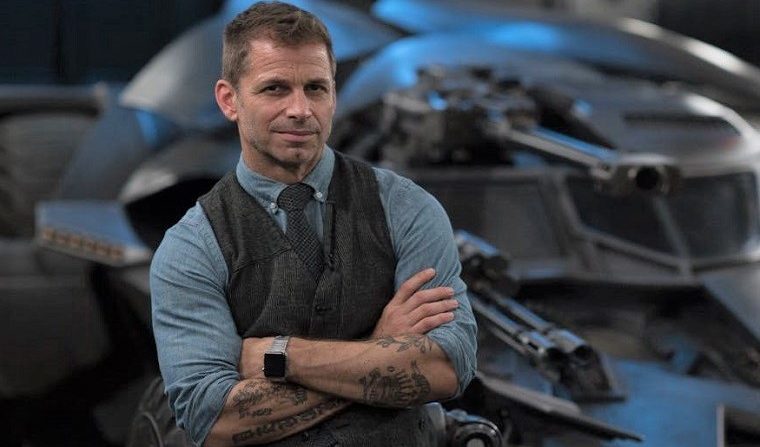 Marvel is just days away from releasing the next addition to its Cinematic Universe with Black Panther, one of three movies the studio will unveil in 2018, including Avengers: Infinity War and Ant-Man and The Wasp. Meanwhile, DC only has one movie for the year and won’t release Aquaman until November.

Though DC drew positive reviews for last summer’s Wonder Woman (which is currently making the rounds on HBO), last November’s Justice League was a disappointment — nowhere near the blockbuster that Warner Brothers was anticipating. Justice League‘s production was plagued by reshoots and a change in directors, resulting in a movie that didn’t look or feel cohesive. Zack Snyder left the film before those reshoots were done because he didn’t want to leave his family following his daughter’s suicide, and Joss Whedon — who had been hired for some rewrites — finished the reshoots and eventually recut the film.

But Snyder may not have left Justice League on his own terms, as the story was originally told. Writer Josh L. Dickey, who’s leaving his post at Mashable, took an opportunity to run through some of the stories he broke during his career covering the entertainment industry. One of those was a report that Warner Brothers had decided to reduce Snyder’s role (along with his wife, Deborah, a producer on his films) as they moved ahead with DC Films. According to Dickey, however, the truth was that Snyder was actually fired and that couldn’t be fully reported at the time, perhaps because of the family tragedy surrounding the situation.

Since I'm shifting into DGAF mode, here's a hot one for ya: Zack Snyder was fired from the DCEU just over 1 year ago. Couldn't write it ~quite~ that way at the time, but was able to tapdance around it [clumsy/oblique headline not mine] https://t.co/7cht70rCaG

Snyder is largely blamed for setting a dark tone for the DC movies with Man of Steel and Batman v Superman: Dawn of Justice, a creative direction that Warner Brothers has tried to steer away from as fans call for lighter, more positive adventures for their superheroes, much like what Marvel has done so successfully. Worst of all, Snyder’s decisions prevented DC from capitalizing on the popularity of characters like Superman and Batman, stalling the DC Extended Universe in a creative limbo. Currently, no Justice League or Man of Steel sequel is in development and a new Batman movie is being developed by Matt Reeves (War for the Planet of the Apes), likely without Ben Affleck starring.

However, if Wonder Woman is held up as the best example of DC movies, Snyder should get some credit there too. He cast Gal Gadot as the Amazon princess and helped write the movie’s screenplay. Yet in the bigger picture, Snyder put DC on a track that Warner Brothers is trying to change and apparently didn’t want him around to have a say in where these superhero movies will go next. Marvel is way ahead in this game, and DC has a lot of catching up to do, stumbling badly in its attempt to create its own cinematic universe while forgetting what makes those iconic characters special.

Snyder got things off on the wrong foot with a mopey Superman in Man of Steel and took the rest of DC’s films in that dark, grim direction, trying too hard to shoehorn elements of a shared universe in Batman v Superman, rather than establishing the story in multiple films. Justice League suffered because of that, depriving Warner Brothers of what should have been a surefire hit but instead fell far below expectations.

If Snyder was indeed fired, many will take it as an encouraging sign that Warner Brothers took the initiative to correct the problems with DC Films. Allowing Snyder to save face during a time of personal tragedy was commendable from a PR standpoint, though it may have concealed the studio making a tough decision.

Warner Bros. and DC is still trying to milk what it can out of Justice League with the digital and Blu-ray releases coming up. But the feeling is that the studio is trying to move on as well. In addition to Aquaman coming out this year, Shazam (a notably lighter film) and a Wonder Woman sequel are set for 2019 and a Flash movie is in development for the following year (now on its fourth director). Several other films are in various stages of development, featuring The Joker, Deathstroke, Batgirl and Nightwing, while Margot Robbie is trying to make a Harley Quinn movie. So many projects makes it appear as if DC Films doesn’t really have a plan, which goes back to getting off to such a bad start.

Is Snyder entirely to be blamed for that? Whether fair or not, his fingerprints are all over the movies that have been made and Warner Brothers has been trying to clean the glass for upcoming films that are more uplifting and fun. But news of Snyder being fired changes the narrative, even if the ultimate process would have been the same after he left Justice League. Perception is important and DC is trying hard to change it, hoping that it’s not too late to hit a reset button.

1 thought on “Zack Snyder was reportedly fired from Justice League, which may be encouraging for DC Films and fans”