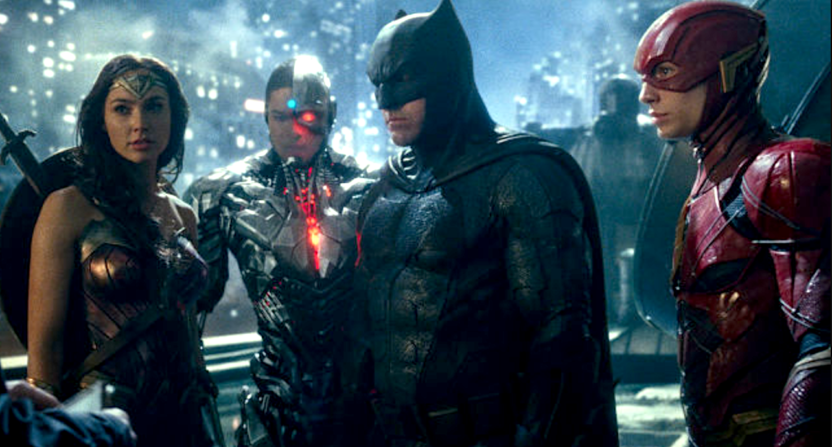 If you had told most superhero movie fans 10 years ago that a film with Batman, Superman, Wonder Woman, The Flash and Aquaman was going to be made, it would almost certainly have been the most anticipated superhero movie ever. Yet Justice League seemed to come with a fair amount of dread going into its release.

As you surely know, the main reason for that is the films leading up to Justice League haven’t been very good, defined largely by Zack Snyder’s vision of a darker, grimmer, more adult world for DC Comics’ iconic heroes. A tumultuous production, confirmed by Joss Whedon replacing Snyder under tragic circumstances, in which the tone of the film shifted seemingly on the fly, did little to instill hope either. Warner Brothers knew it had to make the movie more fun. Also, the success of Wonder Woman dictated a more prominent role for the character.

Ultimately, Justice League doesn’t quite work. The mash-up of different tones and refurbished narratives is rather apparent in the final product. Yes, it’s the best of the DC films, but that’s a back-handed compliment. Had this movie come out 10 years ago, it probably would be regarded better. But we’ve seen superhero films at their best, and this falls short. The best that can be said is that it created promise for the future. Seeing this group in another film (whether or not it’s with Ben Affleck’s Batman) would be fun.

Here are the big reasons Justice League just wasn’t the superhero blockbuster that so many were hoping (and others were dreading):

This was a course correction for Batman v Superman: Dawn of Justice

Last year’s Batman v Superman: Dawn of Justice was meant to lay the foundation for Justice League by introducing Batman and Wonder Woman into the DC cinematic universe that was established by 2013’s Man of Steel.

But the interpretation of an older, angry Dark Knight who thought the best way to protect the world from an all-powerful being like Superman was to kill him with a Kryptonite spear didn’t go over very well with fans. (And that includes many who enjoyed Frank Miller’s The Dark Knight Returns comic book miniseries that influenced Zack Snyder and Ben Affleck’s take on the Caped Crusader.) Justice League even makes fun of how unhinged Batman was, mocking his ridiculous “Do you bleed?” line from BvS.

Henry Cavill’s sullen, angsty Superman wasn’t very appealing either. From a story standpoint, Clark Kent’s behavior could be explained. The world was fearful of an alien powerful enough to take over the planet if he so chose. And Kent didn’t trust humanity either, influenced by a father who convinced him that he would be persecuted. It’s a modern interpretation of the Superman mythos that makes sense. Yet fans missed a Superman who had some fun being Superman, best portrayed by Christopher Reeve.

So apparently, the approach was to kill Superman to fix him. Or that’s how it turned out, at least. Though he’s not shown in virtually any of the marketing for Justice League, it really shouldn’t be a spoiler to say that Superman returns. And who wouldn’t be somewhat different after coming back from the dead (or whatever state Superman was in)? So Superman is lighter — literally. The red and blue in his costume is brighter than in two previous films. He makes jokes. He’s a man happy to be alive.

But as expected when Joss Whedon took over directing duties from Snyder and rewrote the script, there are more quips among these superheroes. They’re not all grim and brooding. They’re actually fun to watch and spend two hours with. Yes, even Batman — who probably undergoes the biggest personality change of all. Apparently realizing that he was a major asshole in BvS, Bruce Wayne tries to make amends. Or maybe just having Wonder Woman around more often cheered him up. Alfred (Jeremy Irons) certainly seemed happy that Bruce was spending some time with a woman again.

One of the big curiosities about Justice League was how Henry Cavill would look in scenes that were reshot or added once Whedon took over. In one of the more hilarious developments in recent moviemaking, Cavill had to keep the mustache that he grew for the new “Mission: Impossible” film he was shooting. So for his new scenes as Superman, his facial hair would be digitally erased.

Unfortunately, viewers have to see the result right away in Justice League. An early scene features Superman and the lower half of Cavill’s face — notably the portion below the nose doesn’t quite look right. Personally, I don’t think it’s as bad as other critics have made it out to be. But if you notice it, it’s obviously a distraction on some level. We’ve seen Cavill’s face enough to know that it looks different. And it’s too bad, because this really is the Superman we’ve been waiting for him to play, for Warner Bros. and DC to portray on film.

Hopefully, we get to see the renewed, lightened-up Superman in a Man of Steel sequel soon. If there’s one takeaway from Justice League, it’s that we need another, better Superman movie. That should be the next move after Wonder Woman 2 (and Shazam, if that’s considered part of the DC slate).

A movie like Justice League needs a menace threatening enough to bring the world’s greatest superheroes together. But Steppenwolf (voiced by Ciaran Hinds) ain’t that guy. Part of the problem is that he looks like he’s in another movie because the CGI rendering is so bad. Yes, Steppenwolf is an alien and larger than human beings. But he doesn’t look real, most notably in close-ups. And though he fights Wonder Woman, Aquaman and Superman, it never quite feels like he’s in the same space as those characters.

Another issue is that nothing has been established with Steppenwolf. Yes, he’s the “destroyer of worlds” or something like that, but basically he’s an errand boy, sent to Earth along with his Parademon minions to retrieve the three Mother Box devices that will allow him to remake the planet into whatever his ruler needs. And that’s really the most interesting thing about Steppenwolf: He hints at the more formidable, more interesting villain in Darkseid. Darkseid is the payoff. Steppenwolf is just prologue.

It’s impossible not to compare DC’s movies to what Marvel has accomplished. And Justice League largely works because it follows at least some of Marvel’s blueprint. But the main reason this movie doesn’t resonate the way it should, the way so many fans hoped it would, is because DC didn’t build up to its signature superhero team-up properly.

Marvel took five films, over the course of four years, to introduce the characters who would become The Avengers. (It also certainly didn’t hurt that those films were quite good. OK, Iron Man 2 might be one of the weaker Marvel films because it’s largely set-up. But I like The Incredible Hulk more than a lot of fans do.)

DC arguably had four, but really only two of them laid groundwork. Batman v Superman was essentially Justice League Beta, with both Batman and Wonder Woman having backstories that we didn’t see. And Suicide Squad had nothing to do with Justice League, other than scenes with Batman and Bruce Wayne inserted to show that the movie was part of the DC cinematic universe. Man of Steel and Wonder Woman were the movies that should’ve started DC on the path toward Justice League with Aquaman and The Flash to follow.

Instead, we’re introduced to those characters (disregarding their shoehorned cameos into BvS) in Justice League and devoting some two-thirds of the story to learning about them. The scenes where Bruce Wayne recruits Arthur Curry and Barry Allen to his team are some of the best in the movie. (And both were great characters whom we needed to see more.) But what if those had been scenes during the credits in two standalone films? That would’ve built anticipation that Justice League never really earned.

Taking a shortcut also made Steppenwolf a completely uninteresting villain. The main bad guy in The Avengers, Loki, was better because we got to know him in the first Thor film and understood his motivations, which were even more compelling because of his personal connection to one of the Avengers. Steppenwolf is just some guy who maybe could have been introduced through a number of films.

The end credits scenes are the best part of the movie

Let’s end on a positive note. Superhero movies have become known for their mid- and post-credits scenes. They’ve become expected. I want to stand up and shout in the theater whenever I see people leaving one of these movies during the credits. Have you learned nothing? But maybe some people just don’t care.

Most of these scenes are used to hint at what’s to come. The gold standard is the mid-credits scene for Iron Man when Samuel L. Jackson’s Nick Fury appears in Tony Stark’s house to tell him about the Avengers Initiative. That let fans know: Holy shit, Marvel is really going to do this! A cinematic universe resembling what exists in Marvel Comics was coming to the big screen.

The end credits scenes for Justice League don’t quite reach that level, but they’re among the best extra scenes ever made for a superhero movie. One of them is total fan service, but the best possible example of it, posing a question that DC Comics fans have asked for decades. It’s just fun. The second provides something that was refreshingly unexpected and definitely promises more to come.

I imagine many fans left the theater feeling better about Justice League because of those scenes. There’s still hope for this DC cinematic universe yet, true believers. This movie was a much-needed fix for something that was broken.