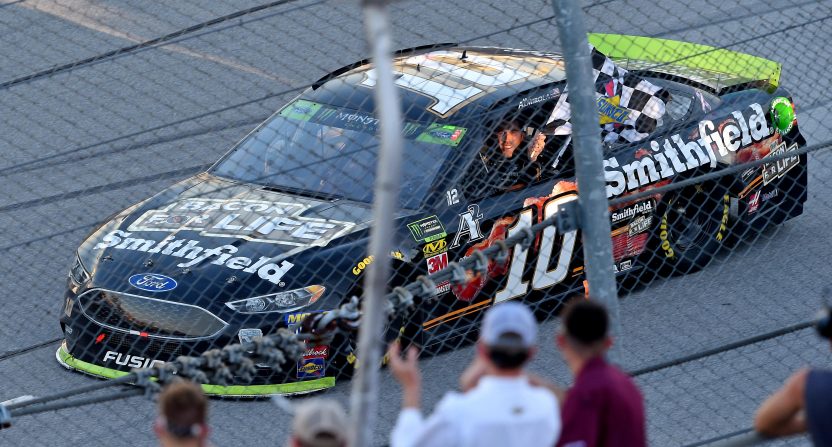 Throughout his career, Almirola has seen a kind of unique adversity not many other drivers have faced. His first NASCAR “win” happened when Denny Hamlin crossed the finish line, and his first Cup win was rain-shortened so people still weren’t convinced as to what he could do. Then he broke his back in a crash and had to face a tough road to recovery. And then this season, with a new team, there was getting wrecked at the end of the Daytona 500 and crashing out of a potential win at Dover last week.

But throughout all that, Almirola believed in himself. And facing that adversity paid off because it resulted in Almirola winning at Talladega, moving himself in the Round of 8 in the NASCAR Playoffs. His first win in 149 races, Almirola became the class of the field, and showed everyone what he could do. Before the season started, Almirola told The Comeback he was confident that moving to Stewart-Haas Racing would be the shot in the arm for his career and that he was confident he could compete for wins in the Smithfield Ford.

“I feel confident [the team can compete for wins]. I feel confident that we’ll be in contention to win some races,” Almirola said in February. “We’re going to have good weekends, we’re going to have bad weekends just like everybody else. You know, I don’t … I would, I’d be fooling myself if I thought we’re just gonna come out the box and win every race, even though that’s what I wanna do, but we gotta go, I think we gotta go out and get a solid footing, and make sure that we’re running up front consistently and if we do that, we’ll put ourselves in a position to win races. I think that’s the most important thing for Johnny Klausmeier and myself, is just to establish a baseline and really understand where we’re at with speed and the cars and with calling the races, and all of those things, and then from that point we can really focus on trying to get better and going, trying to win races.”

Almirola did just that and he and Klausmeier almost pulled it off in their first race together. Almirola got through all the landmines of crashes and spinning cars, and found himself leading in the final lap of this year’s Daytona 500. While they weren’t exactly expecting to win right off the bat, the opportunity was there and Almirola went for it. Circumstances didn’t go his way as Austin Dillon got into him with less than a half lap to go to win instead.

Almirola handled the disappointment of the finish better than most people on the grid. Even being in that position might have been unthinkable nine months before. Last May, Almirola was caught up in a hard crash at Kansas Speedway and broke his back. Despite initial doubt about getting back in a race car, Almirola grew more and more confident with each week of physical therapy and learned to never take racing for granted because it could be taken away at any point.

“I had a little bit of doubt about getting back in the race car, maybe just for the first week after the injury in Kansas,” Almirola said. “I was certainly skeptical and nervous about how bad the injury was and what my recovery time would be and quite frankly if I would ever get back in a race car, but after that first week, things just slowly started to progress from there and by the third or fourth week of rehab and physical therapy, I started getting back to where I started feeling really good and seeing a lot of progress. Like, I was seeing the progress just happen so much more rapidly than it did in the first few weeks and so that just gave me a lot of confidence that if I continued down that path that I’d be able to get back in a race car in a timely fashion like my doctors said, and then once my doctors gave me the clearance I have full confidence and trust in my doctors that they have my best interest, on top of mine, so they made it very clear that they weren’t going to let me get back in a race car if they felt like I was in danger, in more danger, than I was if I was completely healthy.”

“It was awesome [getting back in a race car]. You don’t realize how much you love something until you get it taken away from ya. You know, I think that’s why you see kids cry when they get candy taken away from ’em. I think, same for me, I was sitting there, doing my thing driving a race car, kind of got used to it, normal, got in the routine, and then all of a sudden in the blink of an eye, it gets taken away from you. It certainly makes you appreciate it a whole lot more.”

Maybe that kind of outlook let him not sweat the small stuff after Daytona. Sure, it hurt to be that close to victory, but the great thing about NASCAR is that you have 36 chances to get into victory lane each year and next week is another race.

That’s surely what happened to Almirola before his Talladega win. Almirola led 64 laps and was well on his way to victory until teammate Clint Bowyer crashed. That wound up being the second time that Bowyer unintentionally cost Almirola a potential win. In July, Bowyer crashed late at New Hampshire and Almirola fell back to third at the finish. At Dover, Almirola had the lead with a few laps to go and pit, putting him behind those who didn’t pit or took two tires. As he tried to claw his way back to the front, Almirola struck the Turn 2 wall, hit Brad Keselowski, and chaos ensued.

Despite under pressure to essentially be in a must-win situation to go into the Round of 8, Almirola didn’t seem concerned. Stewart-Haas Racing worked as a team and they sure did that, being a four-car group that was up front for almost the entire race. A part of SHR’s success has been their teamwork and even when Almirola hadn’t completed a race when he made these comments, he was fully aware how SHR operated in a “team first” mentality.

“It’s a huge jump [going from a single car team to four cars]. I mean, just the sheer resources and manpower alone … I mean, I think Stewart-Haas Racing has proved over the years, I think this is their 10th anniversary this year, and so the championships and the race wins, well, all of that has come from people and technology,” Almirola said. “And when you walk in their shop you see it first hand. And so for me that’s been the biggest eye opener, is just the sheer manpower with 380 employees and the amount of resources and technology that they have at their fingertips.”

“[It’s] so far so good [working with teammates]. It’s been great to get to know Kevin and Clint and Kurt. We’re still, you know, we’re still (laughs) not even to race one yet here, the Daytona 500, but we have had the chance to communicate and work together, and we’ve had a practice you know this past weekend, so … That’s been nice to start working with those guys and get to know them but I think as we get going in the season and get to Atlanta and Vegas and Phoenix and California, and kind of get through that first West Coast link, we’ll get in a lot better rhythm and I’ll understand sort of their driving style and I’ll be able to lean on them a lot more at those racetracks.”

Almirola now heads to the track that was the site where he broke his back. But he, along with Chase Elliott, has no pressure because he’s in the Round of 8. But if you were going to count out Almirola, do so at your own peril. Aside from the Roval (which was an anomoly) and Dover (which he would have won or at worst, finish top five), Almirola has finished no worse than sixth in the Playoffs. Stewart-Haas Racing is one of the best teams in NASCAR right now and with Almirola’s win, they’re the first four-car team to have all their drivers win since Joe Gibbs Racing did it in 2016.

Almirola is peaking at the right time, and honestly, why shouldn’t Almirola be considered as a championship contender at Homestead? He has just as much of a chance as everyone else. Almirola has had decent finishes at the Round of 8 tracks and he’s running well enough to be fifth of the 12 drivers in this round. The NASCAR Playoffs is set up where if a driver finds the right moment to strike, any one of the 16 playoff drivers could win the championship. Even though the start of the season may have ended up disappointing for Aric Almirola, it may end with him hoisting the trophy at the end of the season. Almirola certainly believes in himself that he can do it, and Homestead may be the ultimate end to what has already been a career year.