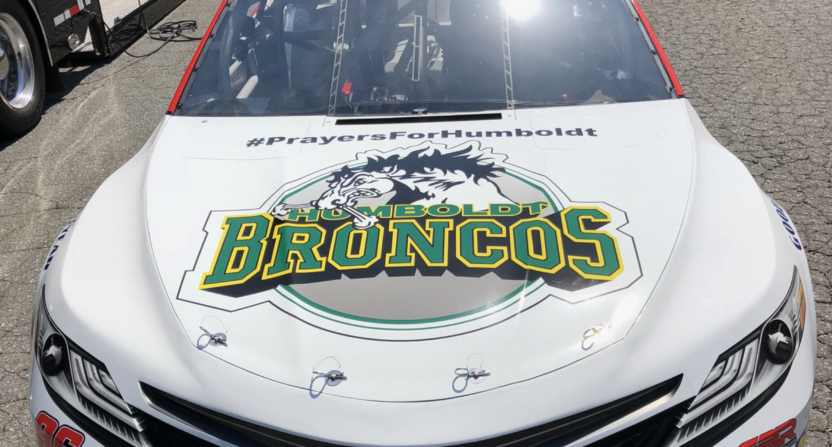 The sports world has rallied around the Homboldt Broncos Junior Hockey team for the past week. Last Friday, their team bus collided with a semi-truck and resulted in 16 deaths and 13 injuries. The crash has impacted many within Canada and the United States and people have been paying tribute.

Canadian NASCAR driver D.J. Kennington is paying tribute to the Homboldt Broncos by putting their logo on his #96 Toyota at Bristol Motor Speedway this weekend. Kennington is racing for Gaunt Brothers Racing, who revealed the car design.

.@DJKRacing will return to the seat of the No. 96 GBR Toyota Camry this weekend @BMSupdates, making his first career NASCAR Cup Series start on the half-mile track. Kennington has three prior starts at Bristol in the @NASCAR_Xfinity Series with a best finish of 29th in 2008. pic.twitter.com/dGr06ZaO97

The team is also raising money for the Broncos and tweeted an address for people to make those donations.

If you would like to make a donation to the team, visit one of the Conexus Credit Union branch locations, or mail a check or money order payable to Humboldt Broncos to:

The 40-year-old Kennington has been a star in the Pinty’s Series, which is the top NASCAR racing series in Canada. For the past seven years, Kennnington has occasionally raced with some of the smaller, lower funded teams in the U.S. NASCAR series trying to catch his big break. Kennington finished a career best 24th place at this year’s Daytona 500.

This will be Kennington’s first Monster Energy NASCAR Cup Series race at Bristol as the team operates on a limited budget this season. While Kennington may not be contending for the win this weekend, he’ll be a winner in our hearts by doing what he can to help those grieving this weekend.