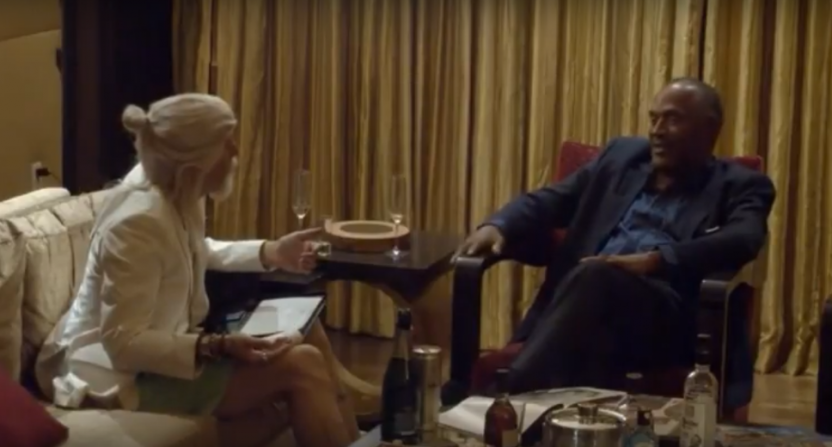 Comedian Sacha Baron Cohen’s Showtime series Who Is America? has seen plenty of bizarre hidden-camera interviews of politicians and celebrities,  but one of the strangest came in Sunday’s finale with Baron Cohen’s interview with O.J. Simpson. Playing an Italian playboy named Gio Monaldo, Baron Cohen repeatedly tried to get Simpson to admit to the 1994 murders of his ex-wife Nicole Brown Simpson and her friend Ron Goldman. Here’s the clip:

Between explaining who Simpson is to his girlfriend with “stab, stab, stab!”, talking about how he wants to kill his girlfriend in a bungee-jumping accident (leading to Simpson contributing “cord extra long”), and telling Simpson he has a business partner who wants to hear the real story of “that night with the wife…the one you shot,” Baron Cohen really goes in on trying to get Simpson to confess here. But Simpson doesn’t particularly do that, mostly laughing and saying “Stop!”, and responding to the question about “that night” with “Well, first of all, she wasn’t my wife. We had been divorced. And second of all, I didn’t do it. … I didn’t ‘get away’ with nothing.” Also, Baron Cohen says “Me and you, we got something in common. We both, how you say, ‘ladykillers,’” at one point, and Simpson replies “No, I didn’t kill nobody” while laughing.

Well, that’s certainly some uncomfortable television, but it doesn’t seem terribly likely to change anyone’s mind one way or the other on Simpson. And given that Baron Cohen reportedly paid Simpson $20,000 for this interview (which explains why Simpson just didn’t end it), it’s worth wondering if this was really the best use of anyone’s time or money. Especially considering the criticism this drew from the families of the victims when news of it first came out, with Nicole Brown’s sister Tanya having particularly strong words:

“Nicole and Ron are two human beings who were brutally murdered. This is not a joke nor is it entertainment. If Sacha makes this a comedic effort his victims will be personified as a joke. Shame on him.”

Whether it’s worth diving into the O.J. saga yet again and paying him to do so is up for debate, as are many of the things Baron Cohen did over Who Is America?‘s run (and many of the things he’s done over his wider career). It sounds like there won’t be any more of this particular show, though; despite Showtime president David Nevins’ previous comments that he was “dying to bring [the show] back, Baron Cohen tweeted Sunday that the finale was the “last EVER show of Who Is America.” We’ll see what project he moves on to next, but he’ll have a hard act to follow in terms of uncomfortable interviews after this one.

2 thoughts on “Sacha Baron Cohen’s “Who Is America?” wraps up with a remarkably uncomfortable interview with O.J. Simpson”