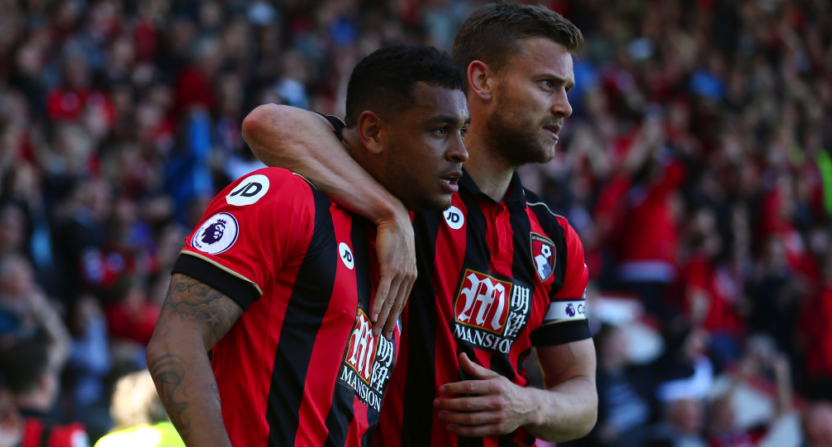 When AFC Bournemouth heads to King Power Stadium for its season finale against Leicester City, it would appear to be just another matchup at the end of the Premier League season. Neither club can qualify for the UEFA Champions League (top four) or the UEFA Europa League (as far down as seventh). The Cherries currently sit tied for ninth with 45 points. Leicester City, the 2016 champions, are right behind them in 11th with 43 points.

Bournemouth can finish as high as eighth, which may not sound all that impressive until you consider what it’s taken for the club to get here.

Less than a decade ago, club debts forced AFC Bournemouth into administration, which also carried a 10-point penalty in the standings. The Cherries were relegated from League One, down to League Two for the 2008-09 season. Despite having 17 points deducted that following season, they barely stayed above the relegation line.

And then, the turnaround started.

Young, energetic manger Eddie Howe helped the team steer clear of relegation in 2009, then had them promoted to League One in 2010. In 2011, Bournemouth narrowly missed out on a spot in the Championship, and Howe briefly moved on to Burnley. The club dropped to the middle of the table without him, and he was back by the following season.

The momentum continued immediately, with the Cherries promoted after finishing second in League One. Then, after a 10th place finish in the Championship, they won the whole thing in their second year. For the first time in club history, Bournemouth was in the Premier League — just six years after dropping down to League Two due to financial troubles.

Now, in year two of their Premier League stay, Howe and Bournemouth seem to be following a similar script.

The team’s attacking style made them a darling of the Championship, but the idea that it would work as well at the Premier League level seemed absurd. Goals are great, of course. But the club lacked the defensive abilities to stop opponents from scoring at similar rates of speed. Up against world-class clubs like Chelsea, Manchester City and the rest of the PL’s top sides, speed and attacking wasn’t supposed to be enough.

It still isn’t, but they’ve already made more progress than you’d have imagined just a couple years back.

Bournemouth out-scored nearly half the league in 2016, with 45 goals for versus 67 allowed. This year’s output shows the gap closing — it’s 54 for and 66 against with a match to go. The total allowed is among the worst figures in the Premier League, but it comes with the territory of using pace as a weapon. Just six teams have scored more goals than the Cherries this season.

Striker Joshua King’s been part of that effort to continue an attacking and frenetic style. Since coming over from Blackburn Rovers in the summer of 2015, the Norwegian’s logged 23 goals in 67 appearances (including 16 this season).

The rest of the team’s glut of goals come from a whole lot more ball sharing. Four other players — Junior Stanislas, Benik Afobe, Callum Wilson and Charlie Daniels — have scored between four and six goals apiece this year. Daniels is the only one older than 27. Daniels, the lone 30-year old, is the only player to be with the club for more than three years (he’s been with AFC Bournemouth since 2011).

Like their manager Howe, the team is young and mimicking him, they’ve also become cohesive within the club. Howe was a former player for Bournemouth (for nearly all of his career), and has spent all but one year as a professional manager with the club. While many of the faces on the Cherries’ roster may look new in relative terms, this is a team that’s also tried to settle into an identity with dependable, constant pieces at the top of the lineup card. They spent a ton on inbound transfers in 2016 (€63.3 million), but also recouped a bit of that with €19.7 million in outgoing contracts.

That early tumult within the roster wasn’t spent on a bunch of established stars and big-ticket draws, however. Much of it was expended on team-building for future youth. The trap for any club’s second year in the top tier is the assumed need to spend to stay up. To an extent, perhaps Bournemouth’s done that. But not by compromising their style of play. Rather, they’ve used acquisitions to help build a more talented, young core around Howe’s clear vision.

AFC Bournemouth still has plenty of room to grow into its newfound role in the Premier League’s crowded middle. Following a strong effort in 2016-17, there will undoubtedly be pressure for the club to try and jump up into an even higher tier, and set their sights on European competition next. You’re already seeing it with drives to sign players like Jermain Defoe, John Terry and the proposed “raid” of Chelsea’s Nathan Ake and Asmir Begovic to bring needed help on defense.

But given the way Howe has been staying the course with this strategy and a roster that’s starting to find some stability, the best move may be to change as little as possible. A young roster only gets better and more experienced. And the pitfalls of trying to jump from top-10 to top-six in the Premier League are numerous.

Look back a year and see that mid-tier clubs like Stoke City and Swansea City went from rising names to dangerously close to the cut line. Sunderland, once a mid-tier interloper in their own right, finished dead-last this year and faces relegation.

The mid-tier may not be the ideal place for any Premier League club. But if one can make it a home by way of an entertaining style of play and a promising roster, perhaps it’s AFC Bournemouth… if they can avoid the temptation of dreaming too big, too quickly.