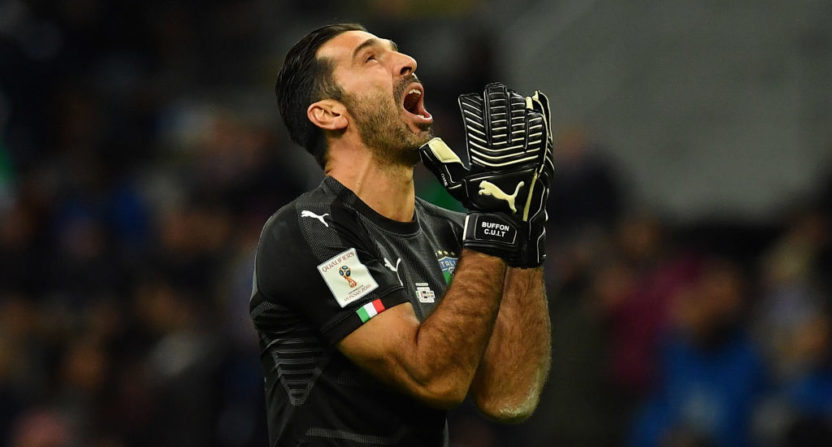 If the US not qualifying for the World Cup seemed improbable, then try wrapping your head around a World Cup without Italy. The four-time World Cup winners will not be at the World Cup for the first time since 1958 when only 16 teams qualified. In a World Cup qualifying cycle that saw the US, Netherlands, Chile, Ivory Coast and other notables fail to qualify, Italy is certainly the biggest shock of all. Where do they go from here to rebuild and get pack to their lofty perch atop the international game?

Since beating France on penalties to win the 2006 World Cup, the quality of Italian soccer has started to slowly deteriorate. Some of the brightest starts from the 90’s and early 2000’s like Baggio, Inzaghi, Maldini, Del Piero, Nesta and others have long since retired, and a few of the newer stars that took up their mantle like Pirlo, Totti and Buffon (now retired from international play) have now seen time called on their careers. Since then, Italy’s prodigious soccer pipeline has since dried up.

The country has not developed the kind of talent it used to and has been overly reliant on players like Buffon, Chiellini, Bonucci and Barzagli who are now all well on the wrong side of 30. Italy are now relying on players with promise but have not lived up to expectations, such as Lorenzo Insigne, who inexplicably didn’t play in either of the two legs against Sweden, Andrea Belloti, Antonio Candreva and even Brazilian born Jorginho, who have all not lived up to their expectations and developed the way so many expected them to, so when push came to shove, they couldn’t deliver.

And while not qualifying for the World Cup for the first time since 1958 is certainly a shock, the warning signs were becoming clearer and clearer. Two consecutive group stage exits in 2010 and 2014 were certainly not encouraging, and the underlying worries were masked by mildly better than expected performances in Euro 2012 and 2016, only to be undone by a lack of quality in their games against Spain and then Germany in the two tournaments.

As the quality on the pitch declined, so too has the quality in the dugout. Outside of Antonio Conte, none of Donadoni, Lippi, Prandelli and Ventura have done enough to change the way Italy play to get the best out of a generation of players that are not quite what Italy is accustomed to developing. And Ventura’s teams regressed dramatically after he took over, with a string of unnervingly poor results that culminated in getting stymied by Sweden.

Now Italy, like so many other normal World Cup mainstays along with them, must rebuild from the ground up. And there are plenty of places in which repairs to a creaking foundation are desperately needed.

Change starts with managers, and Italy have never hired a foreign manager in their history. It’s doubtful Italy turn once again to Conte, but he may be the best option available in terms of homegrown managers. Massimilliano Allegri at Juventus, Luciano Spaellti at Inter, Maurizio Sarri at Napoli and Eusebio Di Francesco at Roma are the best managers in Serie A at present, and have helped contribute to Serie A becoming a more competitive league in recent years. Any one of these choices could bring back some glory to the Azzuri and would be an improvement on what Ventura brought in this World Cup cycle, but would it help Italy bring through a younger generation that needs to take over the mantle for this team?

Player development is also a major issue at most Italian clubs. Their academies have not developed the kind of talent they used to, nor do many of them have the resources needed to develop players at a high level and compete financially with clubs in Spain and England. Outside of Gigi Donnarumma, there aren’t any outstanding prospects at youth levels that can come in right away to help change the narrative for the Azzurri, and transition the team to a new and younger generation.

Part of the problems also lie in Serie A, and until this year, the competitiveness of the league. Juventus has been so dominant in this decade thanks largely to a collapse of the Milan clubs that it has been almost impossible for other clubs in Italy to compete. Napoli and Roma have tried in vain, and only now have cracks in Juve’s foundations started to show. But even then, the financial heft of these clubs cannot match what clubs in England and Spain can muster, leaving youth development relatively underfunded. When Italy were a dominant team in the international game, Serie A was the premier league in Europe where the best soccer was played and the best players went. That’s not so much the case any more, and there are more than a number of fundamental changes to the structure of clubs and the game in Italy that may need to change if Serie A is to rise again.

It will be a long process to build back for Italy to recapture old glories. It starts in the dugout, but the rot has set in from the federation, to the clubs and the youth level, as it has in the United States, Holland and other countries who will be watching the World Cup from home and not in Russia. There are some reasons for hope, but when a catastrophic failure like this occurs, it often does some long lasting and deep damage.

A World Cup without Italy is not something many ever thought they’d see, but is now a frightening reality. To fix the longstanding and underlying issues before Euro 2020, there needs to be a massive overhaul in Italian soccer that has been long overdue, yet the powers at be did not want to bring to the forefront.

Sure there were numerous officiating controversies that VAR may have solved, some of which could have saved Italy from themselves. But now they must think long and hard about walking the long road back to a place they have owned in international football: a place among the elite. They are farther away from that now than they have ever been.