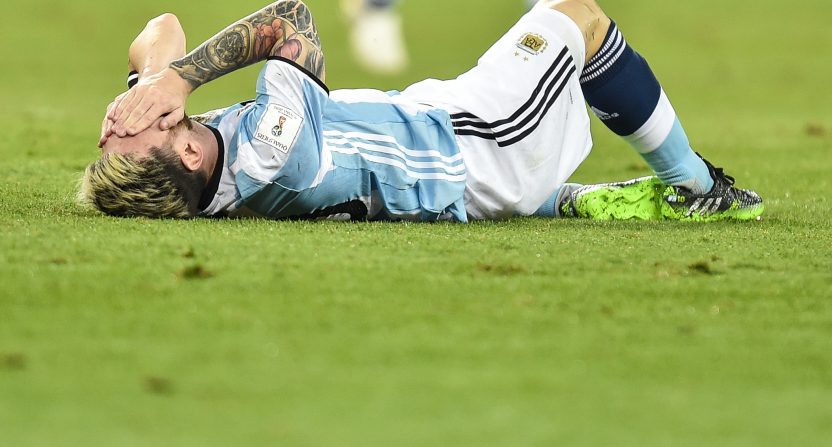 There was a time where it would be insane to think Argentina wouldn’t qualify for the 2018 FIFA World Cup. Even though they still are likely to qualify, it’s now gotten a bit tougher.

Lionel Messi has been suspended for four World Cup Qualifying matches by FIFA for “directing insulting words at an assistant referee.” It’s not known what Messi actually said but it was apparently serious enough to warrant a suspension, although it wasn’t worth sending Messi off at the time.

FIFA made sure to announce this today so Messi could start serving his suspension as soon as possible. Argentina plays Bolivia Tuesday night and would not come back until Argentina’s final qualifier against Ecuador on October 10.

Argentina is currently 3rd in CONMEBOL World Cup Qualifying with just five matches left for the ten countries. The top four countries qualify for the World Cup while 5th advance to play the top team in Oceania (likely New Zealand) in a home-and-away series for the final spot.

The middle of the CONMEBOL table is packed. Brazil is running away with qualification but 2nd to 6th is separated by three points and within Uruguay, Argentina, Colombia, Ecuador and Chile, all within three points of each other, one of them is guaranteed to not qualify.

Looking at Argentina’s schedule, if Messi were to get suspended, this would be the best time. Messi is set to miss Bolivia (FIFA Ranking of 97), Uruguay (9), Venezuela (59) and Peru (18). Only Uruguay, 2nd in qualifying, is within that range of realistically qualifying. Bolivia and Venezuela are just about eliminated and Peru need to probably win out for them to have a chance.

And looking at their competition, everyone but Uruguay and Argentina is facing Brazil and Argentina has by far the easiest schedule the rest of the way. Even though Argentina struggles to get results without Lionel Messi, I would say Argentina could scrape enough points to survive that worst case scenario, he comes back for a must-win final game against Ecuador.

It’s like a group of people trying to run away from a bear. Argentina doesn’t need to be the best, they just need to not be slowest. I’m pretty sure Argentina can do that.