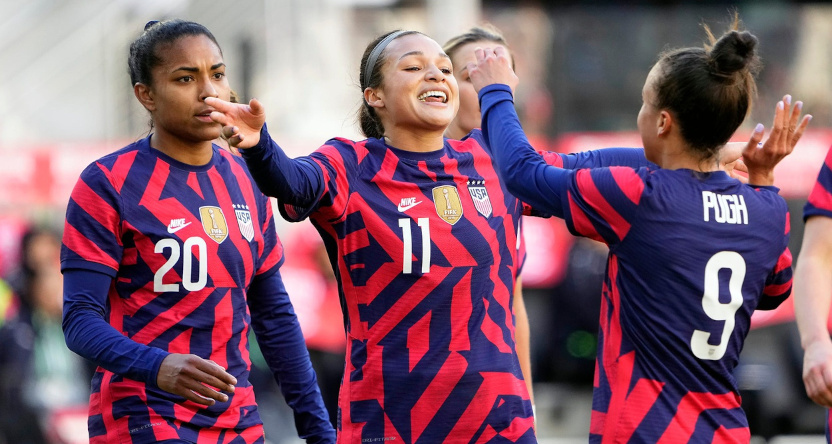 The United States’ women’s national soccer team (seen above during an April 9 friendly against Uzbekistan) has long fought for pay equality with the men’s national team, and after a lot of initial pushback from the United States Soccer Federation, they’ve now achieved that. In February, the sides settled the lawsuit brought by women’s team players for a total of $24 million (following an April 2021 agreement on working conditions), but those settlements were contingent on players ratifying a new collective bargaining agreement. That happened Wednesday, and as Meg Linehan and Sam Stejskal write at The Athletic, the women’s and men’s teams have now both agreed to CBAs (through Dec. 31, 2028) with equal rates of pay:

“One-hundred percent, it embodies One Nation, One Team,” USWNT forward Midge Purce told The Athletic during a Zoom call with USMNT center back Walker Zimmerman and U.S. Soccer president Cindy Parlow Cone. “We’re intrinsically tied now (with the men’s national team). When they score, we’ll cheer just a little bit harder. We did before, but we’re excited about it — we want a doubleheader. We’re opening doors for a new look of what football is in America.”

Equal pay is, of course, the major and deserved headline with Wednesday’s news. The three sides have agreed that the compensation negotiated with the two new CBAs is not just equal pay, but equal pay with equal rates of pay (rather than comparing total compensation, regardless of imbalances of matches played).

The details in that article are quite interesting, as this involves not just pay from U.S. Soccer sources (tickets sold, commercial revenue share, pay for days in camp and games played), but also from FIFA World Cup prize money. Those are not equal on the FIFA side; Stejskal and Linehan note that the U.S. women would only generate a $7 million FIFA bonus from winning the 2023 Women’s World Cup in Australia and New Zealand, while the men would generate a $13 million bonus for just reaching the Round of 16 at the 2022 World Cup in Qatar this fall. But for those tournaments, under this agreement, both of those prize pools would go to U.S. Soccer, which would then distribute 90 percent of it equally between those teams. That will then change to 20 percent to U.S. Soccer and 80 percent split between the teams for the men’s and women’s World Cups in 2026 and 2027 respectively.

This does mean that the U.S. women are moving away from guaranteed contracts, and to the pay-per-play model seen on the men’s side. So there’s some risk there. But there will still be opportunities for some women’s players to receive benefits (insurance, parental leave and short-term disability) through the federation under an additional work structure, and the improvements to NWSL compensation under that league’s new and first-ever CBA should also help equalize things there. And there’s also going to be more money coming in for both teams with the federation agreeing to share some revenue from their broadcast (including with Turner) and sponsorship (including with Nike) deals. The most crucial thing here is that the women will now be compensated under the same formula as the men, though, a demand that was at the core of much of their fight. So this is a big moment for the USWNT and U.S. Soccer.