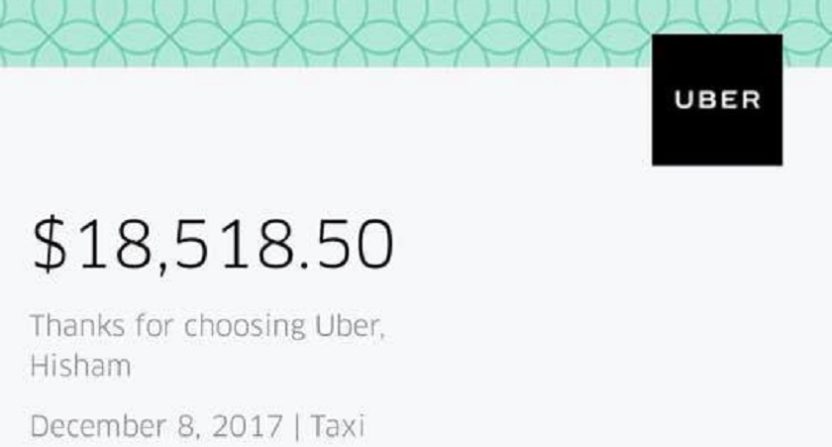 Uber is having a rough year, what with the tales of harassment and the corporate shakeups and the most recent “paying a 20-year-old hacker $100,000 to destroy the stolen personal information of 57 million customers before it leaked” situation.

If Uber was hoping to end the year on a more positive note, a story like this one probably won’t help: a rider in Toronto claims he was charged more than $18,000 for a short trip.

The trip reportedly occurred in Toronto, and was shared by Instagram user votethehish, whose account is private. Emily Kennard (@emilykennard) shared a screenshot on Twitter of the ride in question, and the almost unbelievable billing result:

My friend was charged 18K for a 20 Min ride (!), and they are sticking to it. What in the world??? This is insane! @Uber_Support @badassboz @Uber pic.twitter.com/RjFihVLKIC

The trip in question, from 12a Widmer St. to 30 The Queensway, is only about five miles in total, and according to an estimate via Uber’s official tool, as of this afternoon an UberX ride for that route would be projected to cost $12-$16.

Surge pricing that increases cost 1000x would seem to be a very poor business model for, well, anything. For Uber, forcing customers to play a lottery wherein they might end up on the hook for a charge in excess of what it would cost to just buy a car and make the trip themselves seems especially ridiculous.

Kennard vouched for the authenticity of the claim, and also noted that as of now, Uber was sticking with the disputed fare:

It is. He disputed and they aren't backing down.

This sort of thing has happened before, but typically Uber will refund customers, and has even done so for surge pricing that the rider maybe should have been aware of. This one is harder to understand.

We reached out to Uber for comment, but have not received a reply. This post will be updated if Uber does respond.

An Uber spokeswoman confirmed this did happen, but says the company has issued a full refund.

“There was a an error and we have provided a full refund. We sincerely apologize to this rider for his experience.
“We have safeguards in place to help prevent something like this from happening and we are working to understand how this occurred.”

Dolloite’s employee, Gurgyan Singh Kaley, who was working as an accountant has tricked his bosses with fake Uber receipts was caught. He has made more than 1000 bogus rides and the stolen money amount was about £90000. This happened because Kaley used to play at European gambling sites accepting British bettors and was gambling-addicted. Because of his actions, he will have got 2 years prison term and will be charged for £75000.