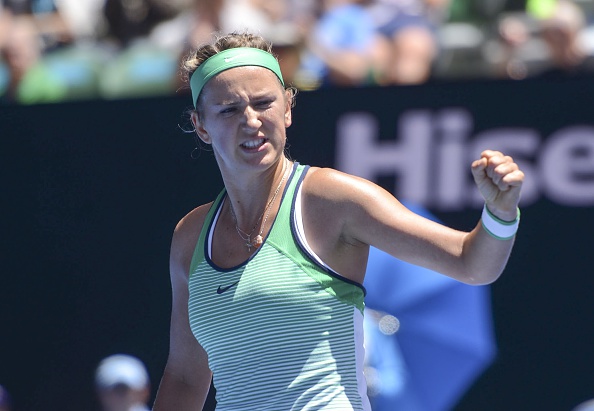 Saturday’s action at the Australian Open was dwarfed by the off-court happenings, as the tennis took a backseat to the health status of Nigel Sears, who is Ana Ivanovic’s coach and Andy Murray’s father-in-law.

Even the relatively entertaining final hour of Ivanovic’s third-round match with Madison Keys felt hollow in comparison to the regrettable drama that played out in the stands, where Sears collapsed before being rushed to a hospital.

Andy Murray's father-in-law is being treated in hospital after collapsing at the Aus Open.https://t.co/s2l0lzzjcA pic.twitter.com/pwrht6k5VU

For weary-eyed viewers in America due to the delirious early-morning hours, the Australian Open swiveled quickly from relative monotony to Twilight-Zone surreality on Saturday… but just in that instance.

Removed from that unwelcome moment of drama, there wasn’t a lot of suspense in terms of match play on Saturday in Melbourne Park.

This was the calm before the expected chaos of the final week. Twelve of 16 matches were decided in straight sets, with only one women’s match lasting three sets and no men’s matches reaching a fifth. It was a day mostly for chalk, especially on the men’s side, setting up a delicious round of 16 and beyond. Fourteen of the top 16 men’s seeds remain, and Andrey Kuznetsov (who beat Jeremy Chardy on Thursday) is the lone unranked player remaining after a spirited four-set win over Dudi Sela.

The only major shakeup came on the women’s side, where No. 3 seed Garbine Muguruza was the latest upset victim. The Spaniard fell in straight sets, 6-3 6-2, to Barbora Strycova in an afternoon match Down Under. It’s an especially disappointing defeat for Muguruza, who had a clear path deep into the final week thanks to the run of upsets in the women’s draw.

BIG Upset: @GarbiMuguruza has been downed by Barbora Strycova 6-3 6-2 in @AustralianOpen 3rd round! #AusOpen pic.twitter.com/M4pKChQVbR

The 22-year-old Muguruza committed 32 unforced errors and dropped her serve four times in the loss. Credit Strycova for controlling the pace, winning 74 percent of her first-serve points, all five points at the net, and all four break point opportunities. It was a shockingly lethargic performance for Muguruza, who seemed to hold so much promise after making the Wimbledon final last summer and breaking into the top five of the world rankings.

With her form at the end of 2015, Muguruza gave us hope that inexplicable performances like this would be a thing of the past. Alas.

Instead of a fourth-round showdown between sure title contenders, it’s Strycova who will face Victoria Azarenka in the round of 16. Azarenka is increasingly the favorite in the draw’s bottom half following a complete dispatching of Naomi Osaka, 6-1 6-1, on Saturday. Azarenka has thoroughly dominated in Melbourne during the first week of the tournament, breaking her opponent’s serve 17 times in three matches while dropping serve only once.

As you can see, it’s a clear bounceback Grand Slam tournament for the former World No. 1. From Wimbledon 2011 through the 2013 U.S. Open, Azarenka made the semifinals or better in seven out of 10 Slam events, including a pair of Australian Open titles and two hardcourt finals at Flushing Meadows. A nagging foot injury slowed her momentum the past couple seasons, but she was finally showing signs of life in a quarterfinal run in last September’s U.S. Open.

She’s clearly parlayed that health into more momentum in 2016.

Victoria #Azarenka marches into the 4th round of the #AusOpen https://t.co/wD52WgSUEs

Azarenka has looked every bit like the Grand Slam champion she is and a viable challenger to, say, Serena Williams or Maria Sharapova on hardcourts. Considering the messy nature of the WTA draw, it might be shocking at this point if she doesn’t reach the finals. If Azarenka accomplishes that, she’ll move back into the top 10.

Elsewhere on the women’s side, No. 7 seed Angelique Kerber might be the only hindrance in Azarenka’s path. Kerber handled American Madison Brengle in a breezy straight-set victory. China’s Zhang Shuai might be the best story of this tournament to date, as she reached the fourth round by cruising past Varvara Lepchenko in straight sets. Zhang had never won a main-draw Grand Slam match before this tournament, and now she’s among the final 16 players left.

No. 21 seed Ekaterina Makarova continues to affirm her Australian Open excellence, as she knocked off ninth-seeded Karolina Pliskova, 6-3 6-2, in Margaret Court Arena. Makarova has become a fixture in the round of 16 Down Under.

The men’s half was almost impossibly quiet Saturday, but that’s the way this tournament has unfolded throughout all three rounds. It might as well be the inverse of the unpredictable WTA proceedings, with all the favorites still kicking.

No. 8 seed David Ferrer keeps rolling, and he’s an intriguing option to unseat Andy Murray in a possible quarterfinal after a strong three-set romp over No. 31 seed Steve Johnson. Johnson’s loss means John Isner is the lone American left in the men’s draw. Isner broke through in a second-set tiebreak following a first-set tiebreak loss to Feliciano Lopez, eventually claiming the match in four sets. He also smashed his racquet, for good measure.

Speaking of Wawrinka, he advanced to the second week with a three-set win against Lukas Rosol. Wawrinka dominated early but played a bit of a shaky third set, needing a tiebreaker to close out the match. The 2014 Aussie Open champ will face Milos Raonic next, since Raonic thoroughly handled Serbia’s Victor Troicki in straight sets. Andy Murray bested Joao Sousa in four sets while the scary scene with his father-in-law unfolded, unbeknownst to him, on another court.

One of the few seeds outside the top 16 to reach the fourth round, No. 23 Gael Monfils, advanced courtesy of a straight-set thriller over fellow Frenchmen Stephane Robert. The duo clearly have a rapport on court, because the tennis was entertaining even though the match was not particularly close. Monfils toughed out a close first set, despite an incredible rally that Robert won with a flat backhand on the line.

The two friends weren’t done just yet. Robert jumped out to a 3-0, double-break lead in the second set. Monfils fought back with his own three-game winning streak, which leads us to the…

SHOT(S) OF THE DAY

Seriously, can we get these two together for an exhibition series?

Outside of the Frenchmen’s flair, it wasn’t the most compelling day of tennis. What day six Down Under did accomplish: setting the foundation for a dramatic and consequential second week at the season’s first Grand Slam tournament.