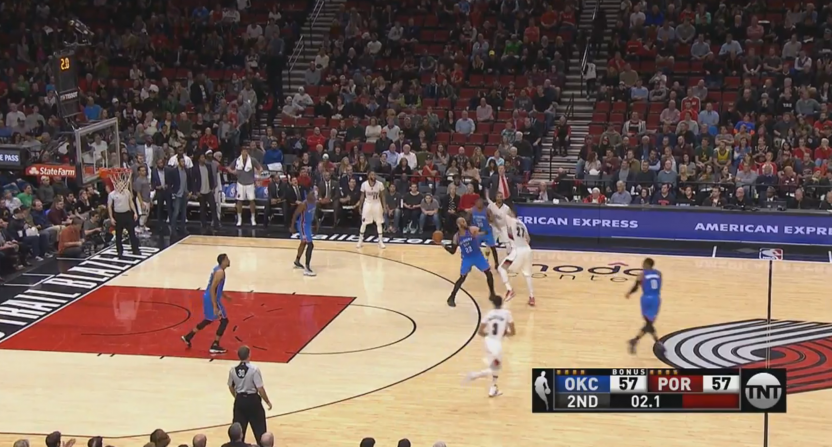 While you may have been sleeping, the New York Jets got pretty serious about rebuilding, while the Golden State Warriors had more trouble coping without Kevin Durant than many of us thought they would. Plus, Taj Gibson hit one of the wildest shots we’ll see this NBA season.

Hello and welcome to The Cheat Sheet.

The Jets are now totally all-in on that rebuild

Earlier this week, the New York Jets released big-name veterans: cornerback and Darrelle Revis and center Nick Mangold. Despite that, coach Todd Bowles insisted Thursday that the team was not rebuilding.

Then, only hours after Bowles’ proclamation, the Jets cut ties with another former Pro Bowler, receiver Brandon Marshall, signaling that the rebuild is very much on.

General manager Mike Maccagnan’s decision to jettison Revis, Mangold and Marshall, plus Breno Giacomini and Nick Folk signals that the Jets are going all-out with this rebuild. Cutting those five players following a 5-11 season reportedly clears $45 million in cap room New York to play with. We can assume they’ll look to get younger and perhaps to settle a shaky quarterback situation.

As for Marshall, he’s a casualty of the team’s course more than his own play. He caught 59 passes for 788 yards and three touchdowns last season for the Jets, in what was a bit of a down year for him but not bad considering who was throwing him the ball. Though he had some mild off-field issues, the Jets’ choice to move on without him likely owes to the fact he was set to become a free agent after next season and would have cost the team $7.5 million in a lost year. Regardless, he’s now looking for his fifth NFL team.

Since Kevin Durant got hurt Tuesday, sidelined with a knee injury that will cost him at least four weeks, there has been much debate over what his absence could mean for his Golden State team. Are the Warriors still the best team in the West? Could they beat the Cavs in the Finals without Durant? Will Steph Curry regain his MVP form with his teammate’s out?

Well the early returns are in, and they’re not great.

How bad was Thursday for the Warriors? It was Jerian-Grant-crossing-up-Steph-Curry bad.

So does this mean the Warriors are screwed without Durant? Of course not. But it does reinforce that they’re vulnerable and that anyone already penciling them in for the NBA Finals is probably under-estimating how competitive the league is. If Golden State can lose to the 31-30 Bulls, it can probably lose to the Spurs or Rockets come playoff time, especially if Durant isn’t good to go.

On the bright side, Curry passed Kobe Bryant for 11th place on the all-time 3-pointers list. Maybe that’s as good as a win?

– In other NBA news, the Trail Blazers beat the Thunder 114-109. Still this shot by Taj Gibson is probably what we’ll remember most from this game.

– Colin Kaepernick will reportedly stand for the national anthem next season.

– The Los Angeles Rams have some pretty sweet new uniforms.

– Cowboys owner/general manager Jerry Jones’ daughter does not trust him to use Twitter.

– Over on the ice, P.K. Subban had to hold back tears as he returned to Montreal for the first time as a member of the Predators.

– The Pittsburgh Penguins put some real-life Penguins on the ice during their game against the Flyers at Heinz Field, and PETA was not thrilled.

– MLB announced a series of rule changes meant to improve pace and shorten games, including automatic intentional walks and time limits on challenges.

– Oscars stage manager Gary Natoli criticized the accountants from Pricewaterhouse Coopers for their handling of the Moonlight-La La Land flub at the end of the show, saying, “They froze.” That seems like a fair assessment.

– Alec Baldwin is writing a memoir from the perspective of Donald Trump. What a world.

This dude hit a half-court shot to win a car, and Kevin Harlan offered a play-by-play call like only he can.