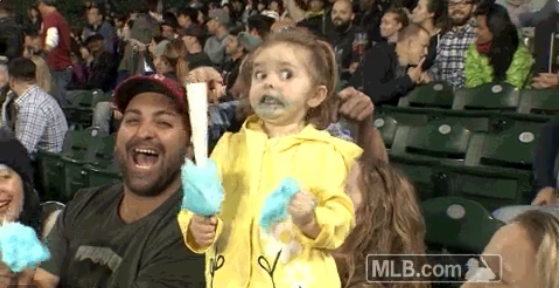 Okay, time to fire up the NFL Films soundtrack.

Pro football is back. (Yay.)

Stephen Strasburg may be done for the year. (Boo.)

Plus one of the greatest fan reaction gifs ever, thanks to a little girl who is hulking up on cotton candy.

The traditional NFL season opener features the defending Super Bowl champions, and if the schedule accommodates, a rematch of the Super Bowl itself. In this case, we get the Broncos hosting the Panthers at Mile High Stadium, though with a slightly less glamorous quarterback matchup.

Trevor Siemian will make his NFL debut, having beaten out Mark Sanchez and rookie Paxton Lynch for the right to take over for the retired Peyton Manning and the departed (well, just to Houston) Brock Osweiler. The first pass Siemian throws tonight will be the first pass he’s thrown in a regular season NFL game.

Cam Newton is back, of course, and both defenses should remain strong, but it’s quite possible the Broncos take a step back with Siemian. Though Peyton could barely throw the ball ten yards, he at the very least tended to put it in the right places. But the Panthers lost Josh Norman as well, so basically, who knows? We might be in for a low-scoring affair at altitude.

In any case, the NFL is back.

In his first game back off the DL, Stephen Strasburg walked off the mound in obvious discomfort, both physically and emotionally.

Strasburg leaves early. See the pitch that caused it and his final pitch. pic.twitter.com/kvb4F1YMb9

Hugely unfortunate for both Strasburg and the Nationals.

Stephen Strasburg "felt a pinch in the back of his elbow," according to #Nats manager Dusty Baker. MRI tomorrow. @MLB @MLBNetwork 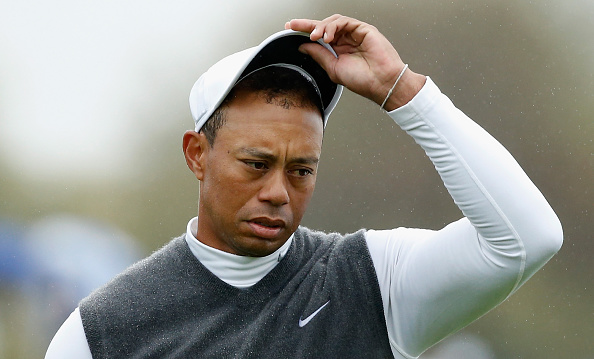 -Tiger Woods is going to play this year after all. He’ll make his return to the PGA Tour in October at the Safeway Open in Napa Valley.

-Colin Kaepernick will be donating 100% of his proceeds from jersey sales to charitable organizations.

-Speaking of tangential Kaepernick protest stories, Roger Goodell says he respects the protest, but doesn’t agree with his chosen method. (As always, Goodell comes across as misguided. He seemingly equates Kaepernick’s kneeling during the anthem as unpatriotic, which is a fairly restrictive view of patriotism.)

-And former USWNT star Megan Rapinoe had been joining in with Kaepernick’s stand during NWSL games, but last night the Washington Spirit pulled a fast one and played the anthem before the players were on the field, releasing an insulting statement in the meantime.

-There’s a new iPhone! And if you somehow missed it, the headphone jack is no more. As an aux-input devotee, who prefers non-Bluetooth music, I’d be upset if I didn’t just own an Android.  (Let’s not have that debate though, please.)

-Here’s another in my series of cool science gifs:

This is why you want to avoid fallen power lines.

That’s a great illustration of both the functional nature of electric currents AND how dangerous they can be. It just torches the grass when it charges the fence. That’s crazy.

-In shocking news, Tony La Russa is overly optimistic about the Diamondbacks chances next season.

-Some degenerates and/or Browns fans are taking Cleveland to win the Super Bowl, bless their hearts.

-Ever enter the wrong address on Google Maps and not realize it for a bit? Well, an AirAsia pilot pulled the professional version of that move, sending an airline flight in the wrong direction and essentially wrecking their navigational system. Whoops.

-Zeke Elliott feared a drug test, and might get in trouble for that. Like any recent college grad isn’t nervous about the drug test requirements of a new job.

-Drew Brees has a new deal.

-SVP thinks FS1 should worry about their own ratings.

-The MLS Cup Final is moving to primetime FOX.

-Soccer Twitter war! This time, it was USMNT midfielder Alejandro Bedoya taking on former USMNT striker Eric Wynalda, after Wynalda criticized Bedoya’s performances. Bedoya brought up the 1998 incident when John Harkes had an affair with Wynalda’s wife, which is probably a low blow, considering Wynalda was the victim there. Not sure why Bedoya is so sensitive to criticism.

Okay, this girl is about to just go OFF!

When you're plotting world domination but the sugar kicks in. pic.twitter.com/APbCEeYJbH

She looks more electrified than that swing set up above. That’s fantastic stuff.