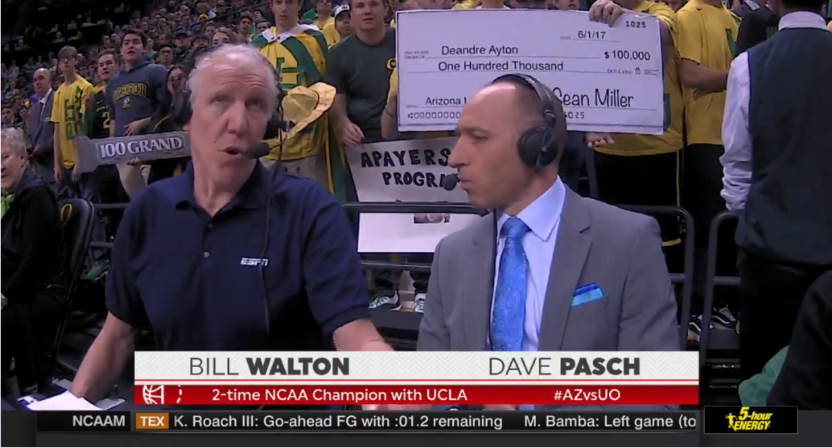 Oregon fans came very prepared with the $100,000 jokes for Arizona

By now, you’ve likely heard about the allegations involving Arizona that have head coach Sean Miller currently stepping away from the team (and he’ll likely being fired eventually).  But if you haven’t, the summary is that Miller was reportedly caught — by FBI wiretaps — having phone conversations in which he discussed paying star recruit Deandre Ayton $100,000 to commit to Arizona.

Well, while Miller didn’t coach the team on Saturday night, Arizona announced that Ayton will be eligible to play the rest of the season. And Oregon fans made sure to bring their best trolling efforts for the game, particularly with $100,000-mocking signage.

Ayton certainly didn’t let the mocking hurt his game that night; he went off for 28 points (11-15 FG, 6-6 FT) and 18 rebounds, and had this awesome poster dunk.

It certainly sucks to have a gold medal game decided by a shootout, but it ended up being pretty great. Jocelyne Lamoureux-Davidson had this insane goal for Team USA in the shootout:

And here was the gold medal-winning save from Maddie Rooney (she got an important Wikipedia update as well):

And the crazy shot from John Shuster:

BYU guard T.J. Haws yells at Portland crowd to ‘SHUT THE EFF UP!’