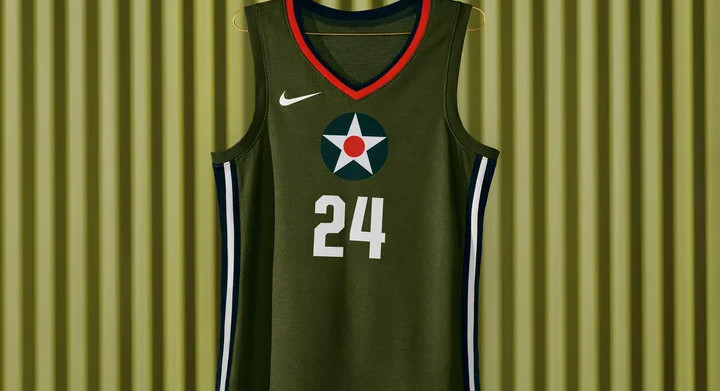 We’re at a moment where many institutions named after troubling people are having their names changed, such as this week’s renaming of Atlanta’s Forrest Hill Academy (named after Confederate general Nathan Bedford Forrest, the first grand wizard of the Ku Klux Klan) to honor Hank Aaron instead. A lot of those institutions have been around for a while, and likely wouldn’t have been given their old names today. But it’s particularly interesting to see a just-unveiled thing pulled over criticisms of the history of what it’s associated with, and to see a statement on that include “recently learned” in reference to something that happened 78 years ago. That’s what has now happened with the Dallas Wings’ new “Rebel” jerseys (seen above) honoring the Women Airforce Service Pilots.

The WASP corps was a 1943-44 U.S. civilian women’s pilots association (built of the combination of two earlier organizations Women’s Auxiliary Ferrying Squadron and the Women’s Flying Training Detachment) that tested aircraft, ferried aircraft, and trained other pilots during World War II, freeing up male pilots for combat roles. It was also an association that rejected every Black woman who applied. So that’s a curious organization for the Wings to spotlight. Megan McCluskey published an article at Time Friday on the backlash the Wings’ tribute to the WASPs had drawn, and then updated that article with this statement:

In an April 16 statement to TIME, Nike, the WNBA and the Wings, said they had made the joint decision to pull the Wings’ Rebel uniform: “The recently unveiled Dallas Wings Nike Rebel Edition uniform was designed to celebrate a group of Texas-based women pilots during World War II. However, Nike, the WNBA and the Dallas Wings recently learned the history of the program does not align with our shared values of diversity, equity and inclusion. As a result, the Dallas Wings will not wear this uniform on court, Nike and its partners are removing it from retail, and Nike and the Wings will work together on a new Nike Rebel Edition uniform design for the future.”

McCluskey’s piece has some good comments on why this particular organization was so problematic for a WNBA team to honor:

The outright rejection of Black women set WASP apart from other U.S. military services during this time, says Matthew F. Delmont, a history professor at Dartmouth College who specializes in African-American History and the history of Civil Rights. “What stands out about the WASPs is that they excluded Black women entirely,” he tells TIME. “While the rest of the military and auxiliary services were segregated, they at least allowed African Americans to participate.”

Although the creation of WASP was a landmark moment for women in the military, Delmont says that focusing solely on that narrative furthers the whitewashing of American history.

“What often isn’t talked about is the fact that even if white women were getting different and new opportunities, that almost always ran parallel with the maintenance or extension of racial discrimination and racial barriers,” he says. “To only talk about [white women’s side of the WASP] story and not also talk about the fact that Black women were denied that opportunity—even ones who were qualified and had commercial pilot’s licenses—misses the broader context. We can’t tell one story without telling the other.”

…“With all their resources, the Wings, the WNBA and Nike somehow collectively botched this,” says Jasmine Baker, a women’s sports culturalist who helped make people aware of the controversial design on social media. “One reason why I wanted to bring this to people’s attention was that for fans who were considering purchasing the jersey, this [decision] was obviously going to be questionable at best. I think a lot of people don’t know the thorough history behind this.”

Here are some of the tweets on that, from Baker and from former WNBA all-star Kelsey Bone:

People keep asking me why I hate the Wings rebel jersey so much.

Those of us who understand America’s history also understand how that impacted our armed forces.

I knew no one, especially within the Wings org, had done their homework about WASP.

Imagine making black women wear a jersey that celebrates an organization that wouldn’t allow black women in it.. Y’all have let that league play in your faces for a year… are y’all not tired?

This decision to pull the jerseys certainly will help to avoid the future criticism that would have popped up if players had actually worn these in games (the season is set to tip off on May 14). And the Wings, the WNBA and Nike can now work on coming up with a new “Rebel” design (each team has one, intended to honor female pioneers) that isn’t as offensive to as many people in and around the WNBA. But the “recently learned” in the statement stands out, especially as this was not a quickly-conceived plan; jerseys take quite a while to design, and this was signed off on by people with the Wings, with the league, and with Nike.

If those groups only “recently learned” of this, that brings into question just what research they did on the WASPs. Even the WASP Wikipedia page has a prominent section on the barring of Black women from the corps, including the quote of “Another African American applicant, Janet Harmon Bragg, was told by [WASP director Jacqueline] Cochran in her interview that “it was difficult enough fighting prejudice aimed at females without additionally battling race discrimination.” So this did not require detailed research in obscure journals; it was clear to anyone who took a brief look at the organization.

And while all sorts of segregationist practices took place in U.S. military and military-supporting civilian organizations in World War II (and before, and after), as Dartmouth College history professor Delmont noted to McCluskey, “What stands out about the WASPs is that they excluded Black women entirely.” That put them well above and beyond other military and civilian organizations, especially as Cochran successfully lobbied to be in charge of all female pilots supporting the U.S. war effort; there was nowhere else for qualified Black female pilots to go, and one, Mildred Hemmons Carter, who tried to join the Black Tuskegee Airmen after her rejection from the WASPs was rejected from the former group on the basis of her gender.

So that’s not a great organization for the Wings, the WNBA and Nike to spotlight. And while they’ve eventually landed on a better answer here, it’s unfortunate that they’re claiming they only “recently learned” of events that happened more than 75 years ago, which have received prominent coverage in discussions of this group. The “recently learned” suggests that everyone involved either didn’t do much research at all (a bad thing when highlighting historical entities, especially when doing so in a form you’re intending to use and sell!), or did look at this and didn’t think it would be a big deal. And neither of those approaches seems good.