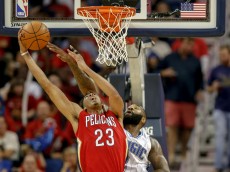 Dammmmmmnnnnn! As if Anthony Davis needed to prove he is deserving of the Defensive Player of the Year he came up with this huge block on Spurs’ Manu Ginobili during last night’s Pelicans win. While Manu was seemingly in the clear of the big man, and seemed to have a shot at the rim, AD […] 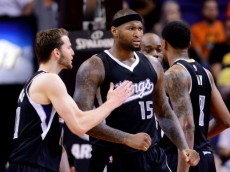 The Kings may need to waive “First Last Name” if he continues to have stat lines that contain baseball numbers. Seriously, doesn’t “First Last Name” even know he was in an NBA game and not an MLB game? How did he manage to have three RBIs on an NBA court is beyond me. Someone in the […] 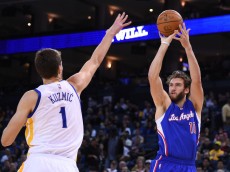 I don’t even know where to begin with this. Clippers forward Spencer Hawes showed just how much he was in the Christmas spirit by wearing what else… a Christmas suit complete with holiday colors, Christmas trees and pants that seemingly didn’t fit him. Can’t wait to see what he has in store for other upcoming […]

Longtime NBA sideline reporter Craig Sager is finally on the road to recovery after his long battle with leukemia and he is overwhelmed by the show of support.

Sager spoke with TNT’s Ernie Johnson on his battle with leukemia, including the first signs of something being wrong, how Spurs’ Gregg Popovich lent his support, Kevin Garnett’s support and his son’s willingness to save his father.

It’s a touching video enough for you to shed a tear or two.

Ok. Maybe more than two tears were shed during the watching of this fantastic video. 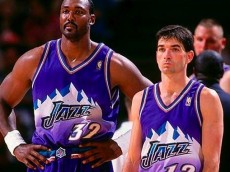 State Farm has done it again. They’ve given us the gift of a great commercial. They’ve been hinting at the NBA – National Bureau of Assists – for some time now and we now know who is part of the league. There’s “Darius” Lillard, “Summer” Byrd, “Sebastian” Curry, and “Don” Stockton to go along with […] 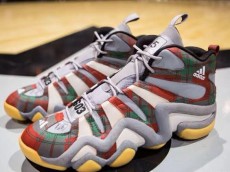 Leave it to the Spurs’ Matt Bonner to have custom Adidas shoes complete with plaid Christmas colors, the New Hampshire area code and have a look only fitting for the “Red Mamba.” Bonner will be wearing his custom Adidas Crazy 8’s kicks as the Spurs face the Thunder on Christmas Day, but what did it […] 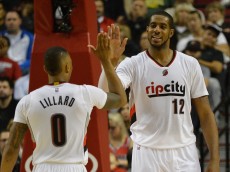 Last time I checked the Thunder play in Oklahoma City and and not in Texas. But then again, this TV announcer totally must have skipped Geography 101 in school. During the Blazers-Thunder game, Damian Lillard nailed a clutch three pointer to send the game into overtime. The Thunder TV announcer got so hyped he exclaimed […] 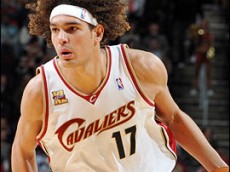 Cleveland Cavalier center Anderson Varejao is believed to be out for the rest of the season after suffering an Achilles tendon tear. The injury came in a 125-104 win over the Timberwolves when he landed awkwardly on his ankle and couldn’t put any weight on his left leg. An MRI Wednesday morning revealed the tear […] 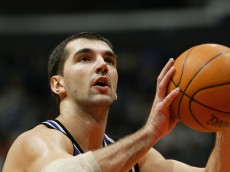 He still has it. Former NBA player Vlade Divac was in his old stomping grounds in L.A. for a chance to win big bucks for charity. All he had to do was nail a half court shot (something he wasn’t known for in his playing days) and $90,000 was in the bank. Half court? No […]

During last night’s Thunder-Blazers game, Blazers power forward LaMarcus Aldridge and Thunder forward Serge Ibaka got tangled up below the rim which resulted in the two grabbing and pulling on each other and getting tossed from the game.

There were no punches thrown but it goes to show you, the West is stacked and with teams jostling for postseason positioning, every game counts and tensions will be high.

At the very least, some fines will be handed down by the league office I would imagine.

Former Kings player Peja Stojokavic recently had his jersey retired by Sacramento after giving the Kings some of his best basketball during their glory days in the early 2000s.

It was a special night and Peja was able to speak with NBA Radio on Sirius XM about his jersey retirement and what it was like to play with the Kings.

From how much fun he had with the Kings, the instant chemistry the team had and much more, take a listen to what Peja had to say and congrats to No. 16. Well deserved.

Ouch! NBA legend and former Jazz guard John Stockton was a guest on NBA Radio on Sirius XM and pretty much called out the current state of the league as being soft. Stockton points out the fact the league doesn’t let NBA players play tough defense, that almost every touch is an automatic whistle, and […] 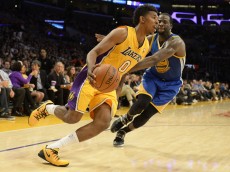 ‘Tis the season of giving and it would seem Iggy Azalea knows that real well. She got boyfriend and Laker guard Nick Young an incredible gift. She not only got him a car, but a 1962 Impala.   Yup. That happened. Here’s some other angles of the car: Feeling like Westside connection lol A photo […] 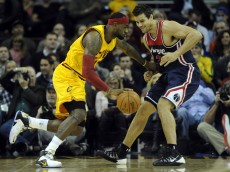 As the saying goes, he’s a chip off the old block. LeBron James may be the most dominant player in the NBA but his son, LeBron James Jr., might be following in his footsteps one day in the league. At just 10 years old, Jr. has shown court vision, handles, pinpoint passing and all out […] 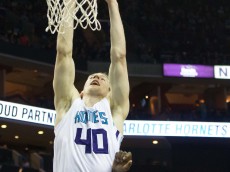 Usually it’s Kenneth Faried who puts opposing players on a poster, but this time he’s on the receiving end of a monster facial courtesy of Hornets forward Cody Zeller. Zeller was way out from the paint and had Faried one on one en route to the rim. Considering Zeller had the step on Faried, Zeller […]