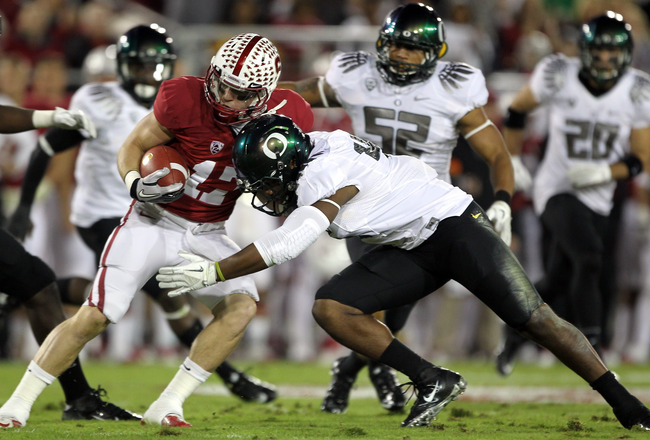 Stanford had so much to play for Saturday night.

A win would have given the Cardinal a reasonable path to the BCS Championship, and a defining victory for Andrew Luck’s Heisman campaign.

But what we got was an inspired performance from Oregon, and that may be what the Ducks needed to convince some that they deserve a rematch with LSU.

The Cardinal didn’t play with the same emotion as the Ducks, and it showed in the final result (53-30). It’s clear Stanford was not ready for the prime-time game, and they didn’t respond well to the challenge.

Oregon’s odds of playing in the BCS Championship are slim, but the Ducks are in the driver’s seat for a Pac-12 championship.

The difference was Oregon’s speed. Stanford’s defense is stout, but when Oregon’s LaMichael James and De’Anthony Thomas got loose it looked like they were in a different gear than any Cardinal.

Can you imagine how Stanford would fare against LSU’s speed?

And what can we say about Luck? He wasn’t horrible, but he didn’t help his Heisman hype. This is the second straight year that Luck played well against Oregon, but he wasn’t his best.

It looks as though Stanford’s players are looking to Luck to pick them up when things aren’t going well, but he only has so much magic in his arm and legs.

Another key in this game was Oregon’s ability to convert fourth downs into touchdowns. On each play, Stanford looked flustered, while Oregon’s Chip Kelly had a smirk on his face on the sideline.

Yep, Chip Kelly’s arrogant side was on full display in Palo Alto, Calif. It’s almost like he knew something the rest of us didn’t. Many felt Stanford’s defense was up to the challenge. Clearly they weren’t.

Stanford had been allowing only 16.6 points a game, but Oregon’s offense exposed the Cardinal defense for what it really is…overrated.

Even as Stanford’s offense tried to rally the team, the defense couldn’t come up with a big stop or turnover in the second half.

If this defense plays like this against Notre Dame in the season finale, the Irish could pull off an upset.

So in the end, this game has opened another opportunity for everyone to get that LSU-Alabama rematch. The only thing standing in the way now is Oklahoma State, which must get past Oklahoma.